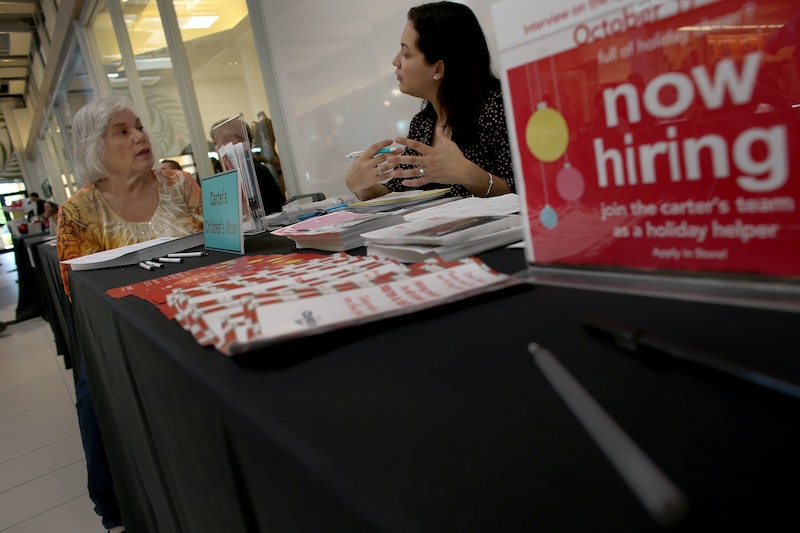 Hunting for a new position can be as soul-sucking as the job you are trying to ditch. There are few things I found more degrading than writing a cover letter, boasting about my accomplishments and begging for a chance. In a city with an unemployment rate of 7.7 percent, job-hunting is now a competitive sport. Interview skills are now more coveted than my Hacky Sack skills were in Vermont. And one of the most stressful parts? Figuring out what to wear to a job interview.

If you grew up with my father — or a similar parental figure — you've had interview skills drilled into your head since your Sweet Valley High books were suddenly replaced with "Project Management for Dummies" (Pops got a little ahead of himself). Of course all through my twenties, I bitched and moaned about the drills he would give me before landing a major interview and tattle to my mother that he was making me nervous "If you're nervous than you aren't ready," my dad would exclaim in the background while my mother coo'd "Sweetie, if they don't hire you than you don't need them anyway." Gee, thanks mom, but as it turns out, I do need them because, you know, bills.

As it turns out, my father provided me with some insane interview skills. For this punk rocker, it was really a chance for me to exercise my acting skills and charm the pants off of an overpaid executive that spent his weekends "on the boat" and his summers swimming with dolphins in Bali. Eventually, those interviews came so naturally to me, that I got to focus on the serious stuff: The Aesthetics.

Being in resource and project management for years gave me some insight into the most blatant outfit faux pas that were made in interviews for non-creative jobs. Dressing for an interview is a completely different process than dressing for the job itself. Most of us don't have to wear a suit to the office after the initial interview and first week of sizing up the office attire. That being said, dressing for your employer and not yourself just once to land your dream job should be a no brainer — one would think anyway. Here are 5 must-remember guidelines for when you're getting dressed for that big interview.

Sadly, your nail beds should probably be short and neat during your first meeting with a potential employer. The most important thing is not the pattern, it's the length. Keep your nails short and neat, and if you can't give up polish, go for neutral shades of white and beiges. Blatantly fake nails are a no-no for a job interview, so keep the funk to yourself until you've signed the dotted line! All this being said, however, always keep in mind the position you're applying for — if you're going for a job in the fashion or beauty industry, tastefully cool nail art could actually help prove your skills.

Wearing wrinkled clothes is clearly not ideal for any occasion, but if you typically shove your clean laundry into an overcrowded drawer or crumble it up when you take it out of the dryer, chances are your life is often filled with wrinkles. Showing up to an interview with wrinkles is going to give your potential employer the impression that you are disheveled and unorganized; which is the opposite of what anyone wants for a perfect fit.

When I show up to my restaurant job and realized my coworkers are all in short skirts while I'm in slouchy pants, I silently curse myself and run home and change. Let's face it, no one gives a shit about my outfit as a waitress — they want me to be friendly, easy on the eyes, and to keep the drinks coming. This is completely different on an interview. Even an interview for a restaurant job, show up dressed like Ally McBeal and you are most likely getting short-listed. Once you nail your interview and crawl up the corporate ladder, you can define sexiness with low-cut tops and short skirts if you so desire, but until then? Play it safe and remember that the world is filled with assholes that will make snap judgments based on the length of your dress.

4. Not Too Much Makeup

One thing I found amusing when I first started my corporate journey was that no one wore makeup to work. On the weekly happy hour outings or office holiday parties, the restroom was completely packed with women applying makeup and exchanging their modest flats for colorful stilettos. In 2012, managers sites like Askamanager.org stated that a candidate wore "too much makeup" on an interview. This is the ultimate catch 22 for women; you're often judged completely on your looks, but noticeably enhancing your looks on an interview makes it seem like you are using your appearance to get ahead instead of your mind.

In 1960, during the presidential debate between Nixon and JFK, voters weren't impressed by the sweats of Richard Nixon. Kennedy appeared calm under pressure and thus quickly gained the public's trust and approval while Nixon was a hot mess. Sweating is a sign of stress and if you are stressed before you've even gotten the job, your employer is likely going to assume you aren't going to be able to play with the big dogs. If you are driving to your interview and nervous about the sweats, keep your blazer neatly hung up so you can stay cool and double up on antiperspirants. Believe it or not, your interviewer will appreciate if you smell good. You can also try these tips to calm over-active glands.