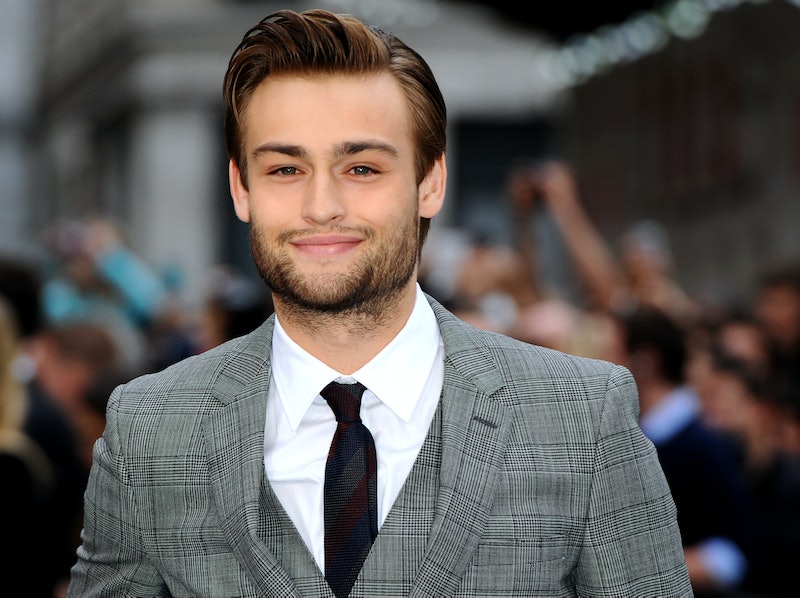 There's a good chance that you haven't heard the name Douglas Booth yet, and you know what? That's fine. I won't judge. He's only the next big thing in Hollywood and about to take over all of our screens, but WHATEVER. I'm here for you, and because I'm here for you, you need to hear this friendly PSA that will no doubt be delivered by President Obama himself one of these days: Douglas Booth is a drop-dead gorgeous, talented British actor, and he's here to slay.

If you're one of the lucky humans who have happened to have heard of Booth already, you'll know that this English import got his start on television by playing Boy George in Worried About the Boy, a 2010 made-for-TV movie that eventually led him to nab a role in The Pillars Of The Earth mini-series later that same year. While both of those achievements are all well and good, it wasn't until he was cast in the movie LOL, starring Demi Moore and Miley Cyrus, that he made his way into the (my) hearts of the general population. Recently he was spotted by paparazzi hanging with former co-star Cyrus, but don't start planning a "Wrecking Ball" themed wedding quite yet. Booth (thankfully) shut down the relationship rumors when he told E! News at the Toronto International Film Festival that she's "just a friend."

So who is Booth really dating? And why was he at TIFF spilling not-so-secret secrets about his not-so-relationshippy relationship with an uber-famous pop star? Well, at the moment it appears that Booth is happily single, despite a date with Taylor Swift earlier this year after which, reportedly, he rebuffed her advances. A "friend" of Booth's spilled to the New York Daily News:

Doug is a young guy and is enjoying the single life, [and] he was quite taken aback about how keen Taylor was. She has been in touch with him, but he just wants to be friends.

It's okay Tay, just shake it off.

As for being at TIFF, he was there to promote his new movie, The Riot Club. The movie, which also stars Hunger Games alum Sam Claflin and Downton Abbey’s Jessica Brown Findlay, is about students attending Oxford University who end up getting in over their heads when a night out with members of an exclusive dining club at a pub gets way out of hand. It sounds like a serious version of Mean Girls, but with extremely good looking actors with accents, and possibly a murder (?!?!?). Um, count me in.

Booth is also set to appear as Titus in the sci-fi epic Jupiter Ascending alongside Hollywood heavyweights Channing Tatum and Mila Kunis, and in the much-anticipated adaptation of Pride and Prejudice and Zombies (fingers crossed he’ll play Mr. Darcy), so I hope you're prepared to accept a whole lot more Douglas Booth into your lives, world. He'll be worth it. #trust