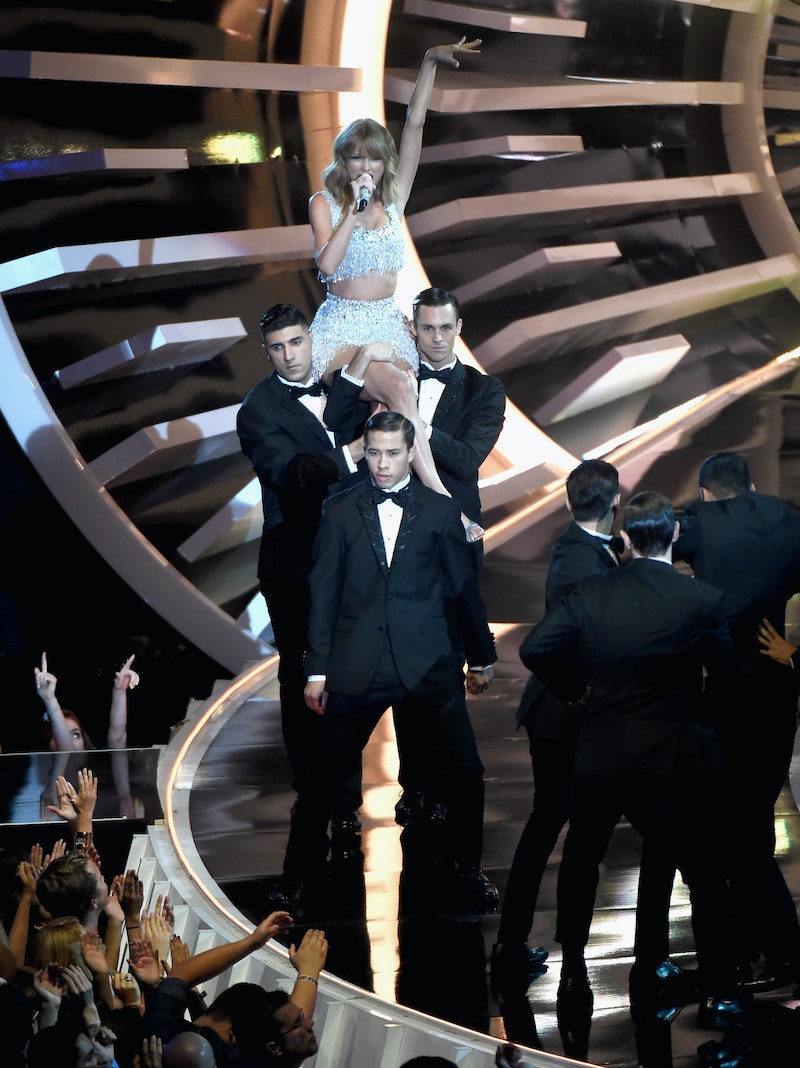 A killer new single, the cutest haircut in the world, and absolutely no dance skills whatsoever: When combined, these traits create the one and only Taylor Swift. Usually, I spend every award show looking forward to seeing Swift's awkward dancing in the audience, but on Sunday, she treated us to something even better. Taylor Swift's VMA performance featured awkward dancing on stage. Swift performed her brand-new single, "Shake It Off," that celebrates those of us who have absolutely no chance of ever starring in a Step Up sequel.

Lucky for Swift, I was totally predisposed to fall in love with everything about her performance — especially when you consider that, in the past week, I've played "Shake It Off" about 7 million times, according to iTunes. Who wouldn't adore someone so self-deprecating and well-dressed, all at the same time? But this is the year of self-proclaimed change for Swift, so does that mean she planned on hair-flipping her way into a totally unprecedented performance this year?

In VMA performances past, Swift delicately addressed her 2009 run in with Kanye West and strummed a red guitar while reminding us that she and her ex-beau are never, ever getting back together. This time around, though, Swift's going for something a little different. About to release her first fully-fledged pop album, Swift has officially given us a taste of what's to come.

And what is to come, exactly? Based on Swift's VMAs performance, what's to come is sparkly, it's made of crop tops, and it includes a league of men in tuxedos straight out of The Great Gatsby. Yeah, I'm on board. Can I just live in Taylor Swift's world from now on? Thank you. (P.S., I think if people who were actually alive in the 1920s had a Taylor Swift to listen to, they would have been a lot happier. Just saying.)

So the performance is going on, and it's a little more boring (and is drumming up way less controversy than her music video) than I had hoped. And then? Homegirl jumps on top of a giant numbers arranged to read "1989," and her tuxedo-clad gentlemen are poised to catch her at the bottom. But then, in true T. Swift fashion, she hesitates. And much to the delight of the audience, we hear her say, "No. One second. I don't care if it's the VMAs. I'm not jumping down there. There's all kinds of people getting bit by snakes. That's dangerous."

And having made her reference to Nicki Minaj's earlier "Anaconda" mishap, an out-of-breath Swift makes it back to the stage and finishes the performance in one piece.

Taylor Swift. My heart. Once again, you have captured it.

Now that the first performance of the 1989 era has officially concluded, I can say this with confidence: If this album is nearly as adorable as Tay shaking it off on the VMAs stage, I'm in.