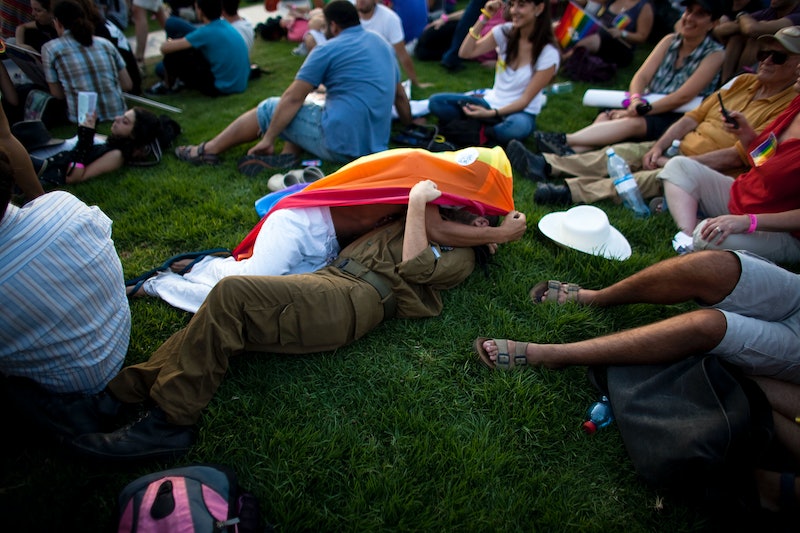 Ladies and gentlemen, start your engines — Vasalgel, the non-condom male birth control, will be here in 2017. According to a recent press release from the Parsemus Foundation, the non-profit organization spearheading the research behind Vasalgel, clinical trials with humans are scheduled to start next year, and considering that everything else has run on schedule thus far, you can expect to see Vasalgel on the market by 2017. That, my friends, is something to look forward to.

How does Vasalgel work, exactly? While the drug isn't exactly as easy as a pill or as superficial as a condom, it is still relatively quick and painless. Vasalgel is actually the name of a "polymer hydrogel" that is injected into a man's vas deferens, the vessels responsible for transporting sperm. Once Vasalgel is injected, it forms a "semi-solid plug" that blocks the flow of sperm, which makes it significantly more difficult for pregnancies to occur. The procedure is actually very similar to a no-scalpel vasectomy, but with one very noticeable (and welcome) difference — it is reversible.

If a man later decides that he wants to have children, another injection effectively washes the plug out of the vas deferens, removing the block, and allowing sperm to flow freely once again. Each injection is purported to be essentially pain-free, and patients can expect to be off the table and out of the doctor's office in 15 minutes flat.

For the past several months, as hopeful as all this talk has sounded, there has been limited proof to demonstrate Vasalgel's effectiveness. But with the Parsemus Foundation's press release, all this changes. Vasalgel trials with baboons have seemingly proven highly effective thus far. Three male baboons were first injected with the drug six months ago, and last month, they were each "moved into enclosures with 10 -15 females." From there, they were allowed to do a bit (or a lot, I suppose) of monkey business, and so far, there have been no pregnancies. Coincidence? Or scientific breakthrough?

But scientists are wary not to count their chickens before they hatch, and will be leaving the male baboons with their female counterparts for a few more weeks to ensure that none of them are left with child.

And to ensure that these male baboons have not been fated to a lifetime of infertility, next month, researchers will be giving the monkeys the second injection to undo the effects of Vasalgel. Previously, scientists successfully reversed the process in rabbits, and it seems that baboons will similarly regain their potency.

Vasalgel will also undergo further clinical trials with yet another group of baboons, five of whom already received their injections last week. A few more are scheduled for the near future, and will be allowed to mate with fertile females for either three or six months. At the end of all the trials, the procedure will be reversed, and the baboons will (hopefully) be able to reproduce normally once again.

Assuming that there are no hiccups in these procedures (and thus far, everything has gone almost perfectly according to plan), this will put scientists in a solid position to begin clinical trials with humans at the beginning of next year. This remains in line with projects made on the Parsemus Foundation's FAQ page, which estimated that initial human trials would begin in 2015, and that larger human trials would progress throughout 2016.

As long as there is scientific evidence of Vasalgel's effectiveness as well as sufficient public demand, the revolutionary birth control method should be available within three years.

This would represent an enormous and much needed leap forward in the birth control industry. For years, male birth control has been relegated to only two options: condoms and a vasectomy, and as such, it seems that much of the burden of safe sex has fallen upon women. While we are almost expected to take daily doses of pills or implant IUDs to prevent pregnancies, men have seldom had the opportunity to take the burden of responsibility upon themselves and find a way to stop sperm at its source. As Elaine Lissner, the director of the Male Contraception Information Project and of Parsemus Foundation pointed out in a January op-ed for the New York Times,

In the effort to improve family planning options, we’ve somehow overlooked half of humanity: men haven’t gotten a new option in more than a century.

With the recent Hobby Lobby decision that suggests that corporations maintain some form of control upon their female employees' bodies, it is high time that men got their act together and got into the game. And by the way, the Hobby Lobby decision still covers vasectomies. So perhaps Vasalgel would fall under the same category. After all, if both parties are meant to enjoy the act, both should be adequately prepared for it.

And it seems that both parties are extremely excited about the possibility of Vasalgel — as of January, Lissner noted that over 18,000 Americans had expressed interest in the clinical trials of the drug. But despite public interest, Vasalgel requires one more critical ingredient to make it out of the lab and into the public sphere — funding.

While the Parsemus Foundation's goal is to make Vasalgel as affordable as possible (currently, Vasalgel will be available for significantly less than $800, and about the same price as a flat screen TV), having savvy backers will be key to getting the product to the market. Unfortunately, Big Pharma might not want to see Vasalgel on the market, as it would greatly decrease profits from the booming, multi-billion contraceptive industry. As Samantha Allen of The Daily Beast suggested, "Why sell a flat-screen television to a man, after all, when you can rent one to a woman for a decade?"

But it seems that with a product this revolutionary and this mutually beneficial, Vasalgel can only be headed for success. And if that's the case, it will make 2017 a very, very good year.

More like this
Here’s Where The NHS Nurses’ Strike Currently Stands
By Sophie McEvoy
7 Challenging Yoga Poses That Turn Up The Heat
By Carolyn Steber
How Many Burpees Should You Do Per Day? Here’s What Fitness Trainers Say
By Carolyn Steber
The 11 Benefits Of Aerial Yoga, According To Trainers
By Carolyn Steber
Get Even More From Bustle — Sign Up For The Newsletter
From hair trends to relationship advice, our daily newsletter has everything you need to sound like a person who’s on TikTok, even if you aren’t.