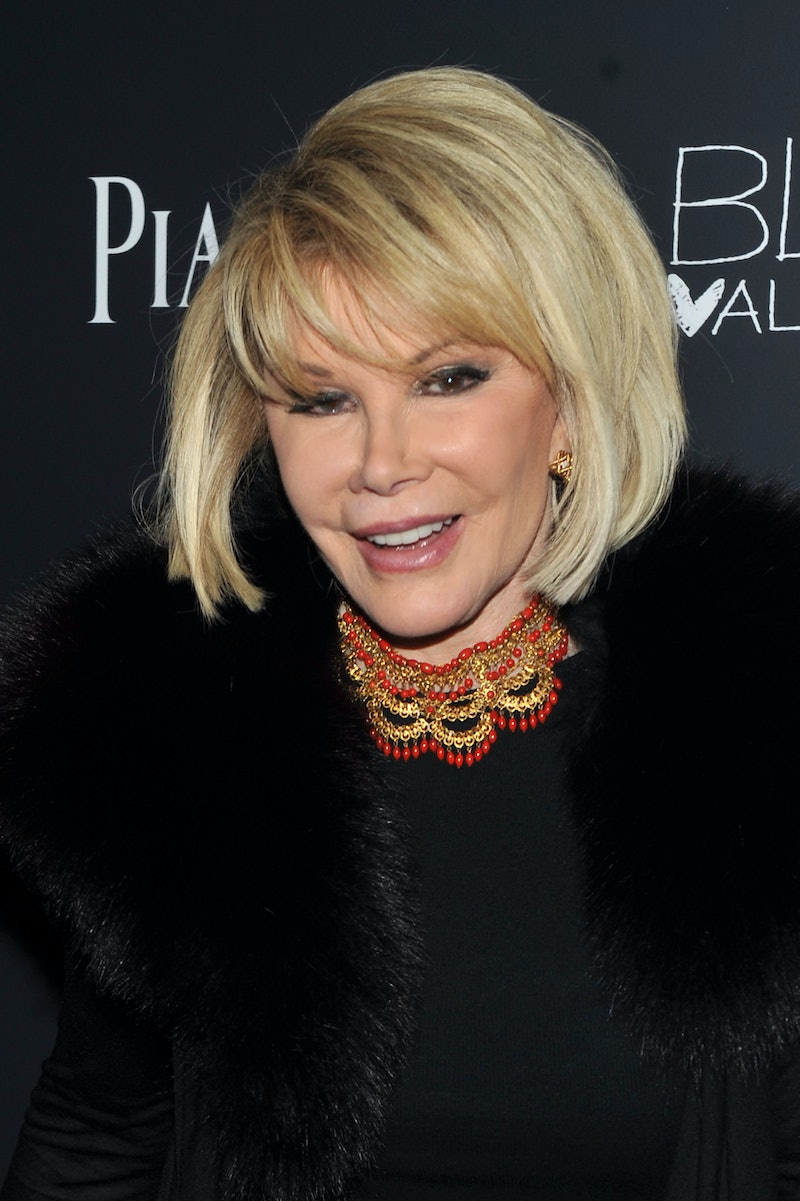 Ever since Joan Rivers passed away, the clinic where she was doing a throat procedure has been under investigation. Rivers stopped breathing during the procedure at Yorkville Endoscopy and had to be rushed to the hospital, where she later died at the age of 81. According to TMZ, Rivers' autopsy revealed no clear cause of death, but that hasn't stopped grieving fans from bombarding Yorkville Endoscopy with death threats and criticisms before we have all the facts. The New York Daily News has a rumored theory and it's incredibly sad: Rivers had an unplanned throat biopsy that went horribly, horribly wrong.

Their information comes from an "anonymous medical source", so it should be taken with a grain of salt rather than as absolute fact for right now. However, it's a plausible explanation. Rivers was having a routine surgery on her vocal chords when, according to The Hollywood Reporter, a doctor spotted something on her vocal chords. Another doctor volunteered to do a biopsy on the mysterious thing, but Rivers' vocal chords seized and she stopped breathing.

The source goes on to say that "such procedures are generally only performed at hospitals, and Rivers might have recovered had she been in a hospital when it occurred". The fact that this was tacked on to the end of the story makes me, well, a little suspicious. After all, everyone is eager to blame the clinic for Rivers' fate and it's already obvious that something went wrong during her routine procedure; making the statement that Rivers might have recovered had she been in the hospital for the procedure just sounds like an unnecessary stone throw.

Honestly, we have no way of knowing that and, in any case, of course it's true. Rivers would have had a better chance of recovering from any procedure or illness had she been in a hospital when it happened. That's what hospitals are for. However, she wanted to have this procedure done at a clinic and the clinic did the best they could, rushing her to the proper care as quickly as possible. I'm not saying that they're blameless and I'm certainly not blaming Rivers for her choice, but without solid evidence of malpractice then this is just adding fuel to the fire that has already been stoked against the clinic.

Yorkville Endoscopy has had to hire extra security to protects its workers in the aftermath of Rivers' death and, again, the investigation has yet to uncover any evidence of malpractice. Condemning them before we know more is wrong and won't achieve any vindication for Rivers' untimely death. All it's doing is punishing both people who had nothing to do with the procedure just to punish people who might have been a cause. If this story turns out to be true, it's an incredibly sad and disappointing one, but until we know more it feels wrong to pass judgment.