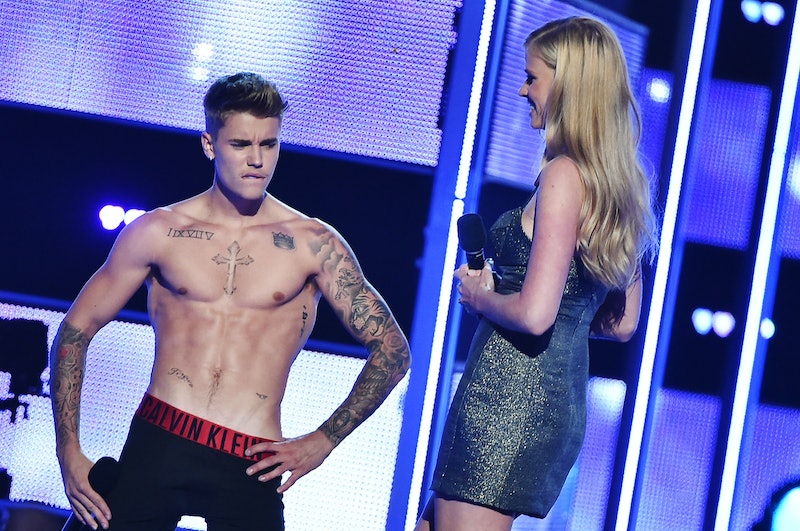 Real life has turned into a scene from Magic Mike, you guys. Listen, we've all heard of Justin Bieber. Better yet, we've all heard of what a jerk Bieber is. This is the kind of guy who can't take a vacation to Canada without news breaking that Bieber has been arrested for assault. This is the guy who made the list of Most Hated Men in America alongside murders. This is the guy we can't convince Selena Gomez to stay away from. There are lots of reasons to hate Bieber, so this comes as no surprise. Apparently, Justin Bieber was booed at Fashion Rocks and he handled it in a very unique way. Like, he started stripping.

Bieber's appearance at Fashion Rocks was a surprise, but when he joined model Lara Stone on stage, the audience began booing pretty hardcore. Bieber and Stone were just introducing Rita Ora's performance, but apparently Bieber had a skit of his own to perform. In a clearly pre-planned move, Bieber began stripping off his clothes until he was down to his Calvin Klein boxers while Stone stood quietly by lacking the OH MY GOD PUT YOUR CLOTHES BACK ON YOU CRAZY CHILD expression one would expect from such a move if it weren't scripted.

Naturally, Bieber finished by striking a pose because by that time there were more screaming members in the audience drowning out the booing than there were disapproving members of the audience willing to strip their own shirts off to give it to Bieber. I mean, Bieber might not be Zac Efron, but he's still pretty cut. And as the success of Magic Mike proved, most of us are totally willing to shell out money to see celebrity strippers. Or any strippers. Movie or otherwise, really.

Ultimately, I'm not disparaging Bieber for what he did. Quite the contrary. It's so rare for me to find anything he does funny these days that even the fact that he clearly planned this stunt wasn't enough to take the shine off the fact that this was a thing that actually happened. Hopefully he doesn't make a habit of stripping his clothes off the next time people start booing at him because that would be a pretty inappropriate way to deal with any other situation.

Check out the show below.