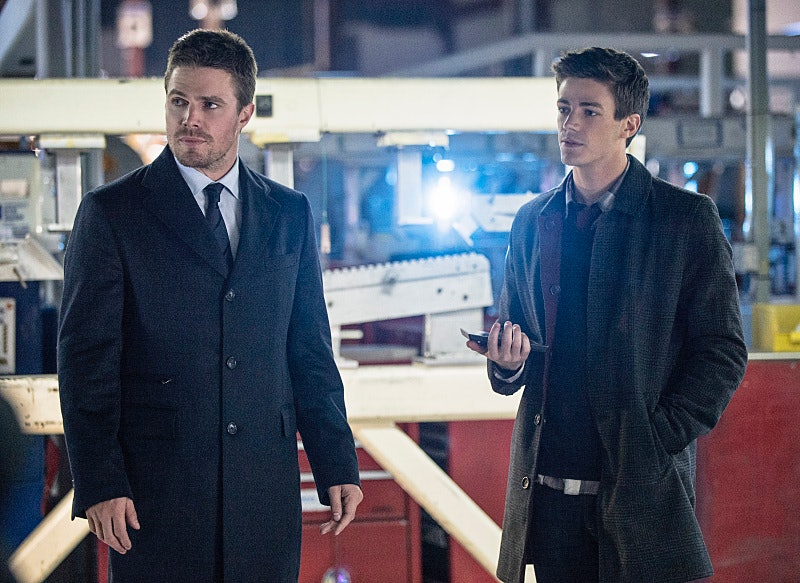 The CW's new series The Flash has yet to begin, but people are already excited about the possible storylines and characters the new show will feature from the DC Comics universe. But the most obvious characters the show will definitely bring back from time to time are those from The Flash's predecessor. The Flash and Arrow will have two crossover episodes, which will occur in both series' eighth episode this season, possibly sometime around November, according to Entertainment Weekly. Apparently the first crossover episode of the two, entitled "Flash vs. Arrow," will feature the heroes clashing with one another, as producer and writer Greg Berlanti told FlashTVNews.

In the very first episode of The Flash, Oliver Queen makes a cameo in Central City while Episode 3 will feature Felicity Smoak, Barry Allen's (aka The Flash) one-time love interest from Arrow. So why will Oliver and Barry be butting heads just a few episodes later? Is it a professional turf war or is there a more personal reason? It could be any number of issues, but one thing's for certain: The two will have to get over this spat if they're going to take down a few big baddies together. Here are a few possible causes for Oliver and Barry's coming fight.

Oliver Is Stepping On Barry's Turf, Or Vice Versa

By the time The Flash reaches its eighth episode, Barry will probably be getting comfortable in his role of hero for Central City. But since we already know Oliver will show up in The Flash pilot, maybe he has been popping up again and again to take on bad guys on Barry's turf before Barry hears about the trouble. Or maybe Barry starts to get a little cocky and zips his way down to Starling City every once in a while to clean up the streets before Oliver and his team can even get there. I'm sure the mentor and mentee would have some conflict if this were to happen.

A Villain Is Turning Them Against Each Other

Arrow's Clock King will make an appearance on The Flash this season, as reported by TVLine, so perhaps another big bad with more power over Barry and Oliver's personalities and interactions will try to sabotage the heroes' working relationship in some way. Or maybe this villain is causing trouble in both cities and the heroes keep getting in each other's way when trying to catch him or her. Basically, things won't be looking up for the first episode in The Flash/Arrow crossover.

A Love Triangle Is Brewing

We all know from Barry's first appearance on Arrow in Season 2 that Felicity and Barry have a very special relationship. Felicity even visited the young hero in the hospital while he was in a coma after the particle accelerator/lightning accident. We also know that Oliver and Felicity have been growing closer and closer over the years. In fact, the two will even go on a date in Season 3. Maybe Oliver finally gets fed up with Felicity and Barry's relationship, and vice versa. Then the two heroes will definitely have a serious beef that needs squashing, one where Felicity should make the final decision.

No matter what happens, one thing is for sure: The heroes better make up quick in this crossover episode. There are too many villains in the DC universe; the Flash and Green Arrow should be fighting together instead of fighting with each other.