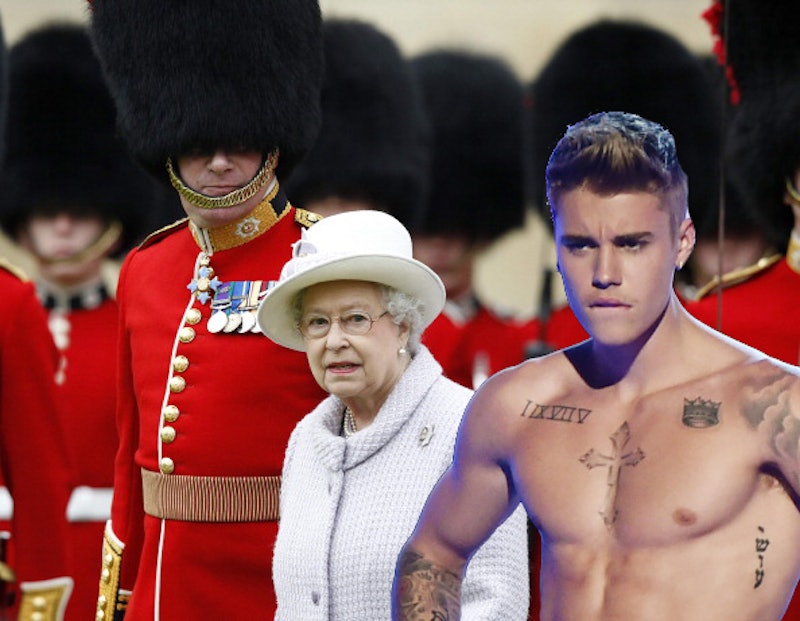 So Justin Bieber has decided to leave his music career behind and begin a more popular career in the bright world of professional stripping. OK, so that's not true. But Bieber made a surprise strip appearance at the Fashion Rocks show, which was a bold move considering the audience was booing him at the time. Model Lara Stone was introducing Rita Ora when Bieber made his unscheduled (though not unplanned) appearance and the loud booing from the audience only came to a stop when people realized that Bieber had apparently shown up just to strip for them. I mean, that kind of warrants a moment of silence, you know?

All I'm saying is, I, for one, was not expecting Bieber to start ripping his pants off on a stage full of people, let alone to start flexing while wearing nothing but a pair of Calvin Klein boxers. I'm sure the audience wasn't expecting it either. But now that the shock has faded, I can't help but wonder if Bieber is going to start making repeat performances of his strip show just for the shock value. It was a more popular stunt than any of the other stunts that he's pulled lately, after all. In a world gone mad, we could start seeing a shirtless Bieber in the most bizarre and random places.

For example, imagine seeing a shirtless Bieber in...

That's really not helping your case, Nick. Or maybe it is. Just tell everyone that Bieber is the one who kidnapped your wife. Right now, he definitely looks guiltier than you.

You know what's better than Ross' lovemaking? Justin Bieber stripping. Sorry, Jimmy Kimmel, but Bieber's surprise show would definitely take some of the spotlight off you in this scene you wrote.

Forget the offensive animal stereotype that was the Taco Bell chihuahua and start considering a shirtless Bieber the new face of the Taco Bell franchise. For every enchilada you buy, he'll do another surprise show in the Taco Bell parking lot (alarming those of us who just wanted the enchilada and nothing else).

No shirt, no shoes, no library card, am I right?

I know he's been doing Bible study, but this is ridiculous.

Bieber wouldn't be the first star to take a ride on the New York City subway, but he'd certainly be the one to get the most of a certain kind of attention. Although, to be honest, shirtless men aren't as unusual on the MTA as you might think.

The safety and protection of the queen of England is his utmost priority, outside of his lucrative stripping career. And we all know that Queen Elizabeth has a great sense of humor.