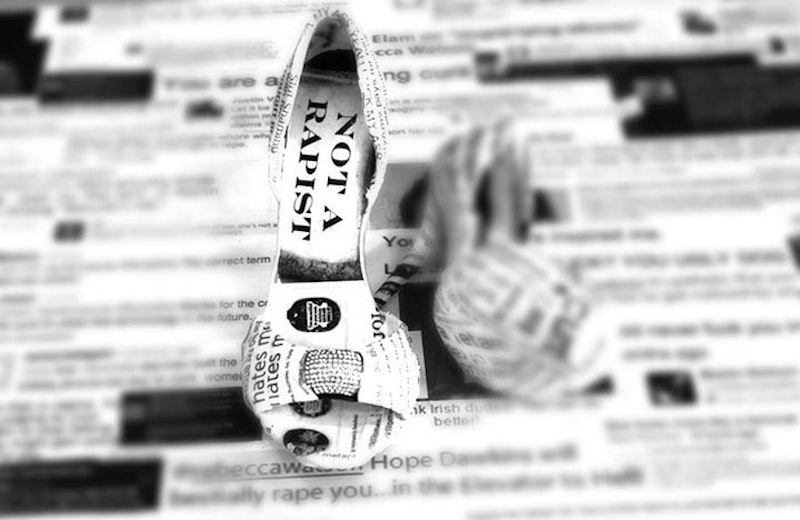 If you have any sort of online presence, odds are you’ve suffered at least some harassment. For women, that harassment is often gender-based — which, as TIME points out, studies have found to have very specific, harmful effects throughout history. But artist Amy Davis Roth’s upcoming installation, A Woman’s Room Online, seeks to take all the misogyny, vitriol, and abuse that women so frequently experience online and turn it into a powerful statement — hopefully finally forcing the world to take the issue as seriously as it should be taken.

A collaboration between Roth and the Los Angeles Women’s Atheist and Agnostic Group, the installation will take the form of a free-standing eight-by-10-foot room located at the Center for Inquiry-Los Angeles. It will be suited up in all the trappings any woman’s office might have; however, each of those objects will also be covered with real messages women have received via Facebook, Twitter, and email — abuse that has rained down on them purely for being women who write online. The messages come from Lindy West, lately of Jezebel; from Amanda Marcotte of Slate; Skepchick’s Rebecca Watson; from Soraya Chemaly of such publications as Salon, The Guardian, and HuffPo; and from many others, including Roth herself.

And the words are vicious — so vicious that I can’t do them justice by merely describing them. The image seen up top has most of those words blurred out, but — and I’m placing a warning here, because what follows is explicit, awful, and possibly triggering — you can get the full force of them here, and here, and here. The Internet is incredible for so many reasons, but these messages display one of the worst things about it — and the worst parts of humanity.

The exhibit, Roth writes on Skepchick, “is meant to put you, the viewer, in their shoes if only for a moment. See what it is like to be obsessively judged based on ‘fuck-ability,’ ‘rape-ability,’ as an object, or alternatively as what seems to be a target in a socially accepted (or otherwise ignored) game of online stalking, harassment, and silencing techniques.” It intends to dispel the beliefs that online spaces aren’t “real,” that this sort of harassment is “just words,” and that we should just brush it off, ignore it, or “grow a thicker skin.” And it doesn’t come a moment too soon.

Slate’s Amanda Marcotte wrote with great eloquence on Monday about why she’s permanently turning off her Twitter mentions feed:

“Why did the reaction bother me so much this time? The long weekend, spent with my boyfriend and good friends, was a reminder that my life, which is busy and social and has a lot of love in it, couldn’t be any more different than that of the lonely, bitter hag that the harassers declare I must be day in and day out. The contrast between my actual reality and what I am being told about myself all day long, every day, on Twitter stunned me. I realized it’s not enough to keep reminding myself that the harassers are speaking more about what they wish to be true than what is true. Constantly reminding yourself that you do, in fact, have it good drains the energy you have to enjoy having it so good.”

The emphasis is mine; that’s the part that resonated the most for me. No matter who you actually are, the types of people firing off the endless strings of abuse will often be convinced that they know everything about you, that everything they think they know about you is right, and that you, as a result, are worthy of harassment. Comparatively speaking, my own experiences have been mild. But even when it’s just people saying things like, “You must be ugly, so your argument is invalid,” as opposed to threats of physical harm, it gets to you. Whether the words are “mild” or dangerous enough to require the immediate seeking of safety, no one should have to deal with them or come up with strategies to avoid them. And more importantly, no one should even be saying these things, to anyone, regardless of their gender, race, or creed.

A Woman’s Room Online will be available for viewing at the Center for Inquiry-Los Angeles from September 13 through October 13, 2014. Go there. Tell your friends to go there. Get as many people there as you can. This is too important to miss.

More like this
The Correct Way To Start An Advent Calendar, Explained
By Kaitlyn Wylde and Jay Polish
Here’s How To Make The Spotify Music Festival Lineups Taking Over Instagram
By Alexis Morillo
How To Switch Back To A Personal Instagram Account From A Professional One
By Alexis Morillo
Here’s Why You Can’t Create A Playlist On TikTok
By Alexis Morillo
Get Even More From Bustle — Sign Up For The Newsletter