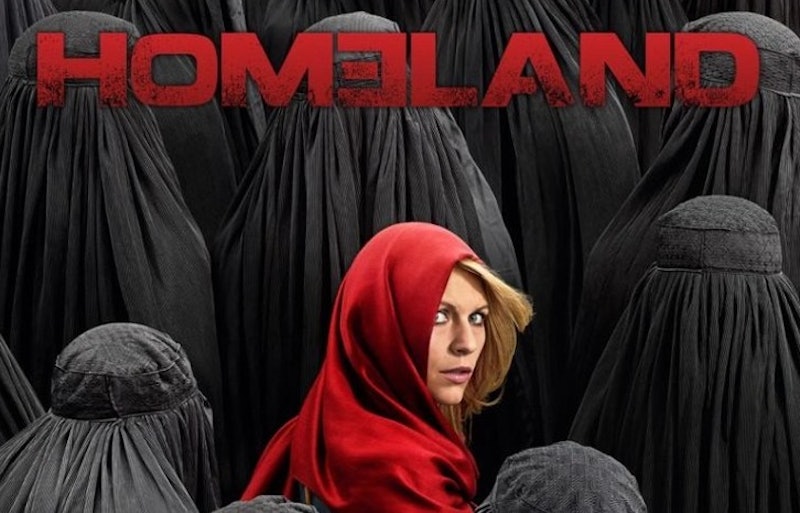 As Weird Al interpreted in his Emmy TV themes song, Homeland can roughly be translated to "beautiful woman, ugly crying." And in new teaser for Season 4 of Showtime's Homeland, we get a whole lot of Claire Danes as Carrie Mathison, looking beautiful and troubled, and yes, even crying a little bit, as per usual. Homeland comes back on October 5 with a double episode, and the new two-minute trailer illuminates a lot of what's gonna be going down in the new season. It's a fast-forward six months from the end of season 3, which was officially the end of Brody.

A little recap: season 3 finally saw the end of the "Is he or isn't he" a terrorist game that defined Brody; and, in one final act of heroism, he dies for the good ol' US of A in the most horrible of manners—he's hanged. But! It turns out that he left Carrie pregnant, and as we learned in the last trailer, she's since had her little fiery-haired daughter (who, eerily, looks SO much like Damien Lewis. Good baby casting). Also, Saul (the one and only Mandy Patinkin) leaves the CIA, but fret not, because he's good and present in season 4.

The new trailer shows that the times, they are a-changing, but some things always stay the same. Carrie's now in Istanbul—without her baby, which her sister scolds her for. In any case, she's the CIA chief there, and as we see in the trailer, Corey Stoll (the late Peter Russo from House of Cards!) is a CIA op named Sandy Bachman in Pakistan. Together, he and Carrie investigate a suspicious American attack on civilians in Pakistan, that they suspect, in true Homeland fashion, was an inside job. Also in the trailer: though Saul's left the CIA "officially," he's still around to take care of/cover for Carrie, thank goodness. Homeland just wouldn't be the same without Mandy Patinkin's beard.

So, some questions: is Bachman the new Brody? He seems shady, but hopefully the showrunners won't go so far as to stick the two of them in a relationship, because we've all had enough of Carrie's infatuation with nefarious characters. We also see Carrie offering asylum and protection to a young Pakistani boy whose family was killed in the attack—is this going to prove dangerous for her? I'm interested to see what their relationship is, and how he helps her investigate the attack. Will Saul come back to the CIA? Probs not. But hopefully this season Carrie heeds his direction a little more and doesn't totally let him down (which he will always forgive!) Carrie also accuses the slimy Senator Lockhart of treason in the trailer—could he have been involved darkly in the Pakistani attack? The final words Carrie utters in the trailer are "I'm so sorry." But what is she sorry for? That remains to be seen.

Homeland premieres on Showtime on October 5.