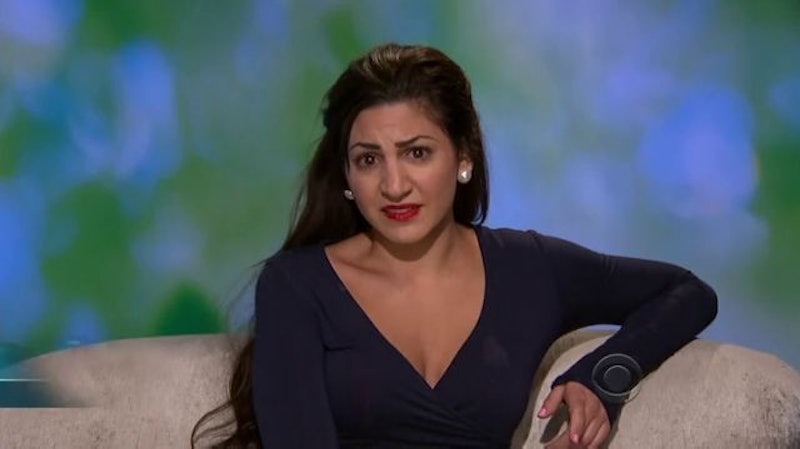 The saying is "Better late than never," right? Well that may not be the case for Victoria on Big Brother this week, as she finally stepped up and started playing the game — well, kind of. So far this season, Victoria has been that houseguest who is just "there." And when she played the Veto on Tuesday's show and had a 17-minute time, it truly was a face-palm moment. But Derrick, the true puppet master of Big Brother this season, was able to come up with the perfect way to use Victoria's forthcoming eviction — yet not so forthcoming, depending on the Rewind Button — to benefit his game. He is considering it his own "funeral."

Now, fans of the show know that there is one funeral on Big Brother that will go down in history. And that is Dan Gheesling's funeral. But throughout the game, Derrick has been compared to Dan Gheesling, which could be the inspiration of his plan. A few days ago, Derrick and Victoria came up with the plan to make it seem as if Victoria hates Derrick for betraying her, giving off the impression that Derrick has one less jury vote in hopes of Frankie bringing Derrick to the final two, if the situation arises. Victoria considers her performance of "hurt houseguest" her gift to Derrick. How sweet.

So Victoria finally steps up and starts playing the game, which is great. But the problem is, she's playing the game for someone else — frankly, something she has been doing all season. Victoria sees that there is no way she can save herself this week, which will hopefully change once the Rewind Button's power is revealed on the live show, but just because you are backed into a corner doesn't mean you should start making moves to benefit someone else's game.

Don't get me wrong, it is a noble gesture and Victoria is very convincing at making it seem like she is upset about Derrick's betrayal. But COME ON, play the game for yourself! Where was this passion when you needed to win a competition, or convince houseguests to betray their own alliance? How come you are finally starting to play the game the week you are supposed to be evicted?

It will be interesting to see what happens to the little charade once the Rewind Button is revealed. If by some crazy chance Victoria ends up in power after the eviction is stopped, she will most likely do what Derrick needs to be done, which is to get Frankie — the "competition beast" — out of the game. But if she doesn't win, there is a great chance that this week will just replay the same way.

More like this
Oh, How The Tables Have Turned On 'Love Island'
By Victoria Sanusi
The Week 'Love Island' Turned Into 'Disrespect Island'
By Victoria Sanusi
Kim Kardashian Reveals The First Text She Sent To Pete Davidson
By Jake Viswanath
These 10 Wild Real Housewives Fights & Moments Are Andy Cohen’s All-Time Faves
By Grace Wehniainen
Get Even More From Bustle — Sign Up For The Newsletter