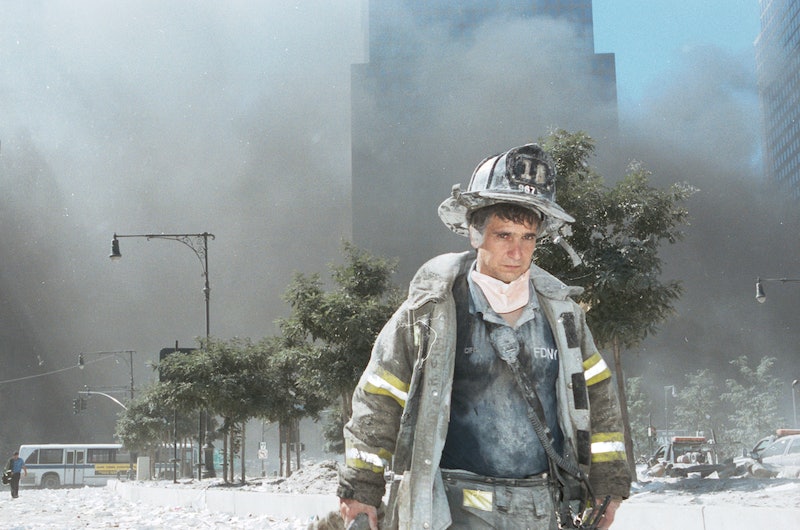 Today is Thursday, Sept. 11. It's been 13 years since the attacks that changed everything — American foreign policy, our domestic security and surveillance programs, our sense of security, the militarization of local police forces — forever. That terrible day, the nation watched in horror as nearly 3,000 Americans were murdered. Sadly, here's the thing: the 9/11 death toll is still rising, even today.

That's because the attacks weren't just hell on the victims of that day and their families — they also condemned countless first-responders and emergency personnel to awful medical maladies, which persist to this day. As The Telegraph reports, thousands of people are still developing fatal cancers after all this time, and it's believed to be a direct result of the toxic environment that spawned from the collapse of the two enormous skyscrapers.

In fact, it's so bad that more police officers have died from 9/11-related illnesses than were killed in the attack themselves, according to the Daily Mail. It's a massive health crisis for the people who, by all rights, should've been taken care of first and foremost.

Their health issues are linked to exposure to the Ground Zero site in the days, weeks and months following the towers' collapse are varied and intense. Emergency workers have succumbed to cancers and respiratory ailments, The exact number of emergency workers who've died from these ailments isn't clear, but what is clear that the total death toll from the attacks is now far higher than the nearly 3,000 victims who perished 13 years ago today.

And the awful thing is, it's getting worse — more than 2,500 workers at the scene reported suffering from cancer over the last year, which is more than double what it was 12 months ago.

The truth is, it's easy to point the finger at Congress for not having acted faster to help these people. You might remember that The Daily Show host Jon Stewart showed a fiery streak back in 2010, advocating for the passage of the James Zadroga Act, a bill to compensate ailing 9/11 first responders which had been failing in Congress.

Stewart's coverage, even devoting a show to interviewing sick first responders, was widely hailed as instrumental in pressuring Congress to pass the bill, but even today, hundreds of people haven't had their claims reviewed yet. Even worse, the window is closing for people to file their claims — the September 11 Victims Compensation Fund is only authorized to run through the beginning of October. New York lawmakers have been calling for an extension, including Mayor Bill de Blasio, according to the Poughkeepsie Journal.

This should not be a debate. This should be simply a march to action to help those in need.

Sad as it is to say, a lot more people alive today will be killed by the aftereffects of the attacks, regardless of the compensation they receive. There may possibly have been a time when a big, congressionally approved fund to provide preventive support to these heroes could've made a difference, though we may never know for sure.

But with over 2,500 workers now suffering, and the passage of their compensation bill taking an unthinkable ten years, it's now a certainty that the real death toll from 9/11 will be far higher than the 3,000 victims who died that day.