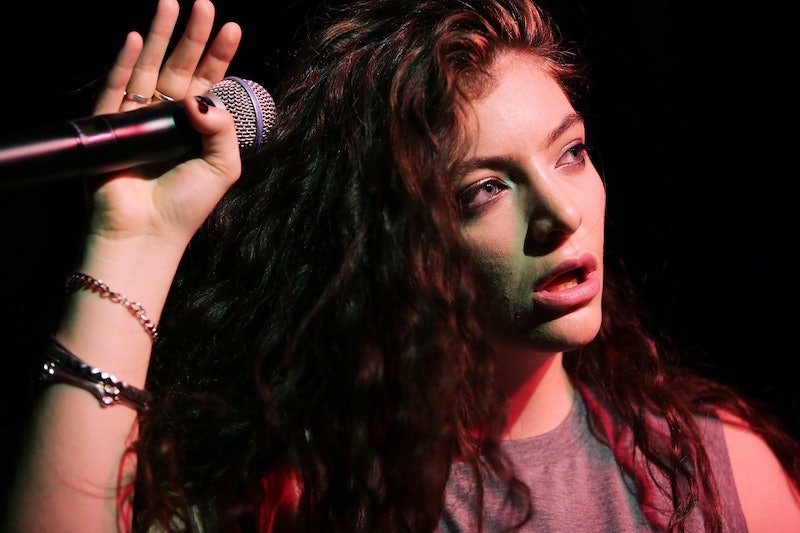 When you think of Lorde, you likely think about her haunting music, her intelligent and cool attitude, her truly personal style, and her shockingly young age. Lorde shook up the entire music industry when she was just 16 years old with the debut of Pure Heroine, and now at the age of 17, she's still got all eyes on her. In October's issue of Elle, Lorde talks about being 17 in a very grown-up industry, "Obviously, I am hanging out with more people now who are not teenage; I’m in different circles. But I am a teenager. My brain is, like, a certain age."

As a young woman who appears to be wholly in control of her image, Lorde is quite mature for being "like, a certain age." Yet, she still maintains and embraces all of the angsty, confusing, and enlightening moments that make up those teenage years. In fact, she uses them to her advantage when writing her songs. Lorde also commented on her age in a July interview with The Guardian saying, "I feel like I get away with less. But I’m exactly where I want to be." Not many 17-year-olds are that comfortable!

The New Zealand musical phenomenon grew up immersed in social media, which taught her very early on how to take the wheel when it came to self-promotion: "You can go on the Tumblr of any young person in the world and see people marketing themselves. Everyone my age is like that now. We’re all hyperaware of how we’re being seen."

Lorde is being seen as a musician and artist talented well beyond her years, but she is also a teenager who could wield a "whatever" with the chic coolness of Cher Horowitz. And people shouldn't forget that. Her statement on being a role model to fans in the Elle interview shows both her status and her age,

People have told me that I’ve helped them feel confident, like they can say things they want to say. They can talk about feminism in class without people calling them a lesbian. That’s so amazing that I can make someone feel like that.

It's clear that she understands the reach and importance of her work, but when she speaks candidly, she still sounds like the teenager that she is. Remaining true to herself and her age are important for her success considering the fact she holds the opinions of her peers higher than that of the industry. "The criticism I listen to most is what comes from people the same age as me; they’re the only people I care about liking my music," she said in the same Guardian interview.

If the rest of Lorde's generation are anything like her, then whatever comes after "millenial" will certainly inherit the Earth.