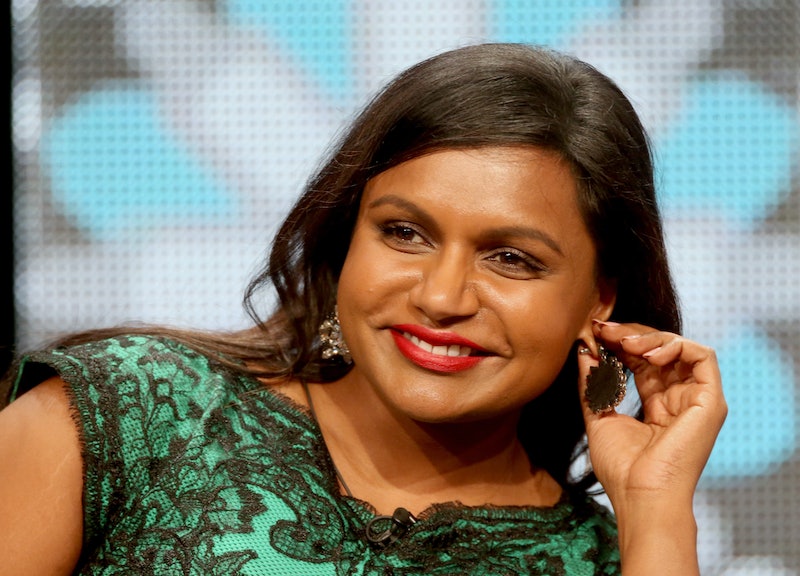 In a recent interview with Flare magazine, Mindy Kaling revealed a few things about herself, proving — as usual — that she is one of the most dynamic, smart, and incredible women in the entertainment industry.

We learn that The Mindy Project’s ratings haven’t been as high as Kaling hoped, and this may be due to the audience's lack of sympathy for Lahiri’s character. Kaling stated, “I don’t think about it a ton, but I was surprised by how much not just men but also women felt like they wanted her to be less selfish.” Kaling uses Kenny Powers of HBO’s Eastbound and Down as an example of an anti-hero a wide audience accepts, whereas characters like Kaling's Mindy Lahiri or Lena Dunham's Hannah Horvath face much more criticism for their innate objectivism.

However, Kaling is proud of her creation, and she won’t sacrifice the direction or essence of the show in order to people-please. Kaling stated, “Whether it stays on air or it doesn’t, I want to feel like it’s my show.” Such confidence has been criticized and deemed as “overconfidence,” but Kaling shuts that notion down by saying, “I’ve worked in television for 10 years straight. If I were a man, it wouldn’t be considered strange [to have confidence] at all.”

And when probed about her recent 35th birthday, Kaling shifted gears, sharing with her readers that she’s always wanted to have three kids — this is a goal she plans on meeting, and that she’s not stressing about marriage. Kaling said, “I’m assuming it will all go away, or one guy will be persistent and it will work itself out.”

So, how will all of this new information play out in her new book, Why Not Me? (which is set to come out in 2015)? Why Is Everyone Hanging Out Without Me? was published before The Mindy Project debuted, so a lot of Kaling’s focus was her family life, her nerdy and charming childhood, how she worked her ass off and ended up writing for The Office, a few chapters on friendship and relationships, body image, and instructions for her funeral. Much has changed in the last four years, so here are some topics I hope Kaling sheds some amazing, poignant light on:

1. How her mother’s death affected her directorial decisions, since Lahiri’s profession was very much influenced by Swati, who was an OB-GYN

Kaling’s mother was such a mentor for her in so many ways. In the interview with Flare, Kaling shared, “I was terrified of her, and I thought she was very glamorous, and I just wanted to emulate her all the time.” Kaling also emulated her work ethic and drive (and it clearly shows). Although I wouldn’t ever want to push a person into sharing something so personal, I was deeply touched when Kaling discussed just how important it was for her that her mother saw the show she was creating, a show that very much reflected her mom's profession and playfulness.

2. How Kaling used work as a way to cope with death

In a Vulture feature on The Mindy Project and Kaling’s mother’s death, Kaling discusses how she dealt with that loss. After she died, it seemed like the writer and actress went straight back to work, and that must have been such a tremendously difficult thing to do. As a writer, I wonder how I’ll deal with family deaths, because so much of your core and self go into writing and producing. How could the creative process not be disrupted by such a traumatic event?

3. How her experience on The Office helped her write her own show

Kaling not only nailed it as the Ryan/fashion/self-obsessed Kelly Kapoor, but she nailed it as a writer for The Office (and the show definitely took a distinctive turn for the worse after she left). What did she learn, and how did this knowledge and experience translate into The Mindy Project?

4. If writing and starring in her own program is different than writing for The Office (as well as her minor-ish role as Kelly Kapoor), and how so?

It must be stressful to be in charge of so many things. I mean, Kaling is responsible for more than her portion of a script; she owns the ENTIRE thing and has absolute veto power. What is that kind of power like?

5. If Kaling has experienced any sexism, since she’s one of the few female show runners in the industry

As she stated in the Flare interview, a gender imbalance obviously permeates Hollywood. How does she handle this?

6. If the backlash over Elle’s cover featuring a black-and-white Mindy Kaling was warranted, in her opinion

When I saw the cover of Elle after witnessing the Internet recoil with frustration about the close-up of Kaling, I too wondered why she didn’t get a full spread like the other female celebrities. But I read Kaling’s response to everyone’s problems with Elle , and she truly seemed surprised people were upset to this level. She claimed she felt gorgeous, not censored, or snubbed due to her body. It would be interesting to read more about this from Kaling’s perspective, since for all we know, Kaling chose this photo.

In Is Everyone Hanging Out Without Me? there is a chapter where Kaling discusses a photo shoot where the stylist only gives one non-size zero option. She excuses herself to go to the bathroom, where she cries but has an epiphany: This photo shoot is bullshit, she thought. So she marched up to the stylist and demanded the altered the dress that she wanted — that she didn't feel comfortable with the only plus-size dress offered. So, when I saw that Kaling allegedly had no issues with her Elle cover photo, I believed it; the Mindy Kaling I know would have fought her way to have the cover she wanted and deserved.

As well all know, Kaling is a fashion goddess. She looks good in everything, and I want to her to lay it all out. Where does she shop? What does she look for? What are her favorite styles? Give me the scoop, girl.

We got a vivid glimpse of her New York life, and little bit about Hollywood, but I want more. Does she run into Gwyneth Paltrow at Whole Foods all the time? Is there a juicery at every corner? What does she do when she's stuck in traffic on I-5?

9. What it’s like working with Chris Messina, aka Sexy, Broody, Italian Man I Want To Marry If I Were Single

Is he as amazing as is character is? Have they ever thought of dating IRL? Is he a beautiful genius? Does he have some really strange, embarrassing habits we should obviously all know about?

10. What’s it like making friends and maintaining those friendships when you’re so famous?

Does Mindy only have celebrity friends? How hard is it to maintain old friendships when every single girl on Instagram declares Mindy Kaling as her spirit guide? Is it weird making friends with super famous people?

11. What does Kaling look for in a relationship now?

Although she didn’t really make it a big focus in Is Everyone Hanging Out Without Me? she was, at some point, dating someone. Four years later, she now tells Flare she’s actually seeing a few guys, which is awesome. Whatever happened with her and her ex is neither here nor there, but I’d love to know what Kaling feels is important in a relationship. The same music tastes? Similar work ethics? Does he have to be a writer, too?

Personally, I think she should name her babies Michael, Jim, and Pam. But maybe that's just me.

Images: Videogum; Giphy(2); It's Just About Write; Head Over Heels

More like this
Watch The Emotional Trailer For Dolly Alderton’s 'Everything I Know About Love'
By Bustle UK
At 28, Minnie Driver’s Personal Life Was “Falling Apart”
By Kate Dwyer
10 Must-Read New Books Out This Week
By K.W. Colyard
Thank U, Ex
By Rosemary Donahue
Get Even More From Bustle — Sign Up For The Newsletter