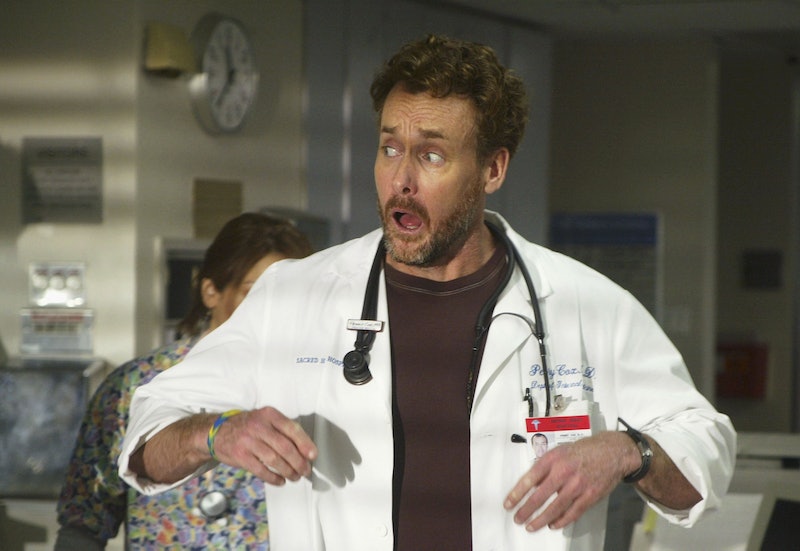 There's going to be a mini-Scrubs reunion, but it's between the last two actors you'd think to reunite. John C. McGinley, who played Doctor Cox on the show, and Christa Miller, who played his ex-wife Jordan, will both be on Season 2 of Ground Floor of the TBS comedy Ground Floor. The show is created by Bill Lawrence, who's coincidentally not only the creator of Scrubs but also Miller's husband in real life. McGinley stars on the show as Remington Stewart Mansfield, a big-time banker. In yet another coincidence, Miller will be guest starring on the show as McGinley's wife yet again, Allie Mansfield. Allie is described as "chic, brassy and artistic...the only person in the world who can control her husband." Hmm, sound familiar?

Although it may be surprising that McGinley and Miller will be playing man and wife yet again, it certainly makes sense that they were cast together. On Scrubs, Doctor Cox and his e-wife Jordan had some serious chemistry, whether they were happy and together with their son or (more often than not) at each other's throats. And Jordan was a serious ball-buster, so it sounds like Miller will be completely in her element in her role on Ground Floor.

Although it may not be even as close to the real thing as the strange Zombie Scrubs season, there's no doubt that there will be some serious Scrubs vibes from Ground Floor. And if that doesn't satisfy your craving for a Scrubs reunion, take solace in the fact that somewhere in California, Zach Braff and Donald Faison are probably hanging out...and most likely doing an "EAAAAAAAGLEEEE!" for old time's sake.