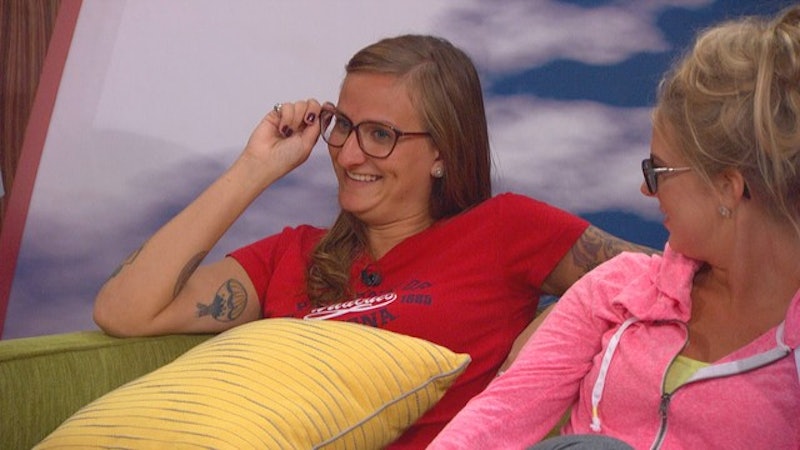 Remember when we all cringed when Big Brother 's Christine was evicted during the double eviction and released into the real world welcomed by a huge "Boo"? Well history sort of repeated itself when Christine joined the Big Brother jury after her eviction. They even welcomed her by calling her in by her (in)famous laugh — even if it wasn't on purpose.

Christine joining the jury members was, as they all told us on Wednesday's live episode, Awkward — with a capital "A." No one got up from their chairs, no one even greeted her. It was so uncomfortable, and I kind of loved it, and so did the jury members as they all wanted Christine to walk through that door.

In other jury house news, it looked like the ex-houseguests got makeovers. Hayden's hair was the best it has ever been — I want to know who his colorist is. And Jocasta was Mama J at her finest! They all looked great, proving that the Big Brother house can take a toll on someone's image.

Speaking of looking great. Zach, whoa. Is there a full gym in that huge jury house? Zach might beat Beast Mode Cowboy with biggest muscles now that he's had a little R&R, and more time to buff up. And you know that will kill Beast Mode when he finds out he has more competition for being the beastliest of them all.

Now on to the star of the show — Donny. Donny may have been too nice to play Big Brother but he has found a little sass in the Big Brother jury house. When the jury asked Christine if she now has a thing for dinosaurs — ZING — Donny chimed in and asked if she had an attorney — ZING! ZING! Way to go Donny.

The jury quickly realized that there was one person that was the reason they were all in the jury house — Derrick. And while they could blame him for bringing their Big Brother game to an end, they also seemed impressed that he is "the head of the snake" as Donny put it. If Derrick makes it to the end, it will be interesting to see if the jury will vote for the best game player or the person who betrayed them the least. From the looks of it, it seems it could be the former.