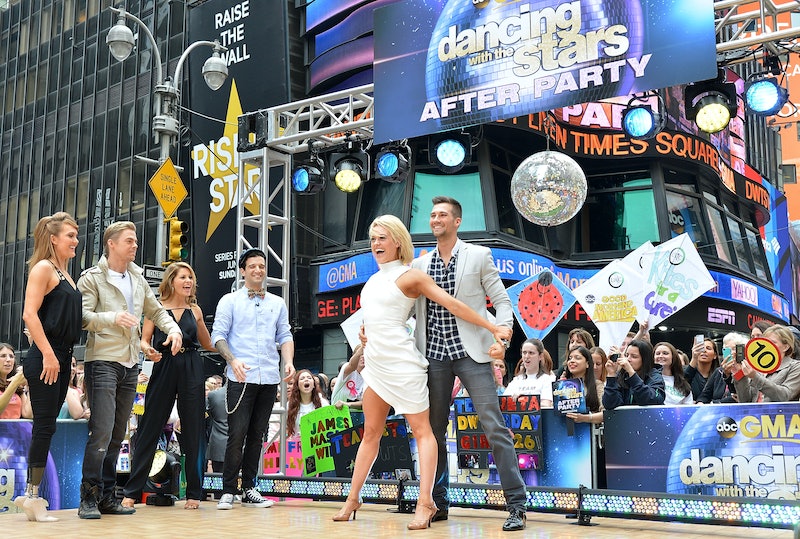 Dancing with the Stars is in for another impressive season, if the collection of stars they've gotten to sign on for Season 19 is any indication. The highlight of Season 18, above all else, was the sizzling chemistry and eventual win of Maksim Chmerkovskiy and Meryl Davis, but Season 19 already has its highlights in Carlton Banks, Aaron Samuels, and Mona Vanderwaal — oh, sorry. I mean, in the fact that Alfonso Ribeiro, Jonathan Bennett and Janel Parrish will be on DWTS this season. The first episode of the season won't come out until September 15, but in the meantime we're already getting spoilers about what we have to look forward to. According to JustJared, we even have potential spoilers for what the first dances of the DWTS season are going to be.

Sorry to disappoint, but Ribeiro isn't opening up with The Carlton Dance or anything set to "It's Not Unusual" — not unless they want to do a Jive-worthy cover of the Tom Jones song. Ironically, however, he, Parrish, and Bennett will all be dancing the Jive for their opening number, so it will be interesting to see three actors who were involved in such amazing pop cultural staples try to take three different approaches to the same dancing style. I'm already predicting that Ribeiro will come out on top, but, then again, we got to see a lot more of his dancing skills on The Fresh Prince of Bel-Air than we did of Parrish's on Pretty Little Liars or Bennett's in Mean Girls.

However, according to the spoilers, Parrish's Jive will be set to "Bang Bang" by Ariana Grande, Jessie J, and Nicki Minaj. From the soundtrack alone, that could push her over the edge into victory. Is anyone actually sick of "Bang Bang" yet or are we all still going through the cycle of listening to it all the time, then not at all, then all the time again? If the spoilers turn out to be true, then it's a particularly fitting choice for Parrish since her stint on Pretty Little Liars is a lot more current than Mean Girls or The Fresh Prince.

Check out the full list of possible dances and songs at PureDWTS.

More like this
Twitter Has Very Mixed Feelings About The New 'American Idol' Winner
By Jake Viswanath
Oops! The 'Stranger Things' Monopoly Game Has Spoilers For Season 4
By Alyssa Lapid
Kourtney & Travis Crashed His Daughter’s TikTok Live In Their 2nd Wedding Outfits
By Grace Wehniainen
Stormi Just Walked A Red Carpet With Mommy Kylie Jenner & Daddy Travis Scott
By Hugh McIntyre
Get Even More From Bustle — Sign Up For The Newsletter