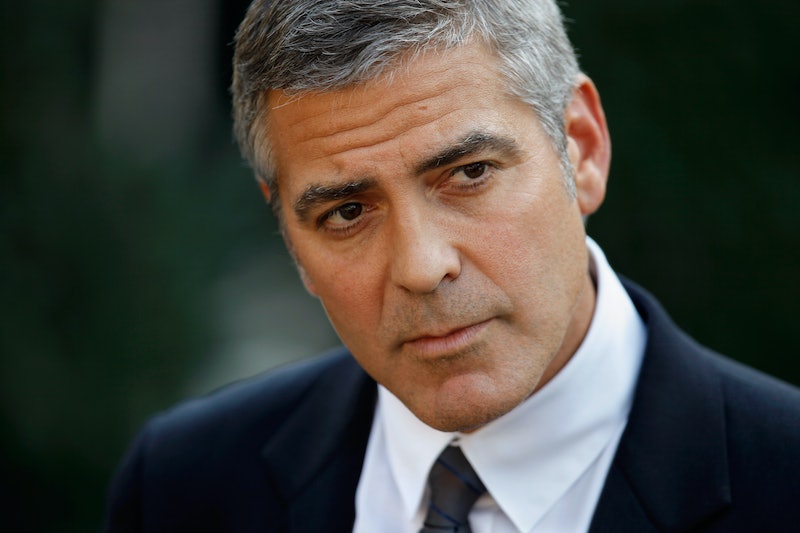 It appears that some rumors do have a hint of truth to them after all. Before we got a solid idea of what George Clooney and Amal Alamuddin's wedding plans were, there was a brief but popular theory that Clooney and Alamuddin were going to get married at Downton Abbey. The false story was padded with true details, such as Clooney calling in a favor from friend and Downton Abbey star Hugh Bonnevill to take Alamuddin on a private tour of the castle, but it just seemed a little weird that someone as private as Clooney would want such a Kim Kardashian and Kanye West-esque wedding. As it turns out, Clooney and Alamuddin may not be getting married at Downton Abbey, but Clooney will appear in Downton Abbey — sort of.

According to The Hollywood Reporter, Clooney is attached to a short Downtown Abbey film that will premiere during the holiday season on ITV in the United Kingdom. The film is being done for charity. Us Weekly adds that Clooney will be in a sketch scene for ITV's "Christmas charity fundraiser, Text Santa, which is set in Highclere Castle". Highclere Castle, as any Downton Abbey fan knows, is the setting for the insanely popular British television show.

Anyone hoping that Clooney's appearance in the film will be a tester for the potential of bringing him onto the show full time should probably give up on that dream. The short film set in Highclere is the full extent of Clooney's planned involvement with the show, at least for now, and he certainly won't be appearing in Season 5. Then again, considering the fact that Clooney has a friend in the main cast and is a big fan of the show, maybe we shouldn't rule anything out.

Clooney wouldn't be the first Hollywood star to make a guest appearance on the show, if we managed to sweet talk him into being on the show, so I'm keeping my fingers crossed. After all, once he and Alamuddin are married, it would certainly help their relationship for Clooney to spend some time working out of her home country, now wouldn't it? I clearly only have Clooney's best interests in mind here. Well, that and who doesn't want to see this face on television regularly again?

More like this
Laura Haddock’s 'Downton' Role Was Inspired By A Real Silent Film Star
By Sabah Hussain
How Ncuti Gatwa's 'Doctor Who' Casting Impacts His 'Sex Education' Future
By Nola Ojomu
Elizabeth Olsen’s ‘SNL’ Cameo Made Benedict Cumberbatch A Multiverse Believer
By Grace Wehniainen
What’s New On Netflix: The Return Of 'Bling Empire' & A Rebel Wilson Comedy
By Arya Roshanian
Get Even More From Bustle — Sign Up For The Newsletter