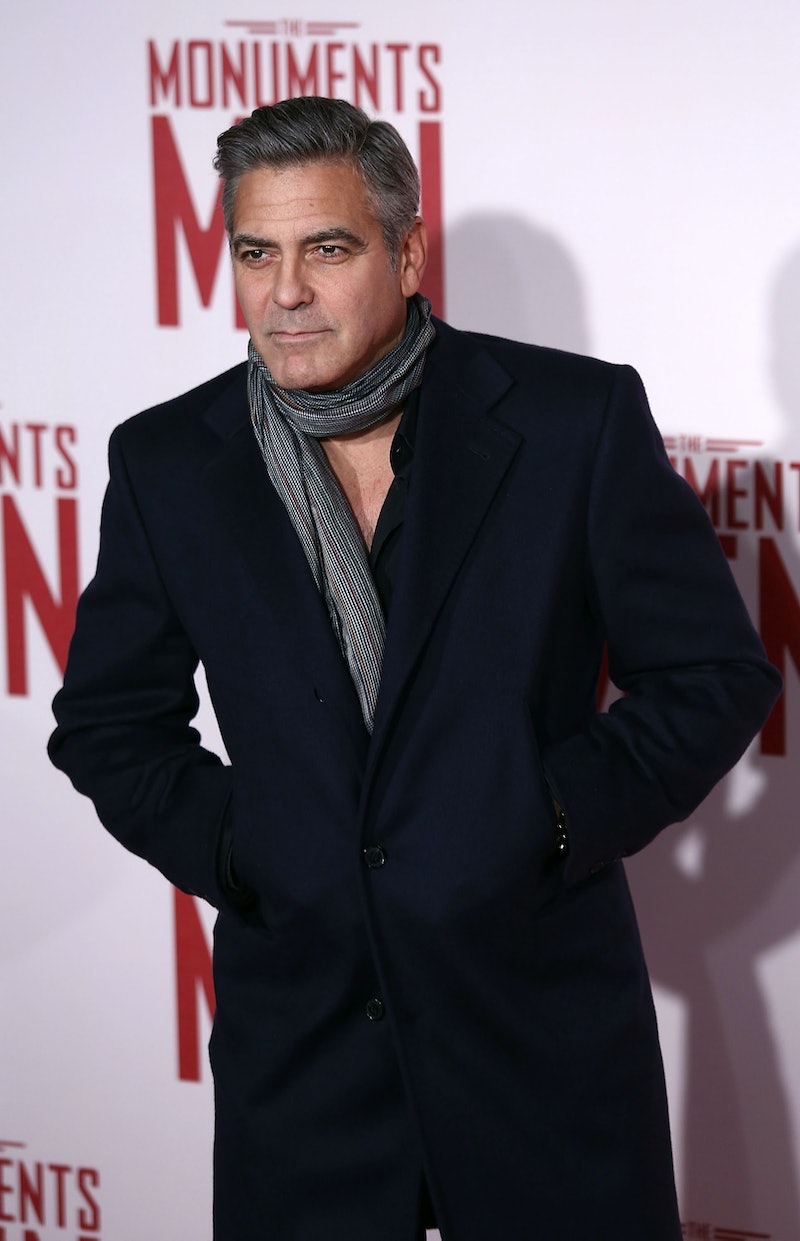 When news broke that George Clooney was engaged to Amal Alamuddin, it was a surprise to everyone. Clooney always said that he would never get married again and then suddenly, bam! there's a giant ring on his girlfriend's finger. Now that we know Clooney and Alamuddin are engaged, speculation has begun about the wedding's date and location. Reportedly, George Clooney is getting married at Downton Abbey. Um... what?! I would think, with Clooney being someone who didn't want to get married for so long, if anyone would be likely to have a long engagement, it would be him. But that's not a very fun theory, is it? Fortunately, some sources who spoke with the Daily Mail feel differently and think Clooney and Alamuddin are going to get their Downton Abbey on very soon.

According to the Daily Mail, the couple has "pretty much decided to walk down the aisle in September" (keep in mind, this has not been confirmed by Clooney or Alamuddin) and now they're looking for a venue. Reportedly, Clooney and Alamuddin visited Downton Abbey's Highclere Castle after Clooney called in a favor to his buddy and Downton cast member Hugh Bonneville. A source says, "When he saw his bride-to-be’s reaction to the spectacular Victorian castle, set on 1,000 acres of parkland, he began making some discrete inquires about having their wedding performed there. And he was told they would be most happy to accommodate them!" Oh! Well isn't that just so convenient!

While it might make sense for Clooney and Alamuddin to get married in England seeing as that's where Alamuddin lives and is from, the idea that someone who keeps his private life as private as Clooney would suddenly want an over-the-top wedding on the Downton Abbey set seems fishy. Plus, the sources who claim the story is true went as far as to compare this upcoming wedding to the Kimye nuptials. One insider said, "George loves the idea of marrying at the castle, because it’s a glamorous place he could secure. And the same way Kanye West and Kim’s wedding guests were given a private tour of The Palace of Versailles, a private tour of not only the castle and grounds, but of the famous Egyptian Antique Exhibition in the Castle cellars could be arranged."

I don't know about you, but I don't see the wedding of these two having much in common with Kimye's. If they really do end up getting married at the castle, it will come as even more of a surprise than if we find out they got secretly married at some tropical locale two weeks ago.

More like this
Here's How To Stream 'Downton Abbey: A New Era' & The New 'Downton' Channel
By Alice Broster and Sam Ramsden
Kendall Jenner & Devin Booker Reportedly Broke Up After 2 Years Of Dating
By Jordyn Tilchen
Why Sara Pascoe's Husband Is Familiar To Comedy Fans
By Alice Broster
Paapa Essiedu Likes To Keep His Relationship Pretty Private
By Maxine Harrison
Get Even More From Bustle — Sign Up For The Newsletter