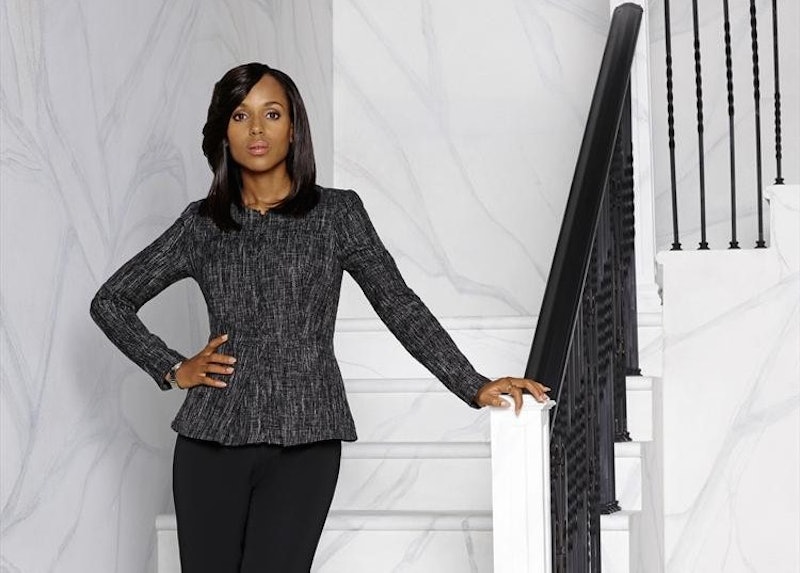 It's been a long summer, but we've finally made it! ABC's Scandal is about to return for Season 4 on Thursday, September 25, and the first promo for Scandal Season 4 came out earlier this week. The good news? It looks like Olivia Pope is getting some much needed R&R. After all, this is probably the only vacation Olivia's had in her entire career. The bad news? The promo gave us exactly zero hints as to what we can expect in the new season other than that. Are you serious right now, ABC? I waited all summer for this? I need to know where Olivia Pope will be when Season 4 premieres. Now.

Luckily, there are a few pieces of information that we're already privy to, and if you're worried Olivia's shedding her white hat for good, don't worry — showrunner Shonda Rhimes has already confirmed that's not the case to TVLine, and added that when Liv's back in town, "Everything is a pile of rubble." Um, duh?

Now that we know something will bring Olivia back, we still don't know what. And after everything that's transpired, I wouldn't be surprised if it took an earth shattering event to convince her to leave her tropical oasis with super sexy Jake Ballard... and I think our options are narrowed down to these three things:

This one seems pretty inevitable, considering that Harrison isn't returning for Season 4... and when has Shonda Rhimes ever turned down the opportunity to kill off a character (especially when the actor is found doing something terrible in real life)? Receiving word that one of her closest friends and Gladiators is dead (most likely at the hand of her father), Olivia will probably be jarred back into reality and realize that the only person capable of holding everything and everyone together is her. See what happens when you take a vacation, Olivia? People die.

Jake convinces her to do the right thing

Jake's a lot like Regina George — he's fabulous, but he's evil. Despite the fact that I haven't quite decided if he's good or bad just yet (he keeps making me change my mind, and I want to love him so much!), I think that, in certain situations, his moral compass would align for the good of those he cares about. His number one priority? Olivia, and for her ultimate happiness (and the good of everyone in DC, really), he knows that the right thing to do is for her to get back to work doing what she does best. If Jake can put together convincing enough of an argument, I could totally see Olivia seeing the light because of it.

Fitz asks her to come back

No matter how she might feel about Jake, I think Fitz is still holding the prime spot in Olivia's heart. And now that he's dealing with the sudden death of his son, Jerry — and all because of Olivia's dad — he's going to need her. And I'm not sure Olivia would be able to ignore him if he asked her to come back. Fitz doesn't really ever allow himself to be ignored.

More like this
Oops! The 'Stranger Things' Monopoly Game Has Spoilers For Season 4
By Alyssa Lapid
This 'Anatomy Of A Scandal' Star Has Joined The 'Bridgerton' Family
By Sam Ramsden
'Gentleman Jack’s Cast & Crew Are Keen On Season 3, Too
By Frances Stewart
The 'It's A Sin' Creator Revealed A Massive Detail That Didn't Make The Final Cut
By El Hunt
Get Even More From Bustle — Sign Up For The Newsletter