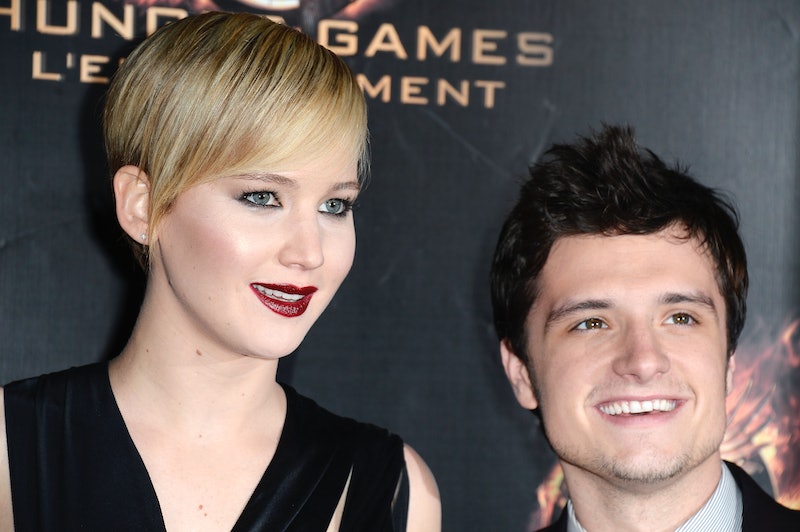 In a very sweet, Peeta-like manner, Mockingjay's Josh Hutcherson defended co-star Jennifer Lawrence in the wake of her nude photos being stolen and leaked. Hutcherson took issue with the crime intself, and the people who shamed J. Law for it. “It’s f****** horrible," he told The Daily Beast. "I haven’t spoken to her since it happened, but as far as the public, Twitter, and media have reacted, it’s awful." The biggest problem Hutcherson had with the way everyone responded was how so many people blamed Lawrence. Countless accusations have said that if she didn't want this kind of stuff to get out, she shouldn't have signed up for the public life. But Hutcherson has a different take on things.

We act because it’s what we want to do. I’ve acted since I was 9 years old because it’s my job, it’s what I’m good at, and it’s what I love to do. I don’t want attention. I don’t want to have my private life looked into or have people think they deserve to know about my private life. And then people say, "Well, then you shouldn’t have become an actor." F*** that. I didn’t choose all that. I chose to be an actor. I was 9 years old! Do you think a 9-year-old is thinking about public scandal? I wanted to make movies.

It's not surprising that Hutcherson defended J. Law. They may not be romantically-linked in real life, but the two actors are great friends off-screen and have been standing up for each other for years. In 2011, when Hutcherson came under fire from Hunger Games fans who weren't happy with his casting, J. Law stepped in to defend Hutcherson's acting.

Josh is so charming. He’s so charming! And when you read in the books about Peeta being able to manipulate anybody ... [Josh] embodies all of it and brings it all to Peeta. So when you meet him he’s got all of these great qualities and every single one of them come across in every line he says out loud as Peeta.

And three years later, the pair still has each other's backs, so anybody still wanting to blame Lawrence for the nude photo leak better watch out for Hutcherson. You do not defame J. Law and get away with it.