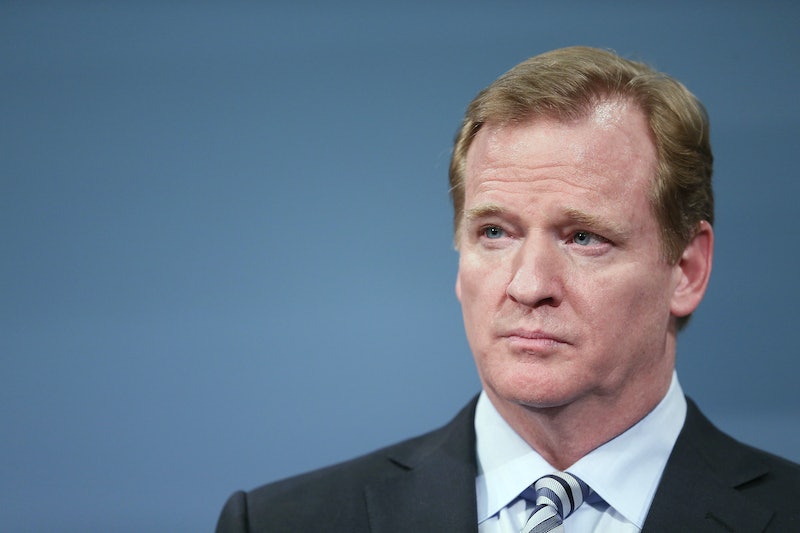 In the last few days, the Ray Rice domestic violence case has shed some sobering light on the NFL. After additional footage revealed the extent of Rice's violence toward his then-fiancée Janay, the league's two-game suspension slap on the wrist felt like a joke. And then an Associated Press report revealed that the NFL has had a copy of the tape since April 9. Through it all, NFL Commissioner Roger Goodell has remained relatively unfazed, but maybe it's time for him to resign — or be pushed.

On one side, sports pundits and women's advocacy groups are aggressively applying the pressure for Goodell to step down. Maury Brown, writing for Forbes.com, pointed out how Goodell's actions have been based on "public relations damage control" and not driven by doing the right thing. In fact, he's repeatedly made the wrong decision and then has had to backpedal, first defending the two-game suspension decision and then admitting that he "didn't get this right."

In response to the NFL's poor handling of the case, sports commentator Keith Olbermann recorded an impassioned segment on his ESPN show Olbermann calling the whole thing a "cover-up." He then demanded that every individual involved — including Ravens officials, Atlantic City prosecutors, Rice, and Goodell — resign.

Brown also points out in his piece that Goodell didn't seem to waiver when suspending a Cleveland Browns player for a whole year over marijuana use, calling into question the arbitrariness of his suspension lengths. It's also a reflection of the NFL's priorities, which, judging by Goodell's actions, don't seem to place domestic violence very high on the list.

That's what women's advocacy group National Organization For Women, who is also calling for Goodell to resign, has pointed out.

The NFL has lost its way. It doesn't have a Ray Rice problem; it has a violence against women problem.

The group also mentioned Goodell's silence over accusations that Cowboys owner Jerry Jones had sexually assaulted a woman. So, clearly the Ray Rice case may only be the tip of the iceberg when it comes to sexual assault and domestic violence in the NFL. In calling for Goodell to resign, NOW is urging for an independent investigator to take his place and "gather factual data about domestic violence, dating violence, sexual assault and stalking within the NFL community."

On Wednesday night, Goodell did just that. He asked former FBI director Robert Mueller to lead an independent investigation into the NFL's handling of the Ray Rice case. Whether or not that investigation will look further into Goodell's contradictory claims that the league never saw the full elevator footage despite the AP report remains unclear.

So how is Goodell responding to all this pressure? He's not budging. According to the Washington Post reporter Mark Maske, Goodell is "adamant" about staying put.

One source close to the NFL told Maske "[resigning is] not a consideration" while another said that there was "no chance" of it happening.

And he has several people in his camp standing by him through the controversy, including many franchise owners like New England Patriots owner Robert Kraft and New York Giants co-owner John Mara, who said in a statement on Wednesday:

Goodell shrugged off his critics during an interview on CBS This Morning, saying, "I'm used to that. Every day I have to earn my stripes."Images: Getty Images (3)