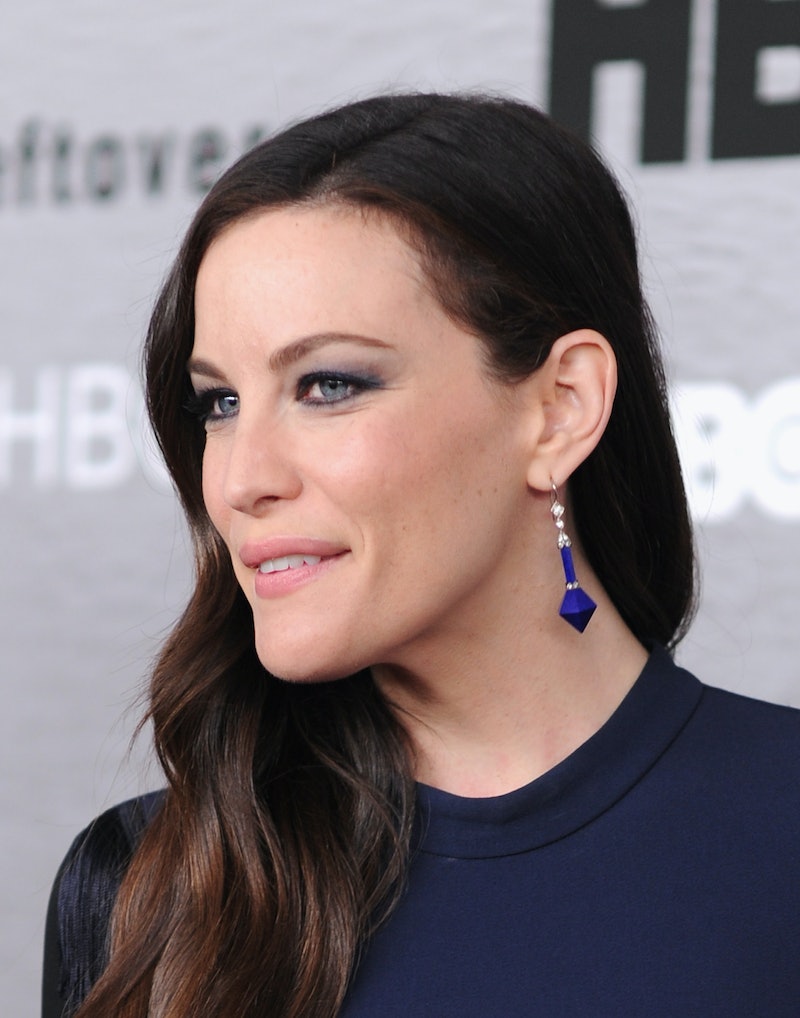 According to E! Online, several sources, none of which are her reps, have confirmed that Liv Tyler is pregnant with her second child. The site even posted a photo of The Lord of the Rings actress walking around New York City, sporting black overall shorts and holding a dark jacket against her stomach and chest because she might be showing. All of this speculation follows recent talk that Tyler has a new guy in her life, Dave Garder. These crazy kids were seen around London and vacationing in Spain in August, canoodling and PDA-ing to their hearts' content. Also in August, a source told E! that Tyler and Gardner had been a twosome for three months, after being set up by their mutual friend Kate Moss, and word on the street is that Tyler's been pregnant since their trip to Spain. While we don't know if Tyler is expecting for sure, it's at least clear that she's hanging out with a new dude, so who is Dave Gardner? Let's find out!

Possibly to the point where he can call him "Davey." Well, maybe not exactly that, but who knows! Perhaps they call each other "Dave and Davey" as they do their secret handshake. Gardner co-starred in Beckham’s documentary

Gardner's one of the founders of Elite Sports, a sports agency which represents none other than his BFF David Beckham.

He Has a Son

Like, Tyler, Gardner already has a child. Gardner has a 7-year-old son, Grey, from his previous marriage to Davinia Taylor, English actress and socialite. Yeah, his son's name is Grey Gardner which is a good alliteration, but strikes too close to the film title Grey Gardens for my taste. As for Liv, she has a 9-year-old son named Milo William Langdon from her previous marriage to Spacehog band member Royston Langdon.

He Was Once Linked to Rita Ora

Ora and Gardner dated in April 2013, according to the Daily Mail. Reportedly, the sports agent and the songstress met at a party at the end of 2012, and at the time Ora told friends that she could really fall for him. She later began dating Scottish DJ Calvin Harris.

He's Madly in Love with Liv

According to a source who spoke with the Daily Mail, "This is the real deal. Dave and Liv are madly in love." And, reportedly, are already expecting a baby after four months together. Baby on the way or not, congrats to the happy couple! It sounds like things are going well!

More like this
Hilary Duff Spills The Tea On Why Disney+ Canceled The 'Lizzie McGuire' Reboot
By Jake Viswanath
Harry Styles Addresses The Theory That His New Song "Daylight" Is About Taylor Swift
By Jake Viswanath
Joe Alwyn Reacts To Taylor Swift Earning An NYU Doctorate In A Rare Interview
By Jake Viswanath and Nicole Pomarico
Is Megan Fox Pregnant? MGK Gave A Shout-Out To Their “Unborn Child” Onstage
By Hugh McIntyre
Get Even More From Bustle — Sign Up For The Newsletter