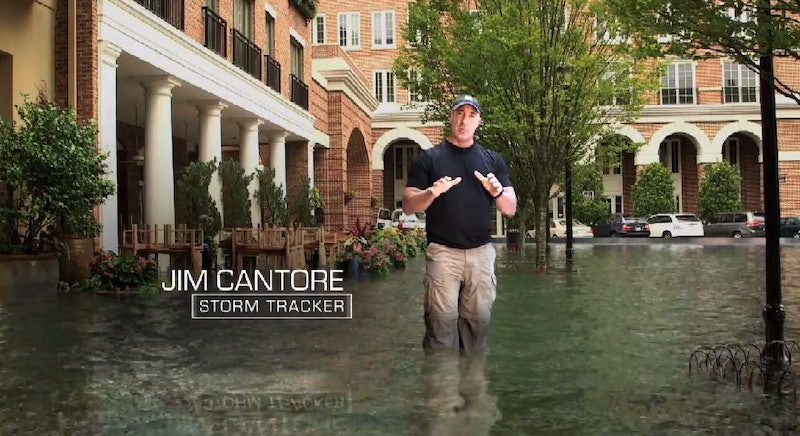 If you thought that haunted IKEA was scary, just wait — this little tidbit is about to scare the pants off you (although possibly for different reasons). This video from the World Meteorologist Organization imagines what our weather reports in the future will look like… and it’s absolutely terrifying. Seriously, you guys. Scariest thing you’ll see all day. I guarantee it.

In the world the video imagines, hurricanes that remain 400 miles offshore still have enough force to put Miami underwater. It’s in the upper 90s in Chicago, in the evening, even at the end of September. A “megadrought” has been going on the southwest for 50 years, causing towns to go literally dry. The Summer Olympics are scheduled to take place in Alaska. And the Arctic Circle is a major vacation destination. Uh… yikes. Here, take a look:

True, it’s kind of a shock tactic — but that doesn’t mean that it’s totally without merit. As Andrew Freedman at Mashable notes, “While the portrayal of Miami might seem far-fetched, it’s not far off from what studies show.” Research by Climate Central — the folks who brought us that interactive showing how summers in the future will compare with them now — shows that a 3.4 foot rise in sea level is likely in Miami by 2100; this means that there’s a “17 percent cumulative risk of at least one floor exceeding three feet by 2030, a nearly 50 percent risk by 2050, and a 100 percent risk by the end of the century.” If we keep going at the rate we’re currently at, we’re going to be in bad shape.

The U.N. Climate Summit will focus on taking action and creating solutions to reduce emissions and strengthen resilience. To find out more, visit the Climate Summit’s official website.

More like this
How To See The Lunar Eclipse On May 15-16, 2022
By Kaitlyn Wylde
25 Quotes About Love To Share During Pride Month 2022
By Madeleine Aggeler and Emma Garza
The 6 Best Air Conditioner Alternatives
By Vanessa Spilios
Photos Of Boris Johnson Drinking At A Downing Street Lockdown Party Have Surfaced
By Bustle UK
Get Even More From Bustle — Sign Up For The Newsletter