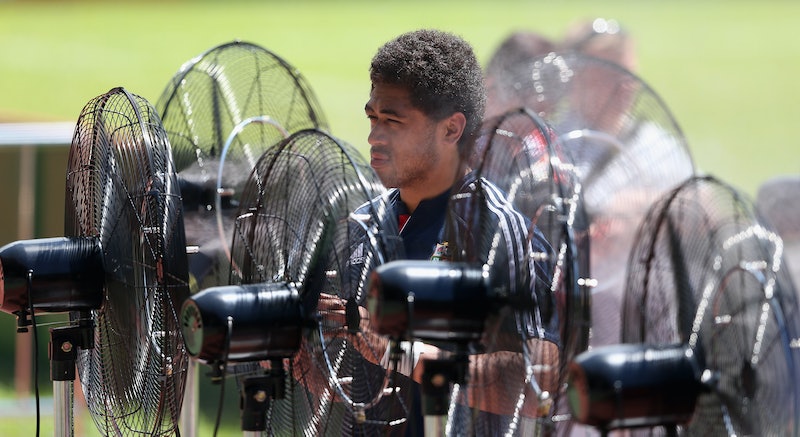 This summer has been hot so far. Really, really hot. But if you think this is as bad as it gets, just wait til you see what’s in store for us in the future. Climate Central has done a little number-crunching and a little fancy coding, and the results show that by the end of the century, summers are going to be a heck of a lot worse in every city in the U.S.

We already know that summers now are quite a few degrees warmer than they were in, say, the 1970s. So based on the data we have on summer temperatures for 1,001 U.S. cities from 1986 to 2005 and our current emissions trends, Climate Central calculated projected temperatures for those same cities for the years 2081 through 2099. Then they put it all into an interactive that not only tells you what the temperature will be in all those places by 2100, but also what an analogous location by today’s current temperatures might be. The short version? Basically, everywhere in the future is going to feel like a place in the present that is significantly further south; most cities will warm up by seven to 10 degrees Fahrenheit, although some will rise as much as 12 degrees.

For example, New York in 2100 will rise nine degrees, making it feel like Lehigh Acres, Florida:

And Los Angeles, too, will start to feel like Florida, with its seven degree rise bringing it closer to Fountainbleau’s current climate:

Portland will rise a full 10 degrees, likening it to today’s southern California:

And Austin will bump up nine degrees, putting it on par with Gilbert, Arizona—which, by the by, is currently known as one of the hottest cities in the country:

True, a lot of us probably won’t be around by 2100 (like me, for example, unless I miraculously manage to live to the ripe old age of 115)—but that doesn’t mean it’s not our problem. The reason we’re in such an awful position right now is due to previous generations either subscribing to the “it’s not my problem” philosophy, or just being flat-out ignorant of the damage they were causing. The United States Environmental Protection Agency has a whole lot of resources about what you can do at least to slow climate change, if not stop it; there are tips and tricks to employ everywhere from your home to the office, so if you’re looking for a place to start, head on over there. Even doing something as simple as swapping in energy-efficient light bulbs in your five most-used lamps can do a whole lot of good.

Curious about where your home city will be at the end of the century? Plug it in here, and see what you get:

More like this
13 Summer Solstice Quotes To Celebrate The Longest Day Of The Year
By Sadie Trombetta
The Summer Solstice Spiritual Meaning, Explained
By Jessica Booth and Brittany Beringer
Chic Jean Shorts Outfits That’ll Make Your Old Denim Feel Brand New
By Dominique Norman
Starbucks Released New Menu Items For The Summer
By Emma Garza
Get Even More From Bustle — Sign Up For The Newsletter