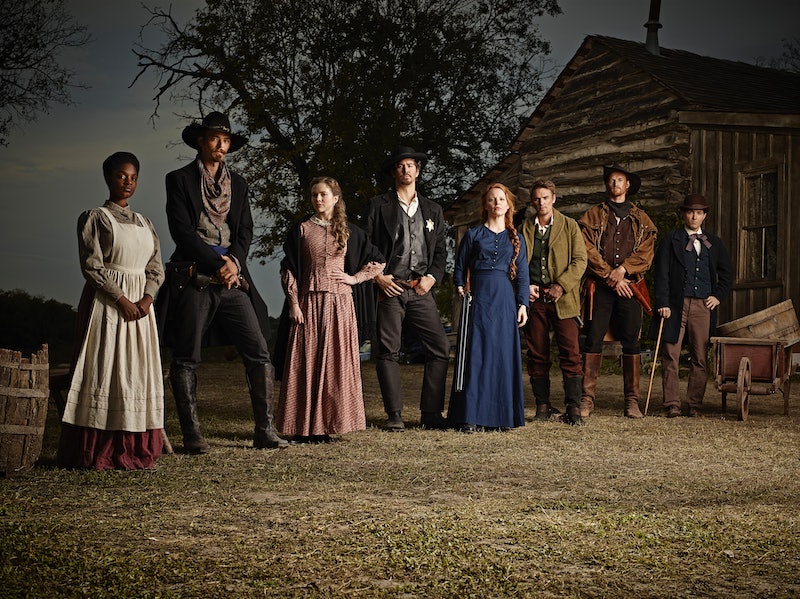 In its Civil War drama Deliverance Creek , Lifetime will whisk viewers back to the 1860s for just two hours, only to leave us hanging on what the future holds for all of its characters. In a conference call with reporters, Nicholas Sparks, who served as executive producer, and the project's leading lady, Lauren Ambrose, gush about how thrilled they were to bring this period drama to the silver screen. So will we see Belle Barlowe again? "I’m hopeful, sooner rather than later. We did that purposefully with the script," Sparks explains of the possibility of Deliverance Creek getting picked up, before detailing that the story has enough avenues for a relatively long run.

And of course, for a man who seems to not have the phrase "writer's block" in his vocabulary, Sparks is already thinking about where the story can go after the Lifetime television "event" airs on Sept. 13 at 8 p.m. "We’re pretty clear on where Belle’s character goes all the way through Season 4 and it's filled with a lot of twists and turns that people will not likely expect."

But what do the stars of the period piece have to say? "I have a lot of positive expectations of where this show is going to go," Christopher Backus — who plays Jasper, a loose interpretation of Jesse James — tells me in a separate interview. "The historical research of it all has left open these amazing avenues that we can explore."

"It will be interesting to see [some characters] transition into full time outlaws," Backus says, hinting that he and Deliverance Creek showrunner Melissa Carter have already talked about the direction that Jasper and his fellow outlaws would follow, similar to the path of Jesse James.

Lauren Ambrose, who plays Belle Barlowe, isn't ready to give up her character just yet. "I really hope that we get the chance to go back to Texas and make more," she says. "I love playing my character, but I also find the other characters — are so full and then there is the whole the small town living aspect of it. And I can’t wait to find out what happens and I really hope we get to make more."

While it sounds like the cast and crew of the show can't wait to get back on their saddles — literally and figuratively — the future of Deliverance Creek does rest in the hands of the television viewers. Will we get to see more? Let's hope so. Sparks has never disappointed us before, so if he has a story to tell, I think we better listen.