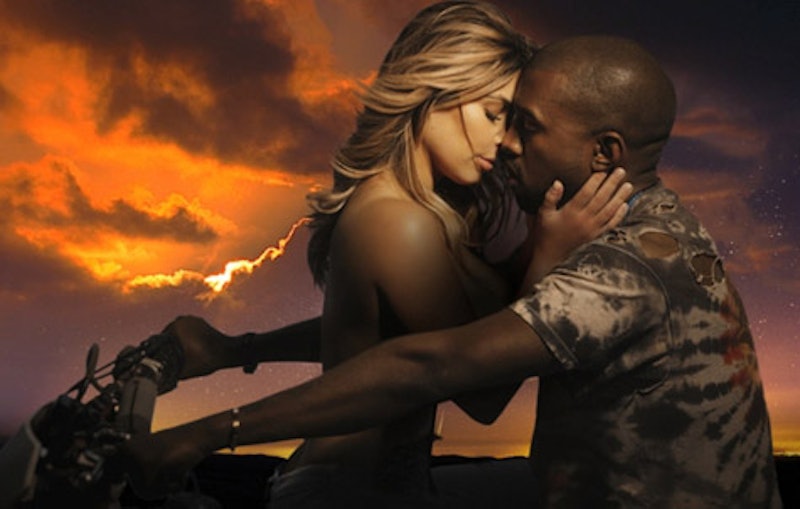 Hey, look at that, Kanye West and Kim Kardashian have a new video! Let me rephrase, Kanye and Kim have a new music video that was just released Monday on Ellen. The clip for "Bound 2" is five minutes of stock-video landscapes with the celeb couple making love and looking really bored. Kim is naked, Kanye rides a motorcycle, and we yearn for the days when choosing a new desktop screensaver was a huge deal. There were plenty of majestic horses, yet sadly no unicorns. Sigh.

The two have been keeping up with their usual media blitz/saturation recently with the whole proposal video law suit, Kanye's surprise speech at Harvard's design school, releasing new North West baby photos, and well, ah cripes, just search "Kanye and Kim" in your browser of choice and you'll see that they're everywhere, all of the damn time. They leave very little for the public to wonder. However, there were a few mysteries we couldn't quite solve after watching "Bound 2." Questions that were perhaps even more puzzling than Kanye's recent affinity for bejeweled masks on his Yeezus tour.

Here are the things that "Bound 2" have left us wanting to know:

Why was it debuted on Ellen?

Don't get me wrong here, Ellen is a great show and is leagues above the rest of daytime television. It just seems a little odd that Kanye released his new, somewhat explicit video to a demographic that's uh, probably not the biggest fans of Kanye. Weird choice, but we'll go with it, I guess.

Seriously, what's with all the landscapes?

Time lapse, haws, starry skies, and lonely trees. Kanye probably has a long-winded explanation. Maybe not. Maybe he can just do whatever the hell he wants because he's Kanye West. Either way, it sure does look a bit like this Backstreet Boys video.

There is a single white horse, WHAT DOES IT MEAN?

C'mon, it means something. Right?

Did Kanye just come back from Coachella?

WHERE ARE KIM'S NIPPLES?

The photoshop job must have cost more than the motorcyle and green screens combined. Kim's smoothed out bust is totally creepy.

Haven't we seen this before?

Seriously, I feel like I've seen this image of Kanye in front of Kim showing signs of fornication. [Subquestion: Are we supposed to feel like we're in an opening sequence of Breaking Bad?]

Oh right, there it is.

It's the end of the video and Kim and Kanye appear to be flying into the sky on his motorcycle...

Want to see it in its full strange glory?

Of course you do.