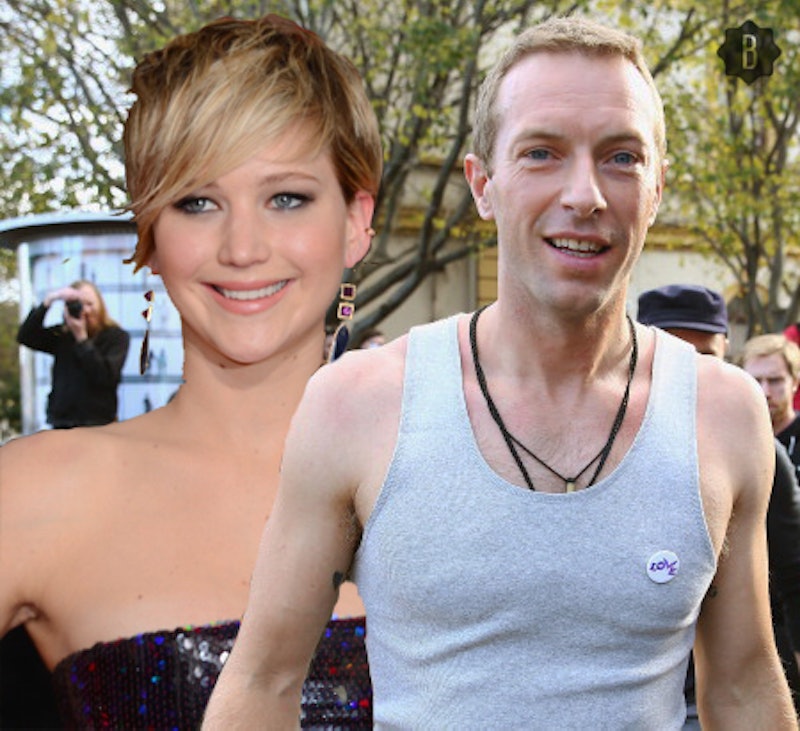 I have to say, the paparazzi have really been disappointing me this year. I mean, speaking of people whose whole job involves invading the privacy of the rich and famous for money, they're really dropping the ball. Angelina Jolie and Brad Pitt got married and kept it a secret for nearly a week. Neil Patrick Harris and David Burtka got married in a similarly secret ceremony. And now you're telling me that Jennifer Lawrence and Chris Martin have gone on another date and there is still no photographic evidence that the two of them have ever been anywhere near each other? I know that invading Lawrence's photographic privacy would be an awful thing to do given current circumstances, but it has been almost a month since rumors began flying about Martin and Lawrence and there hasn't even been so much as a blurry camera shot!

As someone whose job also requires her to invade the privacy of the rich and famous for money, I consider this a travesty, one even worse than the news that Lawrence and Nicholas Hoult had broken up for the second time. Lawrence is one of those celebrities with a personality that makes you feel as though she's your best friend and as her faux best friend I want her to be happy. However, I also want to see pictures of her being happy, especially if it's with someone as bizarre as Martin. This is one of those couplings that literally has to be seen to be believed.

So when are they going to make it official with a public appearance? At this point, I can only guess. I'm imagining, for example, Lawrence turning up for a Coldplay concert and allowing herself to be photographed with Martin at the after party, all smiles from how happy she is.

Or maybe Martin will show up to support her at one of the press conferences for her many, many movies. Even though he'd been trying to stay backstage and out of sight, a journalist who loves me will beg him to come onstage and take a seat next to Lawrence so the camera flashes can go off and I can go through all the pictures the next morning.

Or, hey, maybe Martin could be starring in the movie alongside her in his acting debut. I'm not picky. We'd get even more pictures then.

Of course, it wouldn't have to be all business. I would love just to see some snaps of the pair of them hanging out. They've gone on a romantic date to a vineyard, they've had pizza dates, and now they've been to a Beverly Hills restaurant. (Yes, they somehow managed to be out on a romantic date in BEVERLY HILLS, CALIFORNIA without anyone taking a picture of them. How is that possible?) It's about time they just take a stroll through the park.

Someone, anyone, just take a picture of Lawrence and Martin, even if it's just from the back, even if it's just from your phone, even if you're not sure it's really them. I still find it hard to wrap my mind around this conscious coupling without photographic evidence, but, then again, skepticism is in my blood. And as long as Martin is making Lawrence happy, and vice versa, then I guess I don't have much reason to complain.