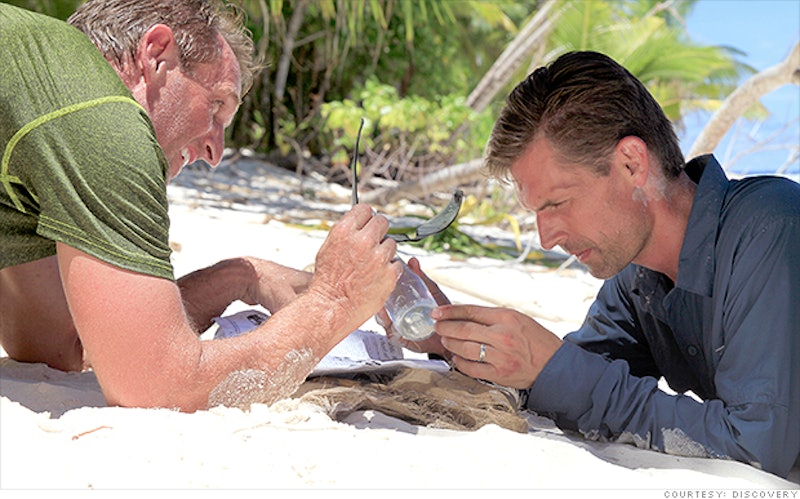 The gridlock in Congress was just taken to a whole new level. Unable to work out their ideological differences in the Senate chamber, Senators Jeff Flake and Martin Heinrich went on Rival Survival, a new Discovery Channel Survivor-esque show that pits two adversaries against each other on a remote island. There's no shelter, no fresh water, no Barack Obama — just two senators who can't agree on the Affordable Care Act, same-sex marriage, abortion or government spending. But don't worry, there's always a trip to a deserted island (and immigration reform) to find some common ground.

Using only these limited resources and their wits, the pair must work together as they attempt to spear fish, build shelter and find enough water to survive for one week. There is no natural source for fresh water on Eru, and what lives in the ocean will be their major food source. This unusual pairing will leave behind the daily life of congressional staff, senate hearings and committee meetings to navigate the rigors of surviving on an isolated island with no contact with the outside world to call upon for help.

Will the senators truly learn how to put their party-line differences aside to survive the next election — I mean, an island surrounded by shark-infested waters? Well, we'll just have to turn into not only the Discovery Channel, but also CSPAN to see whether or not spearing fish together is the way to solve Congressional gridlock.

If you're now looking forward to an all-women edition of Rival Survivor featuring, say, Senators Elizabeth Warren and Lisa Murkowski, don't bother: the 20 women senators have bipartisanship all figured out, and they didn't have to leave Capitol Hill to do it. Really, all they had to do was be nice to each other and make fun of Strom Thurmond over a cocktail or two.

The 20 women senators have been known for their accord, and continually serve as a shining example of bipartisanship in the increasingly polarized halls of Congress. They're determined, but compromising. Also, they really don't care what men think about birth control (OK, well, except for Republican Sen. Kelly Ayotte).

But if they've already shown so much accord on Capitol Hill, what would the women senators do if they had their own deserted island? Would they form their own feminist utopia, ruled not by an institutional hierarchy or Valerie Solanas, but a matriarchal democracy?

Here's all the things women senators could accomplish on their own island:

Plus, let's just admit that in any Rival Survival situation — man or woman — Sen. Barbara Mikulski would win hands down.

More like this
Kim Kardashian Remembers Her Last Words To Death Row Victim Brandon Bernard
By Jake Viswanath
Michigan’s Governor Is “Going To Fight Like Hell” To Protect Abortion Access
By Andrea Zelinski
Cardi B Explains To David Letterman Why She Uses Her Star Power For Politics
By Jake Viswanath
What Is Barack Obama’s Net Worth? He Makes *Way* More Now As An Ex-President
By Hugh McIntyre
Get Even More From Bustle — Sign Up For The Newsletter