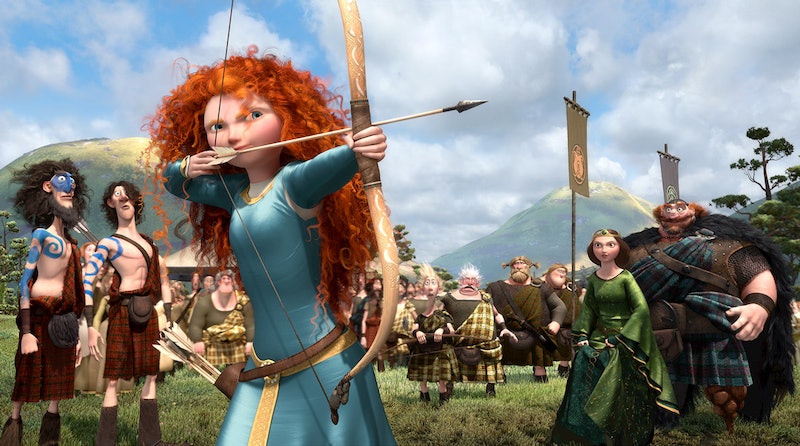 If you're like most of the world, you grew up on Disney movies. Hell, we're all still growing up on Disney movies — or have you not seen Frozen one too many times? Essentially, Disney taught us about half of our life lessons, some we later had to critically examine and disregard, and probably makes up some of the earliest movies some of us can remember watching. However, as we look back upon our idyllic childhoods and the Disney movies that meant so much to us, we often find a lot of problems. Much like rewatching a Disney movie and realizing how creepy it is, rewatching a Disney movie can also uncover racist and misogynist elements. So when Glamour unveiled the reason Disney movies have so many missing mothers, I wasn't surprised. Or, well, I was, but for a different reason.

According to Don Hahn, the executive producer of Maleficent, the reason that there are so many missing and absentee parents in fiction is because, quite simply, it's a storytelling device forcing and enabling the main character to step into the position of control and responsibility. However, he went on to say that the reason for missing mothers in particular was because Walt Disney had bought his parents a new house with the money he made from the first few Disney movies and a furnace leak in the new house ended up killing his mother. The thing is, Walt Disney himself passed away in 1966... and Disney movies still have a missing mother problem.

Take, for example, the Disney princess line up. Of the fourteen princesses in the line-up, Anna and Elsa included, only five of them had mothers that were actually seen during the film and only three of them had mothers who actually spoke. In fact, the only recent Disney movies to focus on a strong mother-daughter relationships were Brave, Maleficent, and Tangled. I’m not sure the latter two should really count since Maleficent was not Aurora’s mother and Mother Gothel was emotionally abusive to Rapunzel in addition to not being her mother. The fact that I need to grasp at straws is enough of a clue that things need to change.

When Brave was released in 2012, it came as a revelation to me. Like most girls, when I became a teenager I went through a phase where I hated my mother a lot. Not really, but I certainly thought so. I was trying to assert my independence for the first time and she was clinging to my childhood and we butted heads a lot. I didn't realize that I have never seen that experience reflected back to me in the Disney movies I used to watch religiously until I watched Brave with my sister and identified with Merida on an almost spiritual level.

I can't shoot an arrow and I'd love to get married, but her conflict with her mother and how they slowly — magically — came to understand each other and repair their bond spoke to me like nothing has before. And that's missing from the lives of most children watching Disney movies today. In Disney movies, the mother is either missing, or voiceless, or dies along with the father, or is evil. It's so rare that you have a strong bond between mother and daughter, one that says I might not always like you but I will always love you.

And it's not like Disney can't do movies about strong family ties: see Brave and Frozen for two different spins on that same narrative. All I'm saying is that Walt Disney's understandable mother complex might have kept the maternal narrative from getting any spotlight in Disney movies of the past, but it's 2014. There is no longer an excuse not to have more Disney characters raised by single mothers, like Tiana from Princess and the Frog or like Lilo in Lilo & Stitch if Nani counts; we have countless Disney characters raised by single fathers, after all.

Mothers get a bum rap in fairy tales and in Disney movies, but I think we're quickly moving beyond that time and into a brighter future where the missing mother trend might be done for good. I understand that the laws of storytelling require the parents to be indisposed so the children can take center stage, but it's about time we have more movies having them kidnapped or in danger, cursed or lost, or both deceased from the start and less movies that killed off the mother in the backstory and never bring her up except in one throwaway line to remind you that she meant something.

It's time that Disney weeds the missing mother trend out of their stories and start telling more progressive and more inventive tales, like Frozen, like Brave, and like Maleficent. I'm not saying I wouldn't have still had a rebellious teenage phase, but I might have understood where my mother was coming from a lot more if a movie like Brave had been around in the '90s.