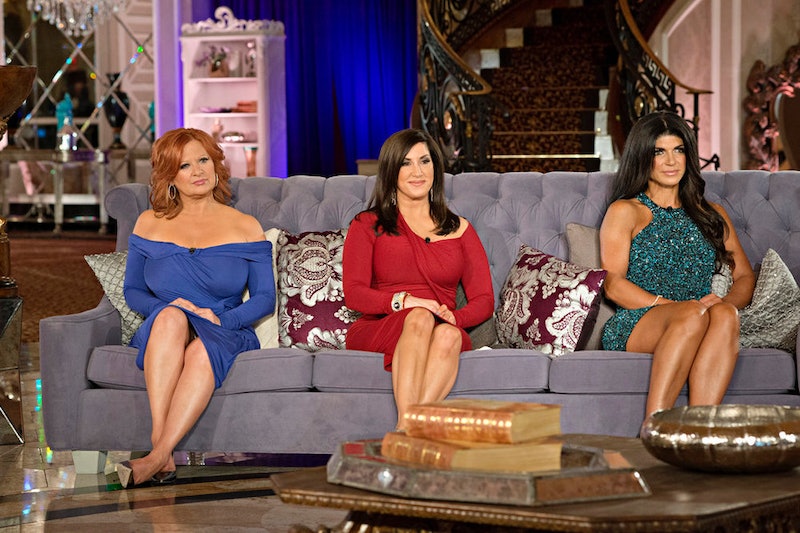 The first half of Real Housewives of New Jersey Season 6 introduced new ladies Teresa Aprea, Nicole, and Amber, shifting focus from the Teresa Giudice/Melissa/Jacqueline familial conflicts. And while it's been nice to see a different side to the show instead of the same old arguments between Teresa and Melissa brought up again and again, what's always set New Jersey apart from the other Housewives series is the idea that these people are truly stuck with one another because they're so tightly knit, which made the idea of Jaqueline Laurita rejoining RHONJ on Sept. 21 surprisingly exciting.

Since Jacqueline and Teresa haven't seen one another between seasons, it means that they don't hear about one another's husbands and kids, and weren't there for each other during their respective legal scandals. It means that Dina, always Tre's closest friend, gets caught between her sister-in-law and the friend she loves like a sister. It's messy and sad and the stakes are surprisingly high for a show that's usually about whether or not a text message was "mean" or not.

Considering that both the Laurita and the Giudice families are going through some tough times at the moment, Jacqueline doesn't seem prepared to resume fighting with Teresa. That's not to say they seem particularly close, either — they may get into it again as the season progresses — but for the moment they aren't exchanging passive-agressive blows via Bravo blogs or screaming at one another on television, which is a step in the right direction.

And now that the season is done filming, Jacqueline definitely still seems closest with sister-in-law Caroline Manzo, since the two are not only friends and family, but also business partners — the Manzos' BLK water gives a percentage of its profits to Jacqueline's autism research charity. But Jacqueline has also been seen getting to know the other ladies on the cast, spotted with Nicole, Teresa Aprea, and Melissa at an event just a few days ago. And she makes time to hang with fellow friend-of-the-Housewives Kathy Wakile in the Season 6 midseason trailer.

She also tweeted at Jim Marchese, who seems intent on being more active within the cast than his wife. Jacqueline shrugged off any criticisms for Tweeting with both the twins and the Marcheses.

Teresa' social media is strictly professional — work events, immediate family, and food. She doesn't spare many words for her Housewives costars, even those who are close to her, so it's hard to get a handle on whether she and Jac have managed to bury the hatchet or are still walking on eggshells around one another. It seems like for now, while Jacqueline and Teresa aren't the best of friends, Jacqueline's back with the intention of getting along with everyone, even if that means putting the past behind her. We'll see how much of a part she has to play in Season 6, but since she's back with the rest of the crew, hopefully it's a good one.