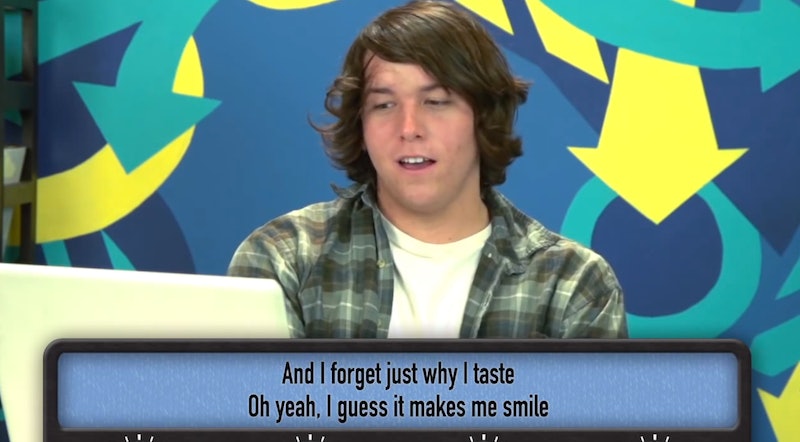 In a new installment of "Teens React ," a group o' teens is presented with the lyrics to Nirvana’s 1991 hit “Smells Like Teen Spirit," aka One Of The Greatest Rock Songs Of All Time. To up the ante, the lyrics are presented sans name of song or artist. The teens are asked to react to the lyrics. And react to the lyrics is exactly what they do. A few of the teens recognize the lyrics (shout-out to those teens), whereas the rest don't have a clue as to what they are reading. MOSQUITO, er, MADNESS ENSUES.

Yeah, I laughed while watching the video (I CACKLED at “Nirvana. A lot of people wear those shirts."), but I wasn’t laughing at the teens. I was laughing with the teens. (OK, maybe I laughed at them a little. Oh, youths .) Because the "Smells Like Teen Spirit" lyrics are a mindfuck. I mean, I grew up with this song and my analysis begins and ends at “It’s about teen angst... I think?" (What I do know: "Load up on guns, bring your friends" has nothing to do with a video game franchise that made its debut in 2003.)

If the "React" series asked a bunch of 20- and 30-year-olds to break down the meaning of each “Smells Like Teen Spirit" line, I’d be willing to wager that the results would also be pretty funny. Because the lyrics are a mindfuck.

Yeah, some of the teens' responses had me like "LOLOL WUT?" But there were some that made me shrug and say "LOL fair." Here are the reactions I can't get enough of:

LYRIC: Oh no, I know a dirty word

TEEN'S REACTION: “It’s something a kid would say.”

LYRIC: Our little group has always been/And always will until the end

TEEN'S REACTION: “He could be talking about friend groups!”

KRISTIE'S REACTION TO TEEN'S REACTION: The "could be" is so right. When it comes to this song, nothing is certain.

LYRIC: And I forget just why I taste/Oh yeah, I guess it makes me smile

TEEN'S REACTION: “Ice cream does that to you.”

KRISTIE'S REACTION TO TEEN'S REACTION: Welp, from here on out, I'm singing this line to every bowl of ice cream that is put in front of me.

LYRIC: I found it hard, it’s hard to find/Oh well, whatever, never mind

TEEN'S REACTION: “It’s like me trying to find my remote for my TV. ‘Oh well. Whatever.’”

KRISTIE'S REACTION TO TEEN'S REACTION: NEVER GIVE UP ON THE REMOTE, YOUNG TEEN.