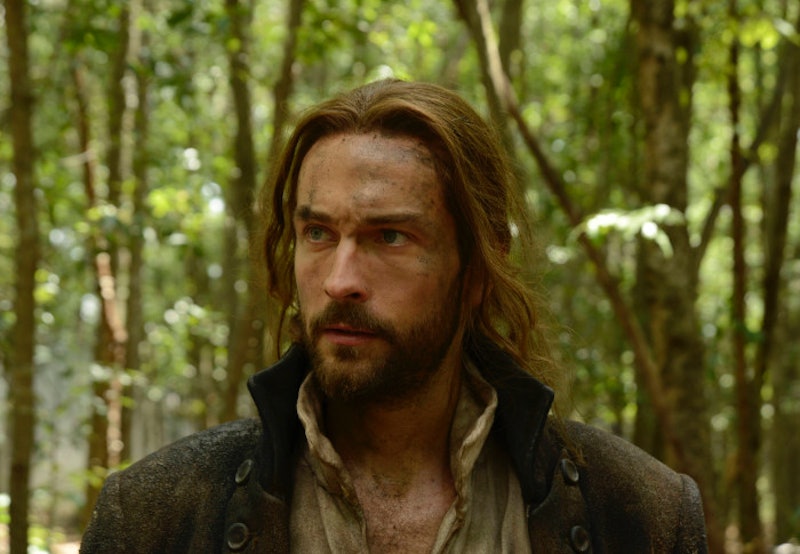 Can you believe it's been nearly 8 months since we last set eyes on our beloved Sleepy Hollow characters? I didn't even think it was possible for me to be this patient. However, now that we've officially entered the fall TV premiere season, it won't be long until we are once again reunited with Ichabod Crane, Abbie Mills & Co. for what's sure to be another action-packed adventure. What makes me say that? Well, for starters, shows centering around apocalyptic events and headless horsemen generally tend to be chock-full of exciting storylines and suspenseful plot twists. But aside from that fact, FOX has also generously gifted its dedicated Sleepyheads recently with a bevy of photos from the series' Season 2 premiere, which kicks off on Sept. 22.

Naturally, the network doesn't want to give too much away to fans (otherwise what would be the point of tuning in?), however, these images definitely contain important clues regarding IchAbbie's fate. Don't get too excited though, IchAbbie 'shippers. I'm not referring to any steamy hook-up shots… at least not yet. But for now, it's enough just to see these two back where they belong — sharing a united front against the many evils of the world. Though, as the saying goes, a picture is worth a thousand words, so without further adieu, feast your eyes on the photos below and see what clues they tell us about the upcoming season.

Though we could've suspected as much, it's certainly nice to see that both of these characters will indeed make it out of the unfortunate predicaments they found themselves in at the end of Season 1. (For those who need a refresher, Abbie was stuck in purgatory while Ichabod found himself locked in a coffin… again.) So the fact that they're both now currently in the land of the living — while also possibly breaking and entering — is most certainly a joyful sight to behold.

As the photo indicates, Ichabod and Abbie are fully armed with as much gun protection as they can carry, which means it's only a matter of time before there's another major showdown between them and the horsemen. Brace yourselves, people.

Jenny Is Alive and Well

Last we saw, Jenny Mills' fate was up in the air after the horseman shot her off the road in the season finale. But it seems she was able to make it out of there relatively unscathed, which is great news. Something tells me the good guys are going to need all the help they can get.

Henry Is Still Being Sneaky

Now that we know Henry is, in fact, the Horseman of War, there's no telling what new forms of evil he's about to tap into. You can tell just from the way he's walking though that he's up to no good. Ichabod, I think your son is in need of a serious time-out.

See those papers laid out on the table? I guarantee that's research on the latest set of horrors unleashed upon this town. (Seriously, how do people still live here?) So that means it's back to the archives for these two. One of these days Ichabod will learn to fully appreciate the power of Google.

Or at the very least a quick dip in a nearby river. But, of course, leave it to Tom Mison to make even dirt look sexy.