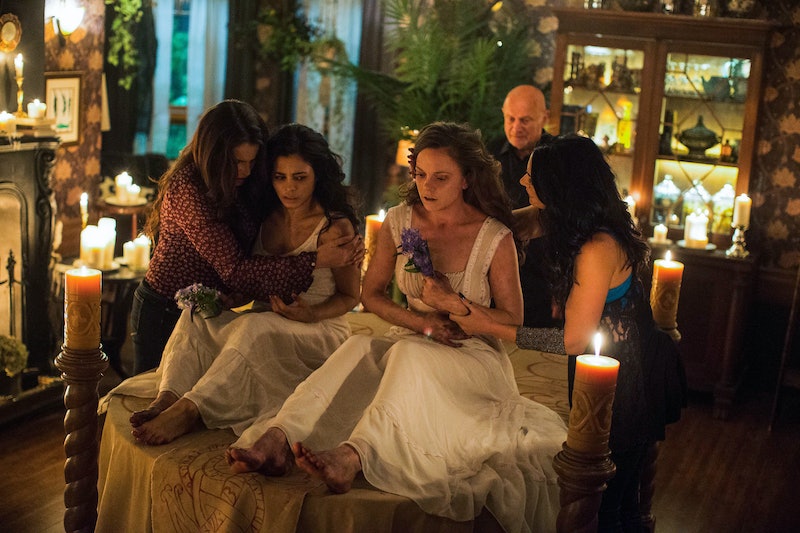 We already knew that Death with a capital "D" was coming to the East End and that it was taking one of our favorite characters with it. And, apparently, the time is finally here. During Sunday night's new episode, someone will die on Lifetime's Witches of East End and it's going to "haunt you for the rest of your life." At least, that's what the promo for Sunday night's "Smells Like King Spirit" promises. So far this season, we've speculated that both Gardiner brothers might die for their respective relationships with Ingrid and Freya but, in the latest promo, it appears that the death will affect Joanna the most.

The promo promises that "no one is safe" and flashes through scenes from the upcoming episode that include various bits of dialogue that discuss trust. Freya can't believe she trusted someone, Killian doesn't know who he can trust — basically, no one knows WTF is going down on the East End. And after the events of last Sunday's episode, who could really blame them? None of these characters can even trust what they think they know about their own pasts. And Freya and Killian were this close to living happily ever after, damnit.

Watch the promo for Sunday night's "Smells Like King Spirit" below.

First of all, from the episode's synopsis, we know that Tarkoff is back to take revenge against Frederick. Which may or may not explain this quick moment from the promo that you might have missed:

Is that Frederick? It's kind of difficult to tell — it's also kind of difficult to imagine that Joanna would be so upset to see Frederick die when she's been really on-the-fence about him ever since he came to the East End. But even though he's been plotting to kill her and playing host to an evil king's soul, it still has to hurt to see your child die. Right? And with what we know from the synopsis about Tarkoff looking for revenge, it's definitely possible for the show to get rid of him. Frederick was just introduced this season and he's kind of been a sketchy jerk the entire time, so no one would actually miss him. He's also aligned himself with evil and we all know how that worked out for Dash and Killian's mother in Season 1. Evil might always exist on the East End, but it definitely doesn't win.

While Frederick is all over this promo, Ingrid only appears in a flash at the very beginning — in the same asylum-like place where maybe-Fredrick is being tortured and Joanna and Wendy are shown walking into. Ingrid's been in the most precarious situations so far this season — she was involved with the Sex Monster and now she's giving things with Dash a shot even though he's a cold-blooded murderer. What if Dash is the character we can't trust? Maybe Dash has been fooling us all along with his "I can't control my impulses" excuses for murder and he's been working for Tarkoff and the King this whole time. And even if he was being totally honest, it's entirely possible that he could catch Ingrid off-guard and kill her.

Either one of these deaths could explain Joanna's grief at the end of this promo. Maybe she finally realized that Frederick didn't have a choice and he lost his life because he refused to kill her and she feels terrible about ostracizing him. Or maybe she's just totally distraught that, after all of this time she spent protecting her, Ingrid is dead for real. We were promised a death in Season 2, and now we know it's really going to hurt.