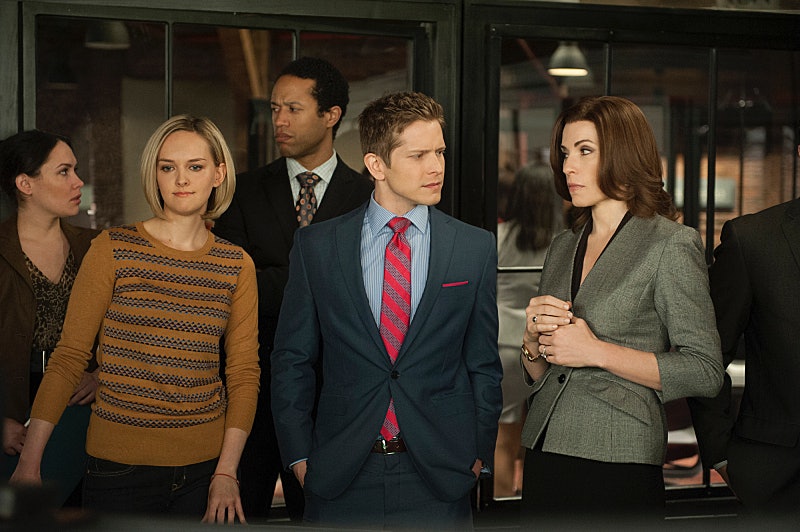 Listen, I know you're feeling bad. Fall TV is an overwhelming time. Your DVR gets stuffed, you're sad your favorite little-sitcom-that-could got canceled mid-season, and just when you think you can catch up on your broadcast shows, your friend hands over their HBOGo password because you just have to see True Detective. Then, the most shocking plot twist to hit television since Chandler and Monica ended up in bed together happens on Season 5 of The Good Wife and the guilt settles in: I knew I should've stuck with it, you probably thought, as everyone discussed the episode around the break room at work and you struggled to avoid spoilers with your hands over your ears. Is it too late to catch up? you might now wonder, gazing at your co-workers jealously, wondering if this is karma for making fun of the guy who didn't watch Fargo this year.

But fear not, cable-loving friend. There's still plenty of time to catch-up on the critically-acclaimed fifth season of The Good Wife before the new season premieres on Sept. 21. You may have to skip a few days of work to fit in those 22 episodes, but at least you'll be ready for the water cooler chatter when you get back.

Got an Amazon Prime or Hulu Plus account? Then you can not only catch up on all of Season 5 of Lockhart & Gardner's adventures, but every other season as well if you've really been slacking off. Never even seen The Good Wife and want to get a taste before you commit? You can watch the pilot for free on Amazon as long as you're cool with ads. And if you've never used Amazon Prime, you can start a 30-day free instant video trial and get through the season with an episode a day. You could also just buy the episodes from Amazon, but maybe that's too easy.

Use Those Cable Subscription Perks

Most cable companies make a few of last season's episodes available to their customers leading up to the season premiere. It'll depend on your provider, but it's worth a shot.

Make It Your Own

We've all been there. You're binged on all available episodes of Scandal or The Walking Dead on Netflix Instant and then, just like that, you're caught up on everything Netflix offers. What do you do in your post-midnight fit of desperation? Pay up on iTunes of course. You can buy the whole season, in HD, on iTunes for $39.99, or individual episodes for $2.99 (prices are matched on Amazon Prime, if you're not feeling like dishing out dough to Apple).

No, seriously. The Good Wife isn't on Netflix (unless you somehow still have a DVD plan), but if you happen to be taking a last-minute summer rendezvous to England, you're in luck. British Netflix (which your account automatically switches over to when it crosses the Atlantic) has the entire series available to stream. You can see Buckingham Palace next time. (Of course, you could just buy it on iTunes and skip the whole $1000 dollar airfare issue.)