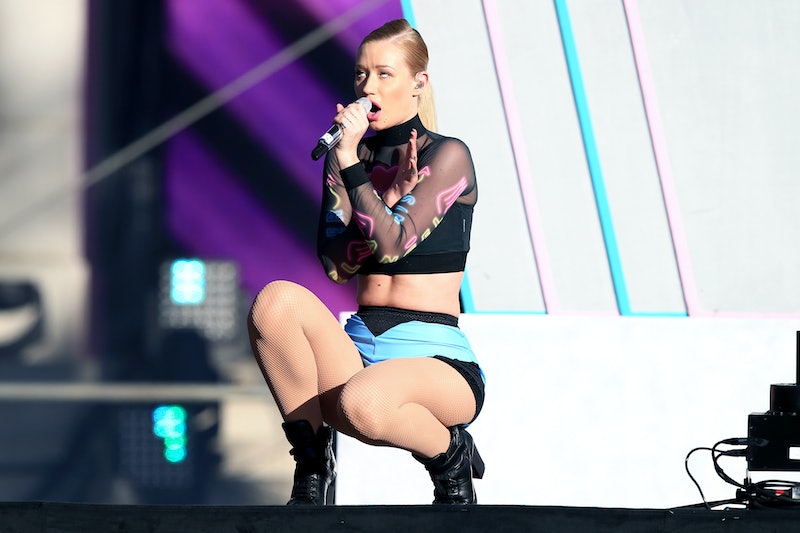 Considering the current atmosphere of outrage and legal action surrounding leaked nude photos, it should come as no surprise that someone, somewhere would try and profit off of this. No, I'm not talking about the Florida art show that planned to incorporate Jennifer Lawrence's nudes, which has thankfully since axed that plan. Instead, I am talking about Iggy Azalea's alleged sex tape. As in, Azalea is in the middle of a sex tape scandal that is bizarre for two reasons. In the first place, Azalea has denied that it is her in the tape. In the second place, Steven Hirsch of the porn company Vivid Entertainment is actually offering to pay her a ton of money for the right to distribute it.

To be fair, Hirsch has already got a moral advantage over the hacker that leaked all of those intimate photos of celebrities two weeks ago for the sheer fact that he is trying to get Azalea's permission first. According to Hirsch, "There is little doubt in my mind that the person that I saw in the teaser of images from the tape is Iggy Azalea" and for that reason he " will definitely try to make a deal to distribute the tape." However, both Azalea and her representatives have denied that any such tape of her exists. The rumors remained so pervasive that Azalea felt the need to use her Twitter to speak up on her own behalf.

Azalea might be speaking in particular reference to her own situation, but her words apply equally to the fate of the hundreds of female celebrities whose nudes — real or fake — are now on the Internet for the world to see without their consent and definitely without their approval. For Vivid Entertainment to be trying to cut a deal to make money off a sex tape that Azalea says isn't of her, or to desire to market it as if it was her, would be one thing, but if they attempt to in any way distribute the tape without her permission then it's a sex crime.

Leaked nude photos and sex tapes are far from a new thing in modern society, but this is the first time that there has been such a public outcry and solidarity with the victim. In the past, the overwhelming victim blaming had most celebrities either apologizing for their "mistake" or just waiting for the scandal to die down. Now, for what seems like the first time, celebrities are taking a stand, taking action, and having their fans support them with the knowledge that it's not the victim's fault but the fault of the person who stole their private photos to begin with.

We're definitely a long way off from a world in which hackers can be found, arrested, and tried for the sex crime of stealing a celebrity's intimate pictures, but we're taking large steps forward in the meantime. The fact that this situation has opened up a dialogue about respect for women's bodies and an individual's right to take whatever kind of pictures they want without having to constantly worry if they'll get stolen and distributed is the true victory for right now. Whether or not Azalea does turn out to be the woman in the tape isn't really the point; the point is that distributing it without her permission would be wrong and the world is waking up to that realization at last.

More like this
Sandra Bullock, Girlboss Extraordinaire
By Matt Harkins & Viviana Olen
Spice Girls’ Net Worth: The Richest Member Is Wealthier Than The Rest Combined
By Hugh McIntyre
Long Live Bennifer!
By Allie Jones
Why The '365 Days' Sex Scenes Are Good, Even If The Movies Aren’t
By Arya Roshanian
Get Even More From Bustle — Sign Up For The Newsletter