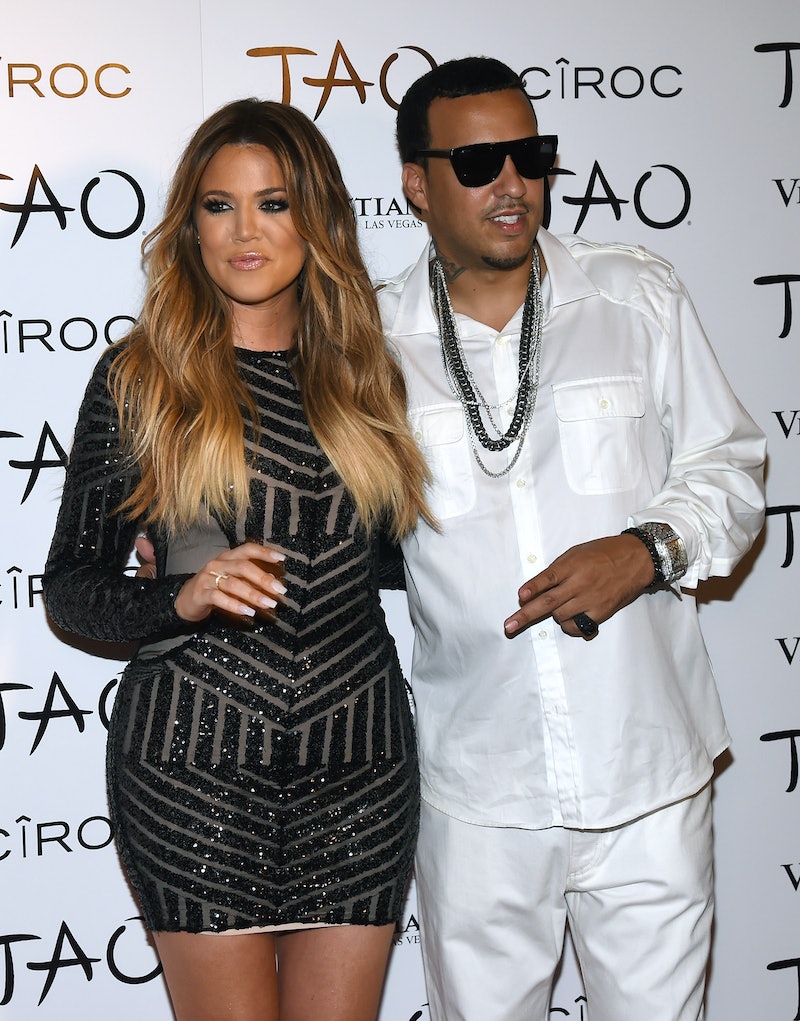 One of French Montana's latest singles may be called "Don't Panic," but to be honest, I'm kind of panicking over here! Rumors are circulating that French Montana and Khloe Kardashian have broken up. There has yet to be an official statement from either party's camp confirming or denying the reports, so I'm very curious about their relationship. With Kourtney & Khloe Take The Hamptons set to premiere this fall, I'm wondering whether any of these current relationship issues that Khloe and French are having will manifest themselves on the show, which was filmed a few months ago.

The two have been pretty inseparable since they were first seen together. On July 24, French appeared on the Angie Martinez radio show where he confirmed that he and Khloe were in fact an item. "She holdin' me down," he said. Khloe even stopped by the show to talk with Angie for a few minutes before leaving the studio with French. When addressing the negative feedback the relationship has gotten, Khloe said:

People are going to comment no matter what. If I dated like the most clean cut perfect guy, they're going to comment, like that's just the way it is. So, if I'm having fun and if I like this kid, no one else should care. They're not fucking him, what do they care... or maybe they are, I don't know.

This quote is rather pertinent now, considering HollywoodLife brought forward an unnamed source who claims that cheating was one of the reasons Khloe and French split. E! Online, however, reported that despite the two really getting along, French's "needy, obsessive" behavior caused the split.

Due to the fact that the breakup news seems to be fairly recent, I would wager to guess that we may not see it unfold on Kourtney & Khloe Take The Hamptons, but who knows, maybe we'll see a few glimpses of unrest between the two. I am going to try to stay positive in the wake of my favorite Kardashian Kouple splitting. Let's take a look at some of the best elements of both Khloe and French's lives that I hope make it into the new spinoff.

French is known for having a soft spot when it comes to exotic animals. Take for example, Julius, the small monkey who wreaked havoc on French's Instagram for a few weeks. I expect to see some interaction between the Kardashian clan and the animal kingdom.

There's nothing I love more than a couple who just looks good together, and these two really know how to turn out any outfit. But alas, I guess we won't be seeing a couples' Halloween costumes from these two.

For those of you who don't know, Coke Boys is not only a brand that French is affiliated with, but it's the name of a few of his mixtapes. I expect to see, or at least hear, some mentions of Coke Boys products.

Khloe starred in and helped create the concept for French's music video. The show's trailer makes it seem very likely that we'll get some behind the scenes shots of the video.

I, as a fan of Khloe and French's relationship, have no issue with seeing fire on the set of the "Don't Panic" music video, but I'd prefer to not watch their relationship go up in flames during this season. I thought the two were a great match for each other, so of course I'm a bit upset that they've called it quits. I can't be the only one who really wanted a Khloe & French spinoff a la Khloe & Lamar, right?