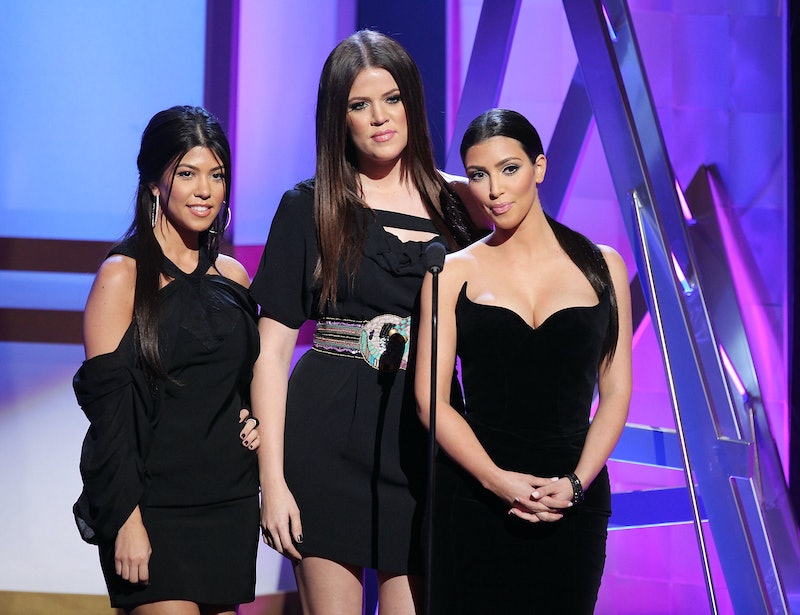 I know what you're thinking. If there is something the world lacks, it is more Kardashian-based programming. Have no fear, Kourtney and Khloe Take the Hamptons is almost here. The latest Keeping Up with the Kardashians spinoff will premiere on Nov. 2. Sure, KUWTK is the house that Kim built, to a large degree, but it's great when we get to see her sisters go off on their own and have storylines specific to their personal dynamic. While we may miss Kim's life of excess, selfies, and Kanye news, everyone knows Khloe and Kourtney have got a certain edge of realness to them that makes the sisters a delight to watch. Not to mention that, by default, any Khloe and Kourtney off shoot is going to include way more Lord Disick in our lives, which means way more fun for everyone.

This of course, is not the first time the girls have gone off on their own without Kim. One memorable past KUWTK spinoff was Kourtney and Khloe Take Miami. The Hamptons edition brings the KUWTK spinoff series count up to five (other shows include the short-lived Khloe and Lamar, Kourtney and Kim Take New York, and the upcoming DASH Dolls , focusing on the lives of DASH employees rather than the sisters themselves).

So what are some predictions for what we might see on this latest Krazy Kardashian adventure?

We all know that Khloe's current beau French is pretty shady. I'm inclined to agree with the speculation that he's just using her for her fame and to catapult himself into the limelight. Think about how many times you've heard French's name after he was linked to Khloe. Now think about how many times you heard it before that. Coincidence? Our girl Khloe is stubborn to a fault; sometimes its for good, like when she uses it to impart wisdom on those she cares about. But sometimes it is for the righteously bad, and Khloe is not above rushing into something, especially if she thinks her family wants her to do the opposite. If you ask me, this is going to come to a head as French is around more and more. It'll be interesting to see if Scott Disick, who has always been a pretty solid bro to Khloe, will smell something fishy and call the guy out on it.

An Orange Is The New Black Crossover

Okay this one is a longshot, but by now the entire internet is scandalized to learn that a much less famous Jackie Cruz, aka OITNB's Smiths' loving Flaca, made out with Kourtney in 2009's Miami spinoff. The story goes that the two befriended each other when Cruz was attending the same art class as Kourtney. They became fast friends, and being the season where Disick and Kourtney were having major problems, she decided to make out with Cruz to make him jealous. The two are still friends and now that she is a little more famous it would make total sense for Cruz and Kourtney to say, grab lunch if they both happened to be in the same place at the same time.

It wasn't that long ago that Disick lost not only both of his parents, but also had a completely undignified drunken display at the Versace mansion. Partying is his Achilles' heel, and being in Hamptons' party central is only going to enable his deeper problems with alcohol. Add to that the tragedy of losing his parents at such a young age, and its essentially a ticking time bomb of regret.

Khloe Leaving In A Huff

Remember the infamous go take a selfie-gate from the family's Thailand trip? Khloe sensed the family's dismay with her dating habits, so she did what any reasonable person would do and decided to hop on a plane back home. With all of the buzz around Khloe's relationship, it's pretty much a lock that Kourtney will be the next sister to say something about it.