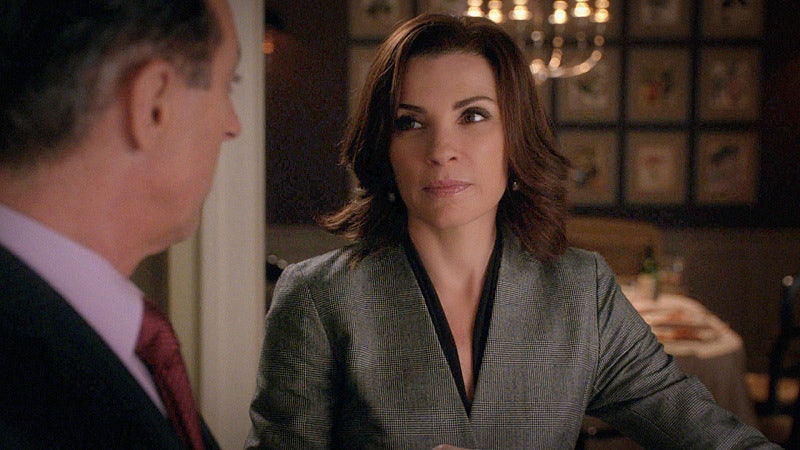 Alicia Florrick had an tough year in Season 5 of The Good Wife. She received quite a bit of backlash from Lockhart/Gardner for starting a new firm with Cary; she and her husband agreed to essentially split up but keep their marriage going in the public eye for the sake of both of their careers; and sadly, all of the characters had to deal with the tragic death of Will Gardner. Will's passing was especially hard on Diane, Kalinda, and, of course, Alicia. Now she, and Good Wife fans, have zero hope for a romantic resolution with Will in the wake of Josh Charles asking to leave the series. With these personal issues and the plea Eli made to Alicia to have her run for State's Attorney looming over her, will Alicia have time for a new love interest in Season 6? Don't hate me, but the odds aren't great.

Juliana Margulies told TVLine the time isn't right just yet for a new Alicia love interest and I have to agree. Look, as much as seeing Alicia finding love and happiness would make me unspeakably happy considering everything she's been through, I echo Margulies' sentiment. It really hasn't been that long since Will's death. Alicia and Will loved each other for a long time and despite being apart and getting in professional and personal fights, it always seemed like they were still meant for each other in the end. If I have to put it in Internet terms, for me they were The Good Wife OTP. So it just doesn't seem right for Alicia to start off Season 6 finding a new man right away. Maybe halfway through the season the show could start exploring the possibility but for a while, it seems best to let the Will of it all cool down for a little bit longer.

Plus, if Alicia does decide to run for State's Attorney she'll have her hands completely full with the campaign. Perhaps the first few episodes will involve her being persuaded to say yes to the campaign by Eli and then halfway through the season the show will explore that campaign along with a potential new campaign manager played by Steven Pasquale. Pasquale is only slated to appear in two episodes but who knows if that contract could get extended later on in the series? If Alicia says yes and this new campaign manager is officially hired, perhaps he could be a potential love interest later on down the road? Then there's always the possibility of love between Finn Polmar (Matthew Goode) and Alicia but The Good Wife creators Robert and Michelle King tell Zap2It there is no romance between Finn and Alicia right now. Finn is just a professional that Alicia respects. But they didn't take the possibility of a future romance off the table completely.

But let's not forget that regardless of her relationship with other men, Alicia will have to pretend she loves another. She and Peter did agree to a professional marriage, so even if something were to happen for Alicia and another man behind closed doors, there is always a possibility of scandal if either take on romance. In an interview with Zap2It the Kings said the show will explore the idea of a marriage that's "better on paper than reality" and that there's also a sense Peter still has feelings for a his wife, but Alicia's not sure if revisiting that relationship could be possible.

To be honest, I hope the show stays away from Peter and Alicia rekindling and instead allows Alicia focus on something at which she's always been great: Her job. I hope Alicia feels ready to take on the new challenging campaign of State's Attorney. It's time for the good wife to get the political spotlight.

More like this
Oops! The 'Stranger Things' Monopoly Game Has Spoilers For Season 4
By Alyssa Lapid
'Heartstopper's Kit Connor Revealed His Hopes For Season 2
By Nola Ojomu and Sam Ramsden
'Unforgotten's Brand New Character Joins At A Pivotal Moment For S5
By Bustle UK
'Gentleman Jack’s Cast & Crew Are Keen On Season 3, Too
By Frances Stewart
Get Even More From Bustle — Sign Up For The Newsletter