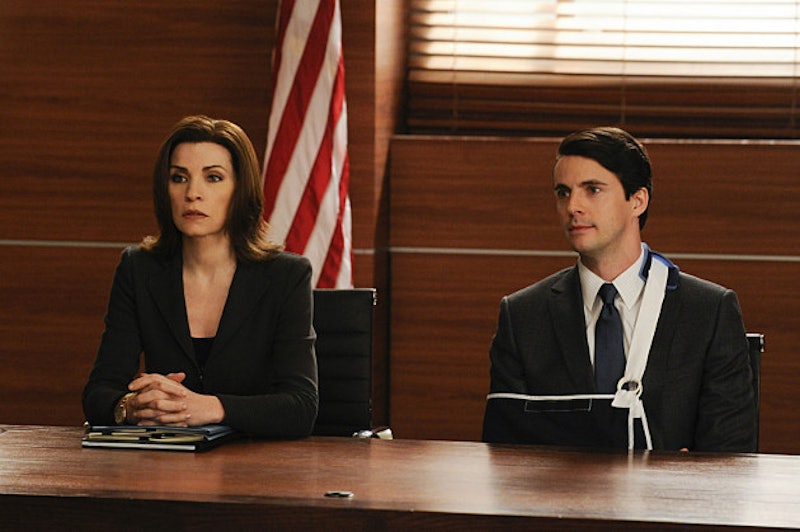 We might not ever get over Will Gardner's death on CBS' The Good Wife, and it's definitely too soon to talk about Alicia moving on — but the fact remains that the writers have been making her and new character Finn Polmar spend an awful lot of time together in the past few episodes. So we can't help but wonder: Could Finn possibly be an even better match for Alicia than Will ever was? I know, I know — it's blasphemous to even entertain such an idea. And yet, there's a lot of compelling evidence to suggest that Alicia and Finn would be great together. And with the show's writers themselves admitting that there's great chemistry between Julianna Margulies and Matthew Goode, could a romance be very far off?

With Alicia's marriage to Peter very much on the rocks, the high-strung attorney could use a little lovin' to help distract her from her ballot box-stuffing husband, pot-smoking son, phone-tapping agencies, and murderous clients. So let's break down Finn's viability as a suitor, category-by-category, to determine whether or not he's worthy of Alicia's love... and whether or not he's more compatible with her than former flame Will.

Despite how shallow it makes us feel to admit it, looks are pretty important when it comes to a romantic match-up. So let's just get it out of the way first, shall we?

Will: Definitely a handsome man. Maybe not your traditional matinée idol looks, but certainly nothing to scoff at, either.

Finn: There is something undeniably magnetic about Finn's face. Is it those steely eyes? That thick, black hair? The chiseled jawline? His adorable Clark Kent glasses? Whatever it is, Finn's got it.

(No offense to Josh Charles — it would be tough for anyone to compete against Matthew Goode in this category.)

Even if someone is really really ridiculously good-looking, it doesn't mean anything if you don't have that spark.

Will: The writers can say whatever the want about Margulies' chemistry with Goode. When it comes down to brass tacks, Alicia and Will had a steaming hot chemistry that can't be duplicated.

Finn: Granted, he hasn't really had an opportunity yet in his five episodes to create any sort of crazy chemistry with Alicia — they've mostly interacted in a professional environment. The one time he saw her in bed, she was crying over Will and he was still healing from a gunshot wound. Not so sexy.

Another very important thing to look at in a potential romantic suitor is their job security. No one wants a guy who can't pull his own weight.

Will: Yes, he was a name partner at a major law firm looking to expand from Chicago into both NYC and LA. But he was also accused of bribery, almost got disbarred, was suspended from practicing law, and was recklessly pursuing an expansion that jeopardized the financial well-being of his firm.

Finn: A state prosecutor who filed to run for States Attorney simply to keep the current S.A. from firing him (he can't fire an opponent, for obvious reasons) — but then the Governor of Illinois personally endorsed his candidacy, making it look like he has a real shot at the position.

Will: Lots of people liked Will. He was buddies with lots of important lawyers and judges thanks to his basketball league. He and Diane were terrific partners and loyal friends (except when they weren't). And Kalinda was not only his crackerjack investigator, but also a very important ally.

Finn: His best friend is the current States Attorney... who didn't hesitate to throw him under the bus when the kid Finn was prosecuting went crazy and shot up a courtroom. Ouch.

Will: He was a great lawyer, which meant he was a shark both inside and outside the courtroom. He wasn't incapable of having a good time, but more often than not he was brash, outspoken, and cynical. And he had quite a temper.

Finn: A decidedly milder person than Will, which in itself is not necessarily a good or a bad thing. It's hard to rank either man's personality as inherently "better" than the other's, but given Alicia's own Type-A personality and increasingly hectic life, maybe someone calmer is exactly what she needs to help her relax.

Well, there you have it, folks. Finn wins by a hair... pretty much by virtue of being a living, breathing person. While there's no denying the sizzling chemistry Alicia shared with Will, it seems to us she has more long-term viability with Finn — if it weren't for his wife, of course. But no good love story is complete without obstacles, right?

More like this
Alicia Silverstone Has Recreated An Iconic 'Clueless' Scene
By Frances Stewart
Lilibet & Prince Charles’ First Meeting Was Emotional, According To Reports
By El Hunt
Everything To Know About The Terminal List Season 2
By Kadin Burnett
6 Shows Like Stranger Things To Get Over Your Emotional Season 4 Hangover
By Kadin Burnett
Get Even More From Bustle — Sign Up For The Newsletter