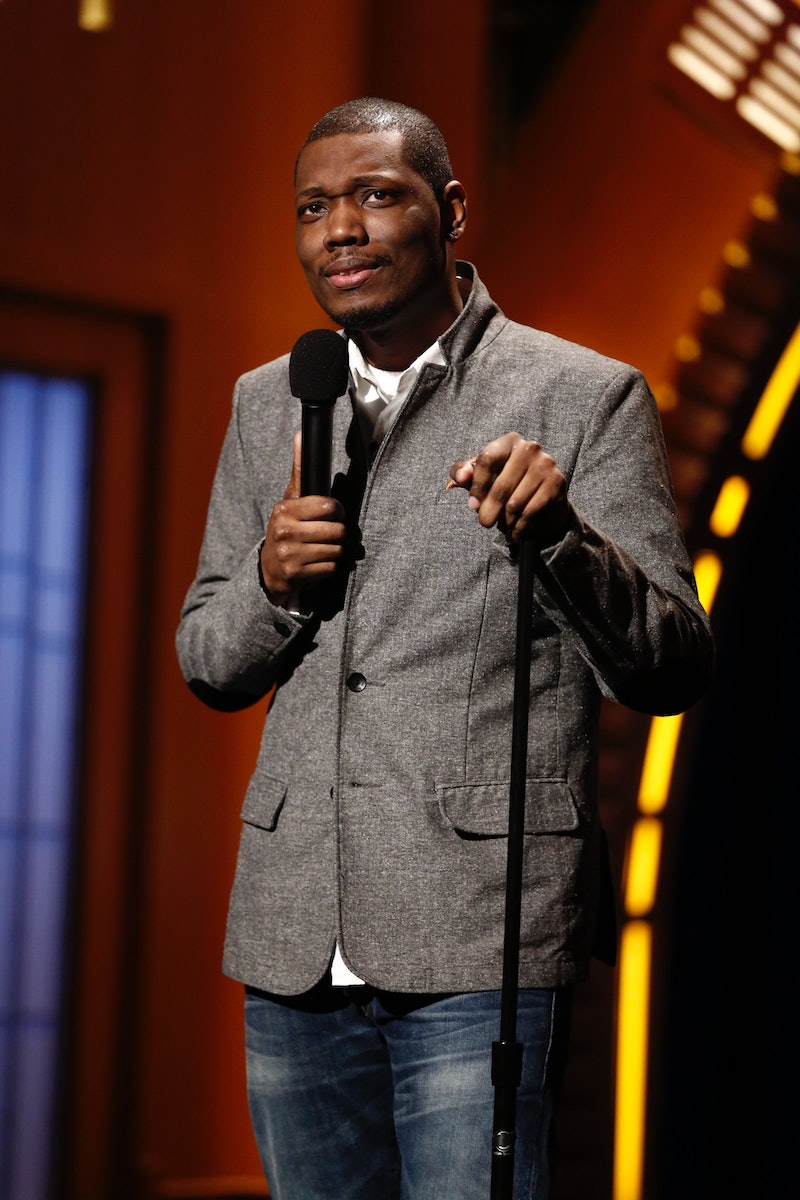 Exciting news for comedy fans! Michael Che is the new host of Weekend Update on Saturday Night Live. There's good news for folks who aren't exactly familiar with Che's work, too — you're about to get acquainted with one of the funniest voices in comedy. In fact, even though Che's career and presence is about to skyrocket, he's actually been cracking people up for a while with his signature fusion of serious stuff along with the hilarious.

In fact, Che has already been making you laugh on Saturday Night Live as he's been a writer at NBC's stalwart sketch show for quite some time. And perhaps you've seen him as a correspondent on The Daily Show . He recently was a part of a very on-point and funny segment regarding the situation in Ferguson following Michael Brown's death in which he continually fled different locations so that he could find a safe place to report. (He ultimately had to go to outer space.)

Che has demonstrated elsewhere that he has a knack for fusing the political with the comical, as well. On MTV's Inside Joke , he tackled gentrification in New York City. The video (which is featured below) will crack up even those who don't live in NYC.

Che is also an awesome standup comedian, who has performed on Late Night with Seth Meyers, as well as The Late Show.

Bottom line? This guy is funny as hell and seems like he's a not only a natural fit for Weekend Update, but also a perfect choice, in that he'll help move Weekend Update forward after the Seth Meyers-era. An important step in keeping SNL relevant with its signature sharp wit. As Lorne Michaels told the New York Times, "This is about a new era, what feels appropriate for now. That’s why we did a lot of combinations and tests, and this is kind of where we came out."

Want confirmation of that? Check out some of Michael Che's hilarious moments below.

On Inside Joke, Dealing With NYC's Gentrification

Killing It On The Late Show with David Letterman

More like this
Twitter Is In Utter Meltdown After 'Derry Girls’ “Poignant” Finale
By Sam Ramsden
Here’s Everything Coming To & Leaving Netflix In June
By Alyssa Lapid
Britney Spears Met The Weeknd & Sam Levinson, So She May Actually Be On 'The Idol'
By Jake Viswanath
Kaley Cuoco & Tom Pelphrey Just Made Their First Public Appearance As A Couple
By Hugh McIntyre
Get Even More From Bustle — Sign Up For The Newsletter