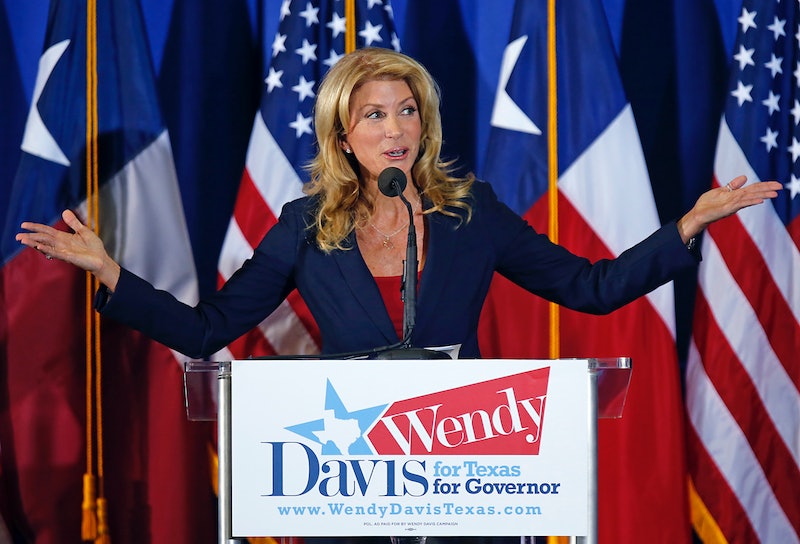 One of the primary themes in Wendy Davis’ new memoir Forgetting To Be Afraid (Blue Rider Press) is the importance of recognizing how others have been shaped by their backgrounds and experiences in order to best understand them and their opinions. It’s a fitting motif for a gubernatorial candidate whose memoir is much more a personal history than a political autobiography.

In Forgetting To Be Afraid, Davis chronicles her unstable, often meager childhood; her pregnancy at age 18; her delicate balancing act of college, single motherhood, and two jobs; her time at Harvard Law School; the painful experiences of her two abortions; and the making of her political career, all the while illustrating how these experiences formed her and made her the strong-willed politician she is today.

Davis rose to national fame last summer when, as a Texas state senator, she launched a historic, 13-hour filibuster that temporarily blocked Texas’ restrictive abortion law SB5. In the longer term, her filibuster established the force and determination of the pro-choice movement in conservative Texas.

It also paved the way for her gubernatorial campaign. This November, Davis will face Texas Attorney General Greg Abbott at the polls, the man who was once her foe in a state redistricting battle that all but guaranteed she would not have been re-elected to serve in Texas Senate following another contentious filibuster she’d led. “There is part of me that believes that [Abbott] agreed to the settlement of my redistricting case in the hopes that it would remove any incentive for me to run statewide by keeping me content in the senate,” Davis writes. “But I don’t placate easily.”

Davis currently trails the attorney general in the polls by a significant margin, but an unforeseen victory in November would not exactly be the first time she beat all odds. Here’s a look at some of the highlights of Davis’ memoir, from the funny to the poignant to the (exceptionally) inspiring.

“Of all the memories that have stuck with me, and formed me, and made me who I am, the ones from spending time with my grandfather are among my most cherished, because the experience drove home such a powerful point to me: the importance of having a voice, how painful it is to lose it, and how important it is to speak up for those who can’t speak for themselves, and to be true to what they would say if they could.”

ON UNDERSTANDING HER MOTHER

“I was a young adult when my mother first told me [the story of how she put her three children in the trunk of her car with the intention of getting in with us and starting the engine] … It was an upsetting and disturbing story for me to hear, of course, especially as the mother of two daughters, but as I’ve processed it, I’ve moved from my initial feeling of horrified disbelief — How could she have thought about doing that to us? — to one of compassionate astonishment — How incredibly depressed and desperate must she have been to want to do what she almost did.”

ON HER FIRST MARRIAGE AND HINDSIGHT

“I didn’t know how to have a baby and not be married — in the world I’d grown up in, women didn’t choose to do it that way, have babies on their own. But if my present self could have advised my eighteen-year-old self, she would have told me this: Don’t do it. Just move back in with your mom and have your baby. Don’t go down this road. … I would have told my younger self to do so many things differently, but I cherish the fact that it was those very decisions and challenges that made me the person — and the mother and the public servant — I eventually became.”

ON GETTING INTRODUCED TO HER SECOND HUSBAND

“Shy as always, I’d asked my father to make an introduction, and before I knew it, he’d cast himself in the role of the least subtle matchmaker imaginable: ‘How do you feel about younger women, Jeff? Because my daughter would really like to go out with you,’ [he asked].”

ON HER HARD WORK AND DETERMINATION

“I have no doubt in my mind that whether I’d married Jeff or not, I would still have gone to law school. My head was down. I was working hard to put myself on that path. Through my efforts and grades, I had made it possible to affordably attend TCU through a combination of financial aid grants and an academic scholarship. The fact that I was already on my own trajectory and that I’d already come as far as I had on my own before we’d married was something Jeff himself was extremely sensitive to. And I loved him all the more for it.”

ON HER SECOND UNDESIRED ABORTION

"An indescribable blackness followed. It was a deep, dark despair and grief, a heavy wave that crushed me, that made me wonder if I would ever surface. It would take me the better part of a year to ultimately make my way up and out of it. And when I finally did come through it, I emerged a different person. Changed. Forever changed."

ON DECIDING TO GO NEGATIVE DURING HER FIRST STATE SENATE RACE

“Because of our financial limitations, we would need to focus on our opponent’s negative job performance, a plan I’d finally and reluctantly agreed to after hearing my team’s convincing argument: You’re asking voters to fire someone from his job, and they’re not going to fire someone, no matter how great you are, unless they have a reason to do that. … I am not embarrassed to admit that I actually cried over that decision. … In the end, though, I trusted [my team]. And my gut told me it was the right thing to do. The voters deserved to know, and this time, unlike in my first city council race, I knew that our negative attacks were justified.”

ON BIPARTISAN COOPERATION AND PASSING A SEXUAL ASSAULT EVIDENCE BILL

“One of the most important pieces of legislation that I worked on during the last two sessions, and one I was proud to gain bipartisan support for, was Senate Bill 1636, the sexual-assault evidence bill. In 2011, during the eighty-second session, I’d gotten a bill passed requiring law-enforcement agencies all around the state to go through the backlog on their evidence shelves and tell us what needed to be tested, and when we came back in 2013, in the eighty-third session, we got the audit, which showed that there were at least 20,000 untested kits. Working with one of my Republican colleagues, Senator Robert Deuell from Dallas, we secured about $11 million to test that backlog. … Law-enforcement officials say they’ve already gotten several hits and DNA matches as a result. Helping to bring sexual predators to justice and to bring closure to victims is incredibly gratifying.”

ON THAT HISTORIC FILIBUSTER

“Very quickly after receiving the official ruling from the lieutenant governor on the floor, my Democratic colleagues and I exited the senate chamber, where we were met by hundreds and hundreds of people, joyously shouting. We were embraced by therm and cheered by them as we spoke and thanked them. There was so much emotion that it’s hard to even describe what that moment felt like. It was surreal. Who among us could have possibly predicted the events of the day?”

More like this
30 Books To Read This AAPI Heritage Month
By K.W. Colyard
Selma Blair Wrote Through The Pain
By Samantha Leach
Zosia Mamet Opens Up About Her Eating Disorder
By Zosia Mamet
The 20 Best Audiobooks To Fall Asleep To
By Aoife Hanna and K.W. Colyard
Get Even More From Bustle — Sign Up For The Newsletter