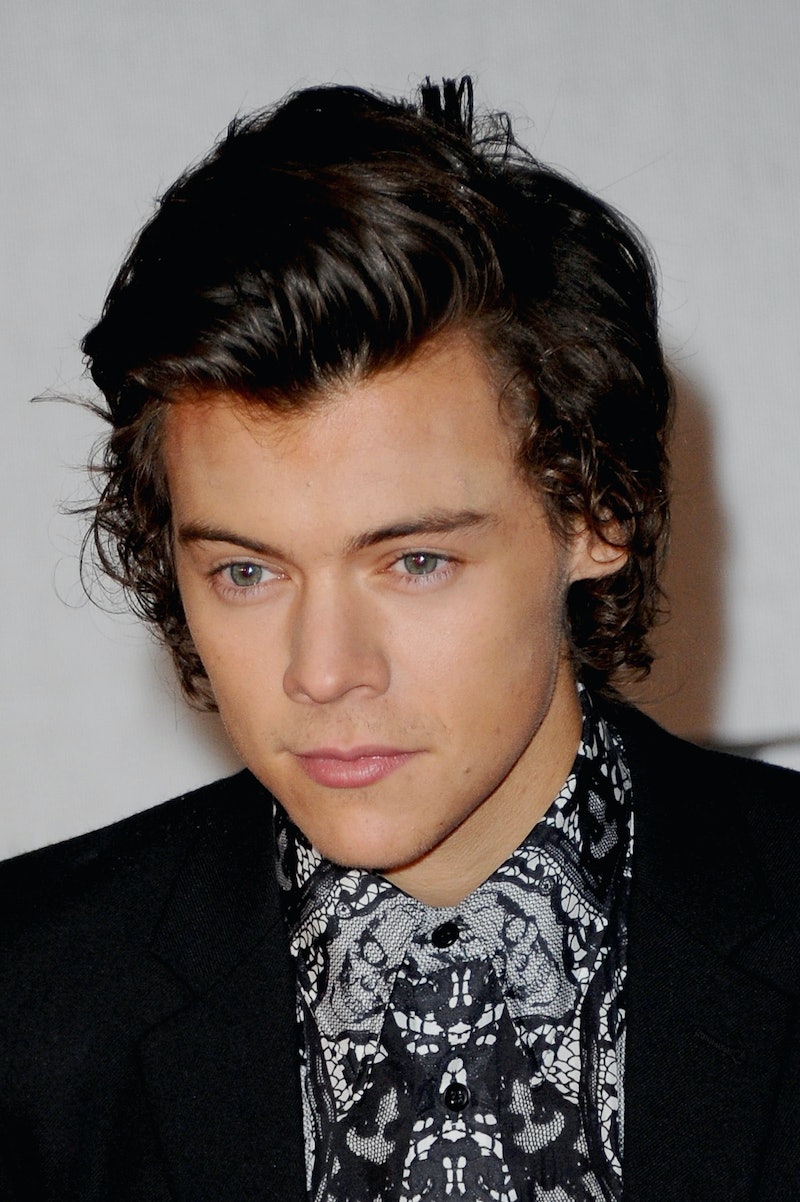 For the record, "Styles" is not a Jewish last name — nor should Jewish teens start telling their guilt-inducing mothers that they can marry Harry Styles because he is a newspaper-approved powerful Jew. Crushable has pointed us to the fact that The Jewish Chronicle, a U.K. newspaper, has put Harry Styles on a list of powerful Jews. Fun fact: The One Direction frontman is not Jewish. And no, no one has yet to confirm whether or not he has been circumcised.

Now, despite the fact that I will openly admit that I am a Hebrew School drop out, I did become a bat mitzvah (peak childhood moment!) and my last name is Schlossberg. It's no secret: I'm Jewish. Am I a great Jew? No, I like bacon, but I'm Jewish enough to say that it's pretty odd for a Jewish newspaper to condone a non-Jewish celebrity for being an A-plus Jew. That's like saying a Jewish person is a phenomenal Christian because she gets excited by red Starbucks cups and knows most of the words to Jesus Christ Superstar. (By those standards, I am.) So what's the Chronicle's argument for placing Styles on this list, then? The Chronicle actually admitted that it knew that Styles was not a matzah-consuming, menorah-lighting boy, as it wrote:

The One Direction star may not be Jewish but he seems very much at ease with a Jewish lifestyle [...] He was pictured wearing a silver Star of David at the Teen Choice awards and makes regular references to Jewish life on Twitter, hangs out at kosher eateries and is not afraid to throw the odd Yiddish word or two into the conversation. Thanks to his close relationship with Jewish music video director Ben Winston, his Jewish knowledge is stronger than one has any right to expect from a 20-year-old boy-band singer from rural Cheshire. Thanks to Styles, millions of British teens have become familiar with Purim, Pesach and shepping nachas.

So essentially, Styles is serving as Hebrew School by proxy for millions of teens.

While of course it's good for non-Jews to become knowledgable about Judaism — and you know, that it exists as a religious entity — there are other celebrities who actually are Jewish who are capable of doing this, too. Do you remember Adam Sandler's "The Hanukkah Song," parts one, two, and three? I do, and I remember it because during Hanukkah —a time when many Jews, to quote Sandler, "feel like the only kid[s] in town without a Christmas tree" — it allowed me to realize that many celebrities light menorahs, too. It's more refreshing for Jewish teens to hear about other celebs who share their religious beliefs — especially when there are so many. The late and brilliantly funny Joan Rivers! Sarah Silverman! Natalie Portman! Adam Levine, for crying out loud!

While it's never a bad thing for people who are totally clueless about Judaism to become aware of its existence — and while it's obviously cool that Styles is obviously open to Judaism — it's a very unfitting choice for a Jewish newspaper to put Styles on a list of powerful Jews. It's not like the Jewish community is totally devoid of talent — in fact, it's rife with it. Those celebs mentioned above are way more influential than Styles ever will be — even if Styles did once tell his Jewish fans, as Crushable also pointed out, to have an easy fast on Yom Kippur:

But the good news is that perhaps this can give some Jewish tweens hope that Styles will perform at their bat mitzvahs. Damn, I'm sure many 13-year-old One Direction fans were crossing their fingers for "What Makes You Beautiful: Bat Mitzvah Edition." Sample lyric suggestion: "...you light up my world with your shiny braces..."

More like this
'Dirty Dancing's Jennifer Grey Wants Harry Styles To Be The Sequel’s Love Interest
By Grace Wehniainen
Harry Styles Is Set To Rival Tom Hardy With His Own CBeebies Bedtime Story
By El Hunt
Lisa Marie Presley Reviewed Baz Luhrmann’s ‘Elvis’ Movie On Twitter
By Grace Wehniainen
Is Megan Fox Pregnant? MGK Gave A Shout-Out To Their “Unborn Child” Onstage
By Hugh McIntyre
Get Even More From Bustle — Sign Up For The Newsletter