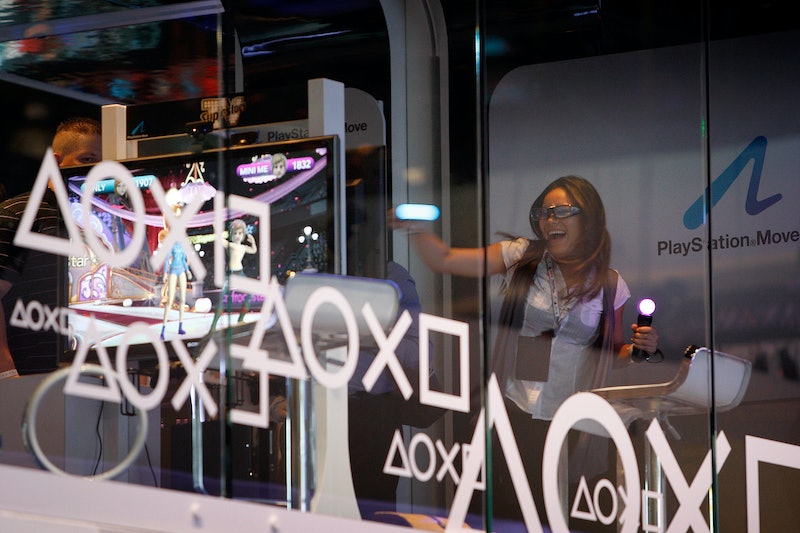 The social media movement known as #GamerGate is well into its third week, and doesn't show any signs of slowing down. Despite troubling indications of 4chan's typically nefarious involvement — as Wired details, countless so-called "sockpuppet" accounts have been used to leverage journalistic ethics as a shield for misogyny — the hashtag is still alive and well, and nothing if not passionate. But the anti-woman tenor within much of the gaming community isn't some new phenomenon. Just ask Anita Sarkeesian, who's been criticized, harassed and hated for nearly two years, over her video series deconstructing sexist tropes in video games.

The thing that's most striking about the opposition to Sarkeesian's work is that while her opposition comes in very different forms, ranging from simple criticism, to faux-intellectual documentarians, to outright virulent abuse, it's all pretty lightweight. There's a striking inability or unwillingness to grapple honestly or seriously with her arguments, to take her interest in the topic at face value, or to listen and understand to what she's even arguing in the first place.

This being so, maybe a primer will come in handy — here are four common arguments about Anita Sarkeesian's Tropes vs. Women in Video Games series, and why they utterly miss the mark.

1. Criticism of Sarkeesian Isn't About Misogyny

Sound familiar? If anything's been laid bare by the #GamerGate tumult, it's that it's easy to get people whipped up about perceived threats to things they love, assuming those threats come from a familiar cabal of boogeymen — or, in this case, boogeywomen. The backlash against Sarkeesian has seemingly been due to her gender, mixed with her willingness to speak straight-forwardly about sexist tropes in games. It's stoked the anger directed at so-called "Social Justice Warriors," a term some gamers snidely use to attack anyone with a progressive or feminist criticism of their culture or pastimes.

Similarly, as a male writer voicing support for her, such gamers might attack me as a "White Knight." A word of advice — when naming your opponents, try not to make them sound so unambiguously awesome.

The type of harassment she's received undercuts the idea that this is a war of competing, intellectual arguments. On the worst end of the spectrum, she's been sent emails depicting herself being raped by video game characters, as she detailed in a talk at a TED X conference.

But even when you listen to people who strenuously insist they're not harassers, sometimes their casual willingness to say disgusting things shines through. As a prime example, take YouTuber Jordan Owen, who along with cohort Davis Aurini are trying to crowdfund a documentary called "the Sarkeesian Effect." Their trailer announcing the project is almost a laughable self-parody of what you'd imagine, and they stress that the resulting film will be "a serious work of investigative journalism."

But then, when doing an interview with a prominent YouTuber and #GamerGate proponent named "MundaneMatt," Owen let this little gem slip out. One of the reasons he initially was okay with Sarkeesian? Her looks, framed in the grossest terms possible.

Also, obviously, she's fairly nice looking, you know, she doesn't, you know, she's — you don't look at her and think, my god, her labia probably looks like roast beef sliding off a plate.

Yup! Not about misogyny at all. Just a gentleman of the interwebs with a serious documentary to sell you.

If you peruse the wide world of anti-Sarkeesian videos available, you'll find no more repeated claim than this one — Anita is "cherry-picking" moments from popular games to make it seem like they're sexist, or cause sexism, when actually, they're not! This is a particularly misguided insight, because it crucially misunderstands the very nature of her video series.

Indeed, Sarkeesian openly acknowledges that in-game excuses for these sorts of recurring themes are often given. In the case of dark, creepy atmospheres, sexual or salacious violence is often used as a way to hammer home the depravity of your surroundings — "oh man, look, a dead hooker! I better stay on my toes, this place is messed up." But it's not about the case-by-case analysis of these games, it's about the pervasiveness of these themes across the broad swath.

More to the point, it's about the developers, writers and designers who all lazily rely on them — easier to make a suggestively posed female body, after all, than to give that body a worthwhile, realistic heart and mind.

Content don't just manifest out of thin air. People make it, and they're responsible for what they decide to present for public consumption — even moreso when they're objectifying women in a medium already overflowing with this representations. Basically, if she's "cherry-picking," it's because she's standing in a damn cherry grove. I can't stress this enough, having played games fairly routinely across a twenty-year period — if you can't see sexism's pervasiveness in games, you're willfully or haplessly blind.

3. Sarkeesian Isn't Even a Gamer!

This one's pretty silly, for a number of reasons. In the first place, she needn't play games to identify plot tropes. She's not writing reviews of these games, she's examining specific elements of their plots, stories, and worlds to support an opinion about the prevalence of sexism in games. It's not like reading a book — even watching a video of somebody else playing a game is all the proximity you need to analyze its themes. Being a "gamer" — a word which members of the community can be notoriously strident about excluding people from — is not a necessity.

Moreover, complaining that Sarkeesian isn't a "real gamer" to delegitimize her analysis is essentially arguing that accountability and criticism can only come from the inside. This is a dangerous perspective — given the intense insularity of some gaming communities, and the rather overt hostility to feminist critiques of culture and media that exists in them, these aren't views that are likely to just organically spring up on their own. People have to step forward and give voice to them, and for her trouble, Sarkeesian's been getting harassment and threats on a positively insane scale.

4. Her Kickstarter Backers Paid Her Too Much, and Got Ripped Off

A lot of derision is invariably cast on the people who enabled Sarkeesian to take this project on, the nearly 7,000 strong who donated via Kickstarted to fund her project. Despite only asking for $6,000, what Sarkeesian was offering was clearly so desperately craved that she netted over $150,000 in donations — as clear a case of people voting with their dollars as it gets, right?

But anti-Sarkeesian voices never tire of taunting the people who donated to her, and suggesting that they've been ripped off. The main reasons they claim this — first, Sarkeesian has only produced six videos since the Kickstarter closed, and second, she got so much money to do them, more than the quality of the videos suggests.

As to the quality, I can only say this — they look a hell of a lot better than the YouTube work of literally everyone I've ever seen criticizing her, shot crisply, and extremely well-edited and engaging. And obviously, she didn't ask for that much, she was given it in an outpouring of support.

But as for whether her backers have gotten their money's worth, they undeniably have. That's because, even beyond the awesome videos, they've also gotten a public crash course in being attacked by misogynist mobs online, thanks to the dismal couple of years of abuse Sarkeesian has suffered.

This must really boil the blood of her haters, because it didn't have to be like this — they could've accepted her videos as the good-natured, reasoned works of criticism they are, and kept on moving. But instead, they decided to rake her over the coals, and in doing so, they've proved her point in a way no YouTube series ever could.

More like this
Jennifer Coolidge Needs 'Legally Blonde 3' To Happen So She Stops Getting Hot Dog Jokes
By Jake Viswanath
What Is Ben Affleck's Net Worth? At 50, The Oscar Winner Makes 8 Figures Per Film
By Meg Walters
Naomi Osaka & Emma Raducanu’s Experiences Have Inspired A New Amazon Show
By El Hunt
Everything To Know About 'The Hunger Games' Prequel Movie
By Grace Wehniainen and Radhika Menon
Get Even More From Bustle — Sign Up For The Newsletter