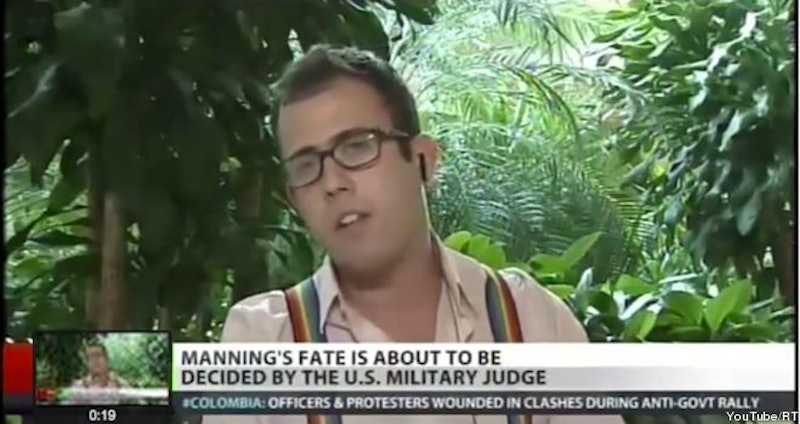 What does a gay, American journalist in Russia do when he hears the story of a gay, Russian journalist getting kicked off the air for "homosexual propaganda"?

Why, he propagandizes homosexuality himself. American journalist James Kirchick took advantage of an invitation from Russian TV (RT) to discuss the Bradley Manning trial to change the topic to the country's anti-gay laws instead. "Being here on a Kremlin-funded propaganda network, I’m going to wear my gay pride suspenders and speak out against the horrific, anti-gay legislation that Vladimir Putin has signed into law,” Kirchick said.

Did you really think he was going to let those awesome gay pride suspenders go to waste? When the hosts tried to get him back on the ostensible subject at hand, Kirchick replied “I'm not really interested in talking about Bradley Manning... You have 24 hours a day to lie about America, I am going to tell the truth with my two minutes.”

His two minutes ended soon thereafter, when Kirchick disappeared from the split-screen. Kirchick later tweeted that the driver who was supposed to take him to and from interview studio dropped him off on the side of the highway.

Had Russian TV looked at Kirchick's bio a little closer, perhaps they would have hesitated to invite him on in the first place. His reporting has long included a focus on international gay rights, and he has previously been named National Lesbian and Gay Journalists Association Journalist of the Year.

Instead, the uncomfortable host sloughed off Kirchick's accusations that she should "be ashamed of herself" for corroborating with the Kremlin, and later "apologized" to viewers with this statement:

We invited a guest on to discuss the fate of the whistleblower, but he used the chance to discuss his views on other unrelated issues and that’s why we had to take him off air. We would like to say sorry for any confusion caused.

You can watch the whole interview below:

More like this
Gen Z Are Twice As Likely To Identify As Queer, According To New Data
By Sam Ramsden
What The UK Blocking Scotland’s Gender Recognition Bill Means
By Sam Ramsden
The UK Government Is *Finally* Banning Conversion Therapy
By Sophie McEvoy
24 History-Making Black Women You Probably Didn't Learn About In School
By Ayana Lage and JR Thorpe
Get Even More From Bustle — Sign Up For The Newsletter
From hair trends to relationship advice, our daily newsletter has everything you need to sound like a person who’s on TikTok, even if you aren’t.