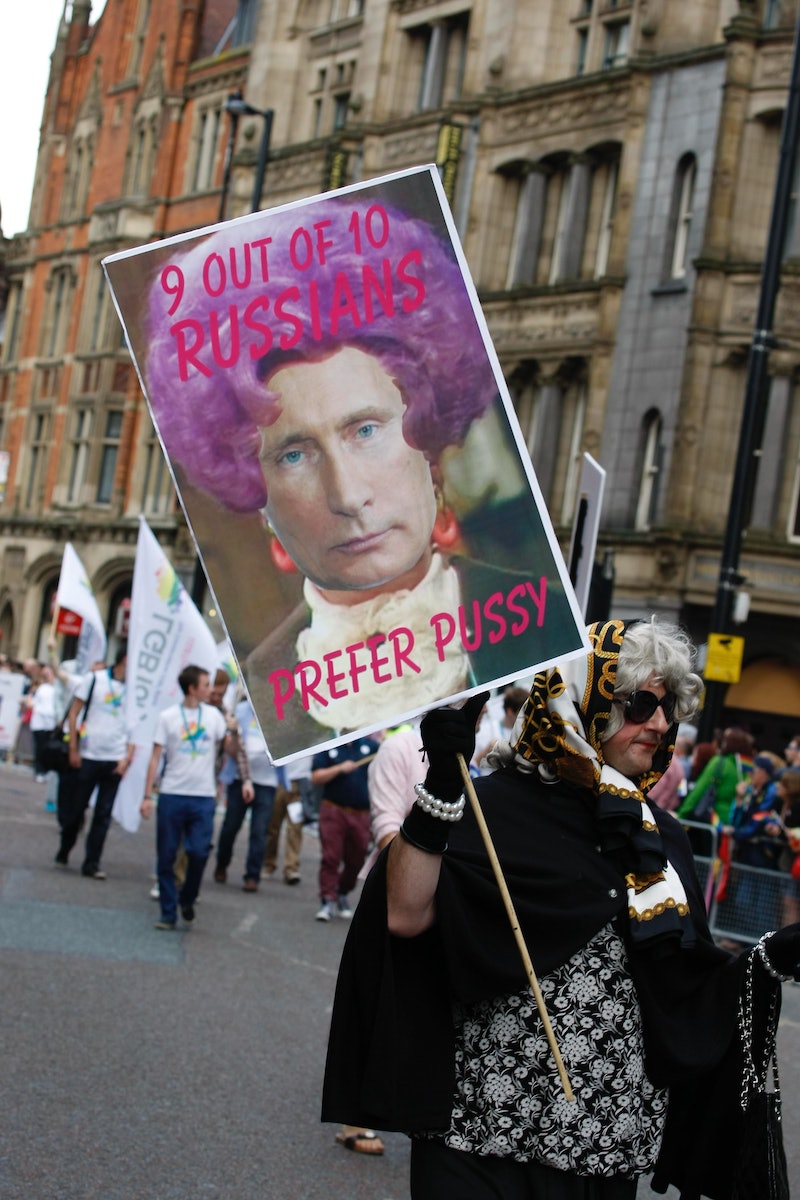 As Russian officials ramp up legislation banning "homosexual propaganda," everyone from Human Rights Watch to Californians to Jay Leno have come out swinging against President Putin and his Kremlin cohort. Thousands of people around the world have signed a petition asking the International Olympics Committee to reconsider their choice of Sochi 2014.

Over the past few days, international reporters have sought out stories of "what it's like to be gay" in Russia: The tale of TV anchor Anton Krasovsky, who was fired for coming on on screen earlier this year; the fallout for the 27 gay Russians profiled in a February edition of an alt-magazine; the vigilante groups harassing and dumping urine on young gays' heads. One man told The New Republic's Julia Ioffe: "Everything's gone savage here."

But what's the response been among Russians themselves?

A strong number of Russian LGBT organizations have been advocating and protesting on social networks ranging from Facebook and Twitter, to the more popular Vkontaktye and LiveJournal. As Miram Lanskoy of the National Endowment for Democracy told Gwen Ifil: "There's a more confident international gay rights movement," which has helped these groups gain "traction abroad."

But broadly speaking, the traction seems to be located almost exclusively abroad, and much of the criticism of LGBT discrimination is directed from the outside in. According to the New York Times' David Herszenhorn:

"An overwhelming 88 percent of Russians support the gay propaganda ban, according to a survey conducted in June by the All-Russian Public Opinion Center. A survey conducted in April by the Levada Center found that 35 percent of Russians believed that homosexuality was a disease and 43 percent believed that it was a bad habit, a result of poor parenting or a lack of discipline, or a symptom of abuse."

Russia is not the only government with anti-LGBT laws on the books — as the Kremlin keeps arguing, one could say they're not even among the most restrictive, since the 1994 "decriminalization" of gay sex. But for gay rights advocates who cover the biggest country in the world, that's not the question: In the later years of the Soviet Union, there was no gay rights movement comparable to the Stonewall-and-Harvey-Milk era of U.S. feminism. As Masha Lipman explains in the New Yorker, "gay rights have not become a nationwide issue until now, as the government has abruptly moved toward social conservatism."

Thus, the international response has left some Russians befuddled. And — oh, hey, Putin — this is just sad: