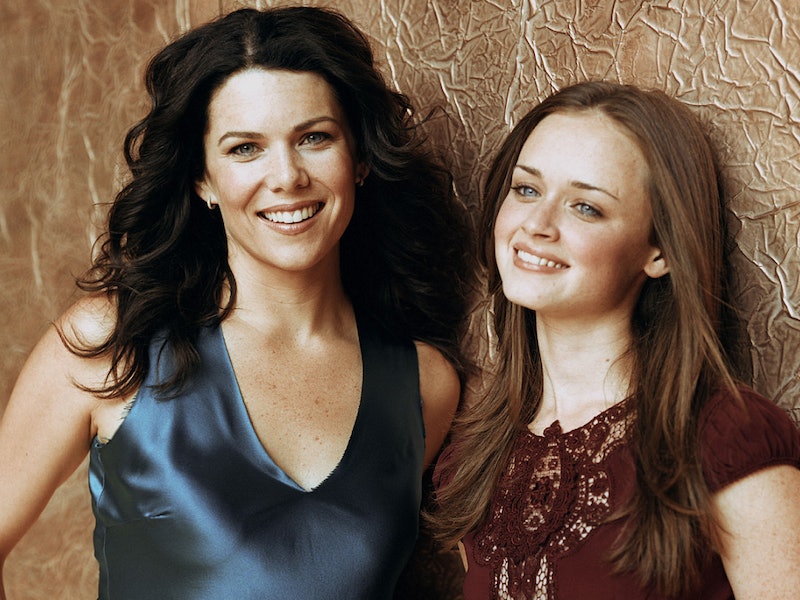 As a self-professed TV junkie, I don't throw around the term "favorite show" lightly, but Gilmore Girls is hands-down my favorite show of all time. So naturally I was more enthusiastic than any human being should be when I heard that all seven seasons of Gilmore Girls are coming to Netflix in October (who cares if I already have the entire box set at home?). Over the years, I have laughed as Lane got drunk at her first party, cried as Rory graduated from high school and then college, and clutched my fists in anger the whole time Lorelai and Rory were too stubborn to talk to one another.

More importantly, over the years I have come to gain many valuable relationship insights from the failures and successes of the show's dynamic duo. From dating as a single mother to losing your virginity, Gilmore Girls tackles nearly every issue and milestone that women face throughout their lifetimes with honesty and self-awareness. Time and again, Lorelai and Rory prove that being strong, independent women means occasionally admitting your failures and never settling for less than what you deserve. The relationship do's and don't's I've learned from the show are infinite, but here are my top five.

1. DON'T BE AFRAID TO SAY THOSE THREE MAGIC WORDS

On the eve of their three-month anniversary, Dean tells Rory he loves her, she becomes tongue-tied, and the two of them break up. As a viewer, it was painful to watch, but it also represented a moment entirely too familiar to those who've ever been in a serious relationship. As a society, we've placed a lot of pressure on reciprocating the words "I love you", so much so that it becomes a test of whether or not your partner is equally invested in the relationship. But saying those three words can be scary, and often places you in a position of extreme vulnerability. Fortunately, Rory was able to embrace this vulnerability and eventually articulate her feelings for Dean in the first season finale, inspiring us all to have the courage to put our hearts on the line. (Well, some of us — ex-Bachelor Juan Pablo Galavis would do well to follow in her example.)

It's been a tough decision to make, but Jess is decidedly my favorite love interest from the show. That being said, it was very clear that he and Rory were on different pages when it came to sex, in turn creating conflict in their relationship. As a high schooler watching the show (I was a little late to the game), I identified with Rory's hesitance to take the next step in her relationship, which is why I was even more proud when she resisted Jess's advances in season three. Feminists everywhere did a silent cheer!

3. IF YOU WANT SOMETHING, SEIZE IT

Lorelai's proposal to Luke was a refreshing reversal of traditional gender roles. And despite criticism from some of the townspeople that Luke wasn't the one to propose, the two of them made no apologies about the way it happened. This was also a moment of extreme courage for Lorelai, a woman who had often shied away from commitment. In this episode, she taught women to take charge of their own destinies, as well as their romantic lives.

Unquestionably Rory's biggest relationship mistake over all seven seasons was sleeping with Dean while he was married to Lindsay. The aftermath — being accosted by Lindsay's mother on the street, running into Lindsay at Doose's, and the huge blowout with Lorelai — proved than even beloved TV characters can't get away with cheating. Viewers learned alongside Rory that no matter what someone tells you or how much you love them, infidelity is never justified.

5. SOMETIMES THE RIGHT THING TO DO IS SAY GOODBYE

As adorable as Rory and Logan were (he can take second place to Jess), Rory made a bold and honorable decision by not accepting his proposal. She was unwilling to sacrifice her dream career, even for someone she loved dearly. Although we never got to see what become of Rory's romantic life after Logan, she ended the show with as much strength and grace as when it began.