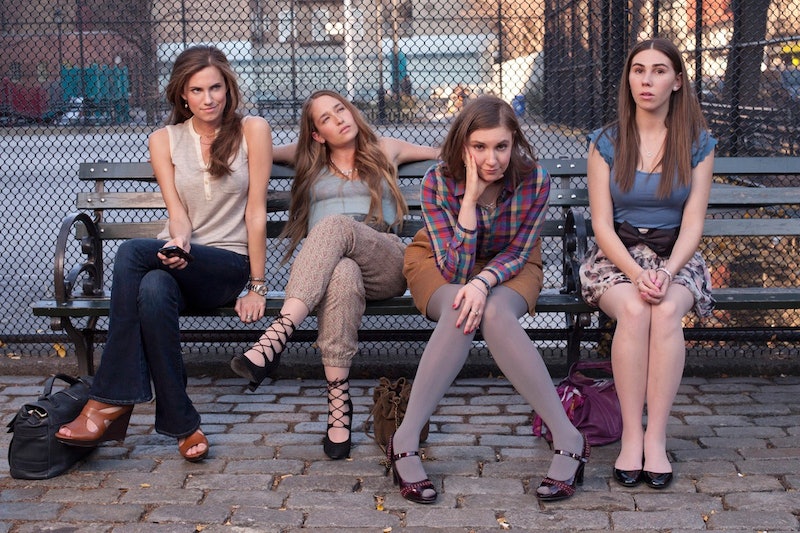 Taylor Swift, noted friend of Girls creator and star Lena Dunham, told Rolling Stone that she thinks she's most like Shoshanna on the show. To be honest, I find this a little self-indulgent, as Shoshanna is arguably the least horrible character on Girls, though it's pretty insulting to be compared to any of them. But Swift claims to have thought about this a lot, and she has reasons to back it up. Dunham, on the other hand, thinks Swift is most like Hannah or Marnie. Vulture asked Zosia Mamet, who plays Shoshanna on the show, who she thought Swift would be, but Mamet didn't think she knew Swift well enough to say.

She did express that she was happy about Swift's self-diagnosis. "But I was thrilled to hear that," she told Vulture. "And for Shoshanna, I was extra thrilled, because I think that she would wet herself and then happily die if she heard that."

There is arguably a little bit of each of the girls in all of us, though it's not always a nice part. Let's determine which girl Swift is most like, or at least, the one that her public persona most resembles.

Similarities: Swift gave her own reasons for being like Shoshanna. "Shoshanna gets excited about things, she's really girly. And when she was in a relationship that was very comfortable, she made the decision to get out and go experience new things on her own. And now she's becoming more sure of herself and taking life head-on, in a way that I can relate to."

Differences: Swift seems very cool and collected when she talks in a way that is basically the opposite of Shosh's signature fast-paced babble.

Similarities: Swift seems to see herself as a dork who's just trying to fit in (see her new video), and Hannah is certainly trying and failing to fit in, too.

Differences: It's sometimes hard to buy Swift's dorky persona when she is also so composed and successful. Unlike Hannah, she has it together.

Similarities: Marnie and Swift both carry themselves with poise, occasionally drawing the criticism of being a little cold. Out of all the girls, Marnie seems the most put together.

Differences: Unlike Marnie, Swift actually has the accomplishments to back up her aura of superiority. Marnie's confidence often seems misguided, making her come off as desperate and a little pathetic.

Similarities: There's definitely an ethereal, untouchable quality to Swift that she seems to share with Jessa, though that might just have to do with Swift's status as a pop star. Out of all the girls, Jessa's lifestyle choices and mannerisms seem closest to those of a famous artist.

Differences: Swift's style is decidedly not bohemian, and she is certainly nowhere close to the mess that is Jessa.

I'm with Dunham in that I think that Swift is closest to Marnie, "if she wasn't an asshole." However, it might just be that the public, composed version of Swift is what's closest to the aloof, beautiful Marnie. Swift would know best, and if she thinks she's a Shoshanna at heart, I'll give it to her.