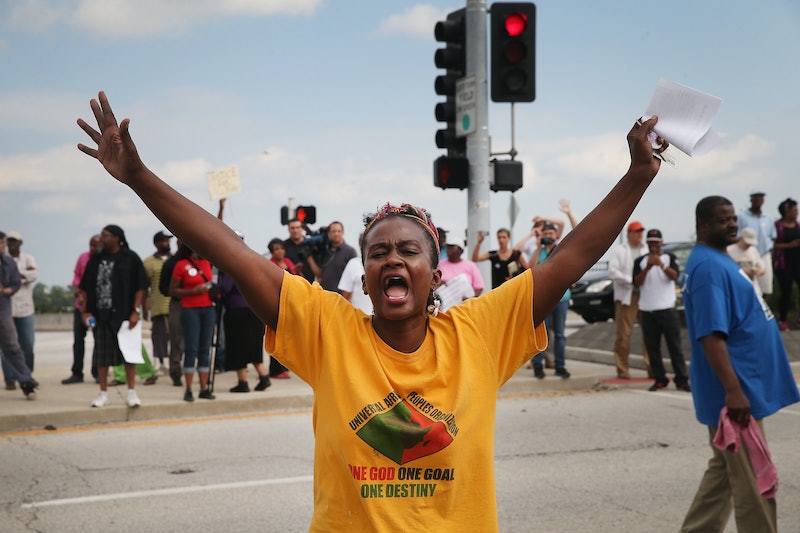 The mantra of "hands up, don't shoot" gained new force Friday, after the release of a cellphone video showing Ferguson witnesses just after Michael Brown's shooting. The super-brief footage, released by CNN this week, shows two construction workers who allegedly caught the whole thing, raising their arms in apparent mimicry of what they'd just seen. Though this just supports what other witnesses have been saying for ages — that Brown surrendered before being shot by Police Officer Darren Wilson — some are touting this as game-changing evidence.

The footage, which is shot by a cellphone camera, from an oddly low vantage point on the ground, shows two men standing beside a truck. According to CNN, the two are construction workers from outside Ferguson, and they were working for a company based outside of St Louis. In the video, one of the contractors puts his arms up, saying: "Man, he was going like this." Later, one of the workers adds: "He had his f*cking hands in the air.”

The video evidence harkens back to the initial version of events Ferguson witnesses gave police and reporters. That story — that Brown was another unarmed black man, who'd put his hands up, clearly surrendering, before being fatally shot several times — is what spurred the chaotic weeks of protest in Ferguson and across the U.S.

"The cop didn't say get on the ground. He just kept shooting," one of the workers, who hasn't been named, told CNN. Later, in a separate interview with KTVI, a St. Louis TV station, he added: "When he [Brown] finally caught himself he threw his hands up and started screaming, 'OK, OK, OK, OK, OK, OK."

While all new evidence is definitely useful evidence, it's not clear whether this is really game-changing. For one thing, it doesn't show the actual shooting, it just purports to show the moments just after the incident — it's perfectly possible, though, that the video was shot half an hour later. It's also not clear how close the construction workers were to the scene; although they say now that they witnessed it quite clearly, the truth is, we can't tell that from the video.

Not everyone feels that way, though. Said Benjamin Crump, the Brown family's attorney, in a statement:

The video is of paramount significance, not just because these two construction workers are not Ferguson residents, and not because the construction workers were caucasian, but because it is a contemporaneous recording of their immediate actions of what they had just witnessed.It's the best evidence you can have other than a video of the actual shooting itself.It captures their raw emotions and their outrage over what they just witnessed. It is like you are watching a live play by play of what just happened."

Admittedly, with the world still enraged over the police reaction to the shooting, there's something satisfyingly vindicating about having new footage from the fateful day. Added Crump:

More like this
Michigan’s Governor Is “Going To Fight Like Hell” To Protect Abortion Access
By Andrea Zelinski
How To Fight For Reproductive Rights, Based On How Much Time You Have
By Courtney Young
Plan C Vs. Plan B: What's The Difference?
By Lexi Inks
Harry Styles Called For "Backlash" In Powerful Statement On Abortion Rights
By El Hunt
Get Even More From Bustle — Sign Up For The Newsletter