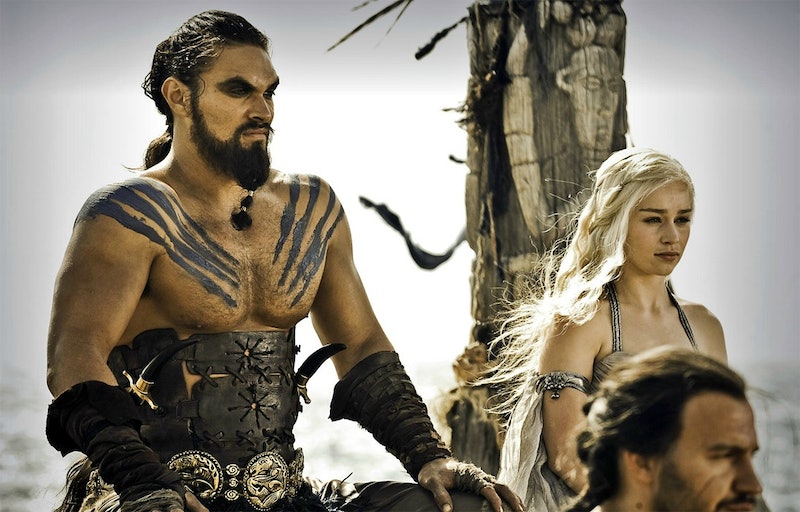 Once upon a time, there was a man who only taught his son Klingon — that is, the language spoken by the Klingonese of Star Trek — for three whole years. Back then, teaching and speaking a fictional language might have been pretty bizarre and the stuff of documentaries like Trekkies , but now, only a few years later and people are all about it. Apparently, speaking a fictional language has taken off so much in fact, that Living Language will be offering a course in Dothraki, the language of the nomadic warriors from Game of Thrones. And I thought French was hard.

In the form of a book and CD, a Dothraki course will be available in October to teach all those interested the key to Dothraki pronunciation, grammar, 200 vocabulary words, dialogue and more, according to Uproxx . There’s no telling what words will come up in the course, but it would definitely be convenient if they included crucial phrases like, “Where is the bathroom?” in there somewhere, just in case we ever find ourselves in Dothraki territory. Of course.

Before you begin your journey to wooing that Khaleesi you’ve had your eye on for some time, though, first note that this beginners course starts at a price of $19.99. And for $30, a Dothraki Expanded Online Course is also available with more than 500 Dothraki words and even more phrases.

Honestly, considering it costs hundreds of dollars just to get Rosetta Stone, this actually seems pretty reasonable. If you’re really great with languages, you’ll probably be able to go from “See Spot run,” to “Can I buy you that drink?” in no time.

Or would it be, “Can I get you one Dragon Claw goblet of wine?”

Okay, I’m not actually positive that phrases like that will be included in the course, but at least learning Dothraki will be useful for things like impressing your crush (if they're cool enough, of course), or tricking people into thinking you’re an exotic foreigner.

On the other hand, unless you plan on explaining what you’re saying every time you speak Dothraki to people, I’m not sure the course is worth the money. Plus, let’s be real: No one will ever sound as sexy as Khal Drogo. #sorrynotsorry